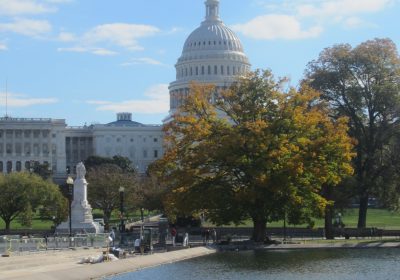 For eight years, a weak recessionary recovery has prevailed. With so many jobs outsourced, and with the continued war-time militarization taking place in U.S.-NATO command bases around the globe, the Democrats have barely resisted the call for deeper austerity measures at home. With the former President, what was accepted as Orwellian diplomacy and shape-shifting of data to fit the press, may now yield to the bellicose and impulsive tyranny of President Donald Trump in the Oval Office.

It would be a chance for the public to revel in the paradox of a successful businessman and billionaire as the final Democratic comeuppance, but the blowback from cabinet nominees with a Wall-Street agenda has given rise to new economic jitters.

Over the past weeks, early into the Trump Administration, people are participating in demonstrations, marches, protests, and filling town halls. Carrying placards, chanting, and hoping to draw attention to their objections on anything from President Trump’s nominees for cabinet to executive orders on immigration.

Evidently these are crowds who see the writing on the wall: they want to preempt the slash to social services, cuts to affordable healthcare, and changes to education before they occur. They resent that after over fifteen years of continuous wars in the Near East, the obscene levels of military spending continue spiraling up.

For instance, a new program for the F-35 fighter jets is projected to cost 1.4 trillion dollars over the next fifty years. That is 28 billion dollars per year. With total military spending including wages and benefits estimated at 1 trillion per year, elected national leaders believe that cuts to on domestic spending are necessary.

All that is necessary is quite obvious. Steps towards disarmament can easily be undertaken as illustrated by pro-peace organizations such as Code Pink and World Beyond War. We can and must divest from militarization. We must invest in emergency climate change and infrastructure building before it’s too late.

Unfortunately, it is highly doubtful, given the anti-intellectual antiquarian views of the incoming administration, that anything will be done except implement austerity programs long drawn up by neoconservative think-tanks such as by the Heritage Foundation. Restructuring lobbyists and attorneys are gleeful over cabinet like-minded neoconservatives from Vice-President Mike Pence on down. Given their usual cut, whether filing bankruptcies, managing pensions, or overhauling services, it’s no wonder their offices are only a short walk from Congress or the White House.

We’re seeing this over and over. Just enough Democrats are voting for Trump’s appointees to enable their confirmation. In some cases, dangerous and unqualified appointees are getting confirmed with little or no Democratic objection. That’s not what an opposition party does.

To date, exactly zero of the nominees put forth have been turned down, despite troubling conflict of interests, possibly treasonous actions, inadequate experience, lack of relevant certifications, and extreme views.

The politics of austerity and trickle-down cruelty are being put in place and soon enough the squeeze will be on. Billionaires and elitist-supporters hope that by occupying the White House, fully backed by a Republican Congress, they will enact change with only symbolic resistance put up by the Democrats.

The perspective of a clan of elitists and their cheerleaders will accelerate and seal the fates of those destined to suffer. Being part of global corporations, the elite and their cheering squad possess neo-patriotic views especially when it comes to corporate welfare and outsourcing labor. Brute worship of the dollar and eagerness for capital goad such into ridiculing the poor and robbing them of their needs.

In “Trickle-down Cruelty and the Politics of Austerity” leftist theorist Henry A. Giroux depicts the neoconservative paradigm, one in which morality becomes a cliché “devoid of any obligations to the other or responsibility for our collective well-being.” This is the corporate-sponsored view increasingly prevalent due to widening gaps in socioeconomic prosperity. Neoconservatives’ downgrading of government agencies offering culture, healthcare, education, research, planning, and so on is to justify Wall Street attempts to privatize, deregulate, and commodify all things public.

“Public services are either viewed as a drain on the market or rendered as a pathology,” Giroux declares inYouth in Revolt. Quoting from another author, Lawrence Grossberg in Caught in the Crossfire: Kids, Politics, and America’s Future:

The working and middle classes have been condemned to ‘a new modernity in which there can be only one kind of value, market value; one kind of success, profit; one kind of existence, commodities; and one kind of social relationship, market.’

It is not just the poor and disenfranchised who are suffering, however. Failing suburban neighborhoods emanate ripple effects in lower and middle-class neighborhoods. While income has grown for the top strata in society, nearly half of Americans are living in poverty or know someone who is barely getting by.

However the elite (arguably neither Democrat nor Republican), who may own a somewhat exhibitionist tyrannical mindset either in public or private life, are unable to view themselves as harboring sociopathic desires. It is not even white-collar crime if they offshore most of their wealth; employ illegal immigrants while denying so; conduct insider trading; or seek ways to profit at the expense of the American public.

Plainly, morality takes on a different shape in the spheres that elites occupy. Using the police to send troublemakers to prison, breaking the unions, sacking pensions by declaring a city bankrupt (as with Detroit), or conducting state torture are all ends that justify the cruel means by which their interests are now promulgated.

As the welfare state is dismantled, it is being replaced by the harsh realities of the punishing state. Consequently, social problems are criminalized and social protections are either eliminated or fatally weakened. —Henry A. Giroux

Left-wing thinkers argue that young people, people of color, and even middle and working classes will especially be left in a state of poverty, despair, and insecurity.

Trump revealed for who he represents

Americans realize that their rights to jobs, healthcare, decent and affordable education, reasonably priced housing, and a habitas of civility and community are being replaced with the culture of nihilism, casino-capitalism, and Wild-West decadence undoing the previous century of arbiters of Rooseveltian goodwill.

Neither will we lose our equanimity nor allow ourselves to be undone by all the new dog-in-the-manger cabinet appointments.

If Occupy Wall Street taught youth any important lessons, it was learning what they are up against and how to organize. This is undoubtedly why more citizens than ever are registered as independent voters. More people are reading progressive, green, and socialist-party books because President Trump is proving through his nominees, Executive Orders, and memorandums whose side he is on.

Arguably Donald Trump has never been any more of a populist leader for the working people than Barack Obama–and no more likely a peace-maker either.

The socialist online newspaper People’s Tribune describes Trump’s cabinet picks as indicative of who he represents. Obviously, Trump counts himself among the top American ruling class, intending to wield power through his nominees in order to “reconstruct our society in a way that’s most profitable” for his privileged strata.

In fact, hardly any of Trump’s nominees are career civil servants with decades of pertinent knowledge, qualifications, or experience. They are drawn mostly from the upper-echelons of corporate society, politicos who don’t even actually need to work for a living, and whose primary interest will be to serve as dogs-in-the-manger: turning everything upside-down before the inevitable down-sizing and privatization.

For instance, the Secretary of State will clear the way for the fossil fuels industry primacy; the Department of Energy will ensure that climate change mandates will be scrapped; the Environment Protection Agency will support “drill, baby, drill” with nothing standing in the way of toxic waste dumps; the Department of Treasury will print money for Wall Street; the Secretary of Education will militate against equalizing public education; under the Housing and Urban Development multi-millionaire, record levels of homelessness arise; and all social services are gradually defunded under the new Health and Human Services Secretary. Meanwhile, the Department of Labor will tell us the job market is looking very rosy indeed.

According to the Socialist Equality Party, this process is already well underway. InThe Truth Behind the Bankruptcy of Detroit, the Workers Inquiry details how it was a bipartisan group of elected neoliberal politicians who orchestrated Detroit city’s meltdown. They put in place Jones Day attorney Kevin Orr as an emergency manager, because they knew he would operate as their restructuring counsel lap-dog. People were put on the street, had their water tap shut off, and lost their hopes and dreams.

Lobbyist and corporate-influenced legislators want to expedite the Detroit restructuring blueprint under the Trump Administration. Whether technology is used to combat global warming or social organizing, such research will largely be redirected towards advancing global militarization and stock-driven robotics at the expense of increasing numbers of the workers, the middle-class, and the elderly.

We must act while we can

This is exactly why a massive public challenge is needed immediately, even while the Trump Administration attempts to place hiring freezes on the federal government (except for those working in defense); minimize expenses for the Affordable Care Act; remove all obstacles for the Keystone Pipeline (in which Trump has economic interest); and stop the flow of immigrants into America.

Protesters and demonstrators, mostly younger people, will not be cauterized by words, or anti-democratic Executive Orders. Big corporate media cannot bombard and browbeat us into submitting to a fake democracy, one in which the “neoliberal theater of cruelty is coded as unquestionable, as unmovable as an urban skyscraper.”

People are being unified rather than divided, as they should be when their inalienable human rights are attacked. People are suffering violence daily, albeit “in the form of corrupt legislation and a political ideology that strips the government of its universal social protections; removes government oversight; builds on fear; decimates the power of unions; defunds public institutions; and expands the culture of cruelty, fraud, and avarice through policies that perpetuate a crushing inequality.”

A political revolution, according to the Progressive Left, the Green Party, the Socialist Workers of America, and the Socialist Equality Party, is being forced upon us.