Tribute to Kevin Zeese from the No War Conference 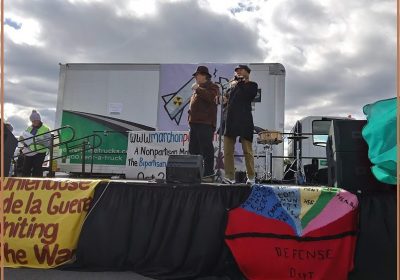 Kevin Zeese, Writer, Lawyer, Advisor for the Green Party, World Beyond War, *Occupy DC, NORML, and defender of Wikileaks Founder Julian Assange, passed away on September 6, 2020, from a heart attack during sleep. As many have noted, the world has lost a great man who not only believed in grassroots activism, but thought it, shared it, lived it, and led it.

According to Popular Resistance, that weekend Mr. Zeese was preparing a newsletter and grassroots organizing event to express support against the extradition of Julian Assange to the United States. (Julian Assange is the founder of Wikileaks and has been unjustly imprisoned or forced into hiding since 2011. His UK trial is widely viewed by independent media as an assault on independent journalism, a fact verifiable by the purposeful ignorance of ongoing imprisonment and trial, infringements on rights, deteriorating health, secret tortures, and the fact that he is an Australian citizen, by most mainstream media outlets.)

As 60s-style activists across America recall, Kevin Zeese understood the stratagems of the Deep State and how it seeks to divide the American people to prevent full-scale movements starting from Vietnam. In his 8-class course offered at Popular Resistance, “How Social Transformation Occurs”, Zeese & Flowers taught social movement building and what it takes for people to pull together. They invite people to join the peace and social justice movement, teach how to draw people from diverse backgrounds into a global movement, one which they recognize is critical for humanity’s survival up till 2030 due to incipient climate change, overpopulation, diminishing clean water, drug trafficking, and the threat of nuclear war.

As David Swanson, Founder of World Beyond War, and author of War is a Lie, writes in his tribute:

His eulogy includes Guest Panelist Kevin Zeese at the World Beyond War Conference in Toronto, Canada in 2018:

In fact, Reverend Martin Luther King, Jr.’s call for compassionate-loving-togetherness-feelings are abandoned in today’s movements which descend into maelstroms of fear-mongering and violence, naturally begetting more violence and oppression from the police-state as internal fall-out. Americans must watch a national news media saturated with hours of repetition with staged debates, race riots, and political protests. Often, zero time is spent on authentic grassroots peace and social-justice gatherings and conferences.

Here is another video clip uploaded by Presente! Task Force on the Americas at the United National Antiwar Coalition:

The transcript from the Stop the Wars at Home and Abroad! video is provided by long-time partner Dr. Margaret Flowers and posted at DissidentVoice.org. Here are his stark words from the United National AntiWar Coalition (UNAC) online rally on August 30, 2020 about how to build power for the changes we need before and after the coming election:

We need to build power, so that in 2021 people can rule from below…That is the only way change will occur. It will not come from Joe Biden or Donald Trump. It will come from the people…But Biden is no better. And I mean no better. For 47 years he’s been wrong on every important issue. When I was in college going to an anti-racism demonstration in Boston in favor of school integration, at that time Biden opposed school integration. Then I worked on ending mass incarceration, ending the drug war, while Biden was passing laws to escalate the drug war, passing laws for mandatory sentencing to increase mass incarceration. He’s the architect of mass incarceration! Later in his career Biden became chair of the Senate Foreign Relations Committee and led in not just voting for the Iraq War, but in the effort to make the Iraq War happen. As chair of Foreign Relations, he put in place massive military budgets, bloated corrupt budgets, while leading us into war after war. When it came to student bankruptcy, he led the effort to make it so students can’t get rid of student debt even in bankruptcy. Now he’s even calling for cutting Social Security when we should be doubling or even tripling Social Security payments. So I’m going to vote against Trump by voting for what I believe in. There are more alternatives than the two parties. I’ll be voting for the Green [Party] candidates Howie Hawkins and Angela Walker, because I’m going to be voting for Medicare for All. I’m going to be voting for community control of the police, for the eco-socialist Green New Deal, for ending the wealth divide and ending the never-ending wars.

Finally here is the two-hour live-stream event from Popular Resistance‘s September 19, 2020 Memorial by Kevin’s family. “He was a father, a public interest lawyer, a writer, an activist and so much more. Hear about his life and legacy from friends and family.”

Kevin wrote and spoke so well, but most important was his optimism. His energy and his optimism, and it’s why people invited both of you, Kevin and Margaret, a team, to every coalition, every organizing event. And that is there was just no cynicism, never sectarian, really genuinely enthusiastic…—Sara Flounders, Workers World Party

Kevin’s passing was not just a tremendous loss to our movement but a huge personal loss for me; Kevin was not only a very dear comrade to me; he was also a close friend and a brother. Our work together goes back a long time. Through the years I benefited enormously from Kevin’s profound knowledge, wisdom, and anti-imperialist commitment and vision. He was a genuine fine fighter for peace and socialism, and its root internationalist. Kevin had a very sharp analytical mind and an unwavering commitment to the struggle for peace and justice…—Bahman Azad, U.S. Peace Council

“Let me close by saying we are confronting in this front of struggle, the center of racism, economic injustice, environmental injustice, and militarism. We are facing the centerpiece of it all. We’re facing it at a time in this next ten years when many crises are coming to a head. So it’s so important for us to be doing what we are doing, so important for us to be understanding what we are doing, and to be in a position as moments come up, and there will be moments of opportunity sometimes a threatened attack, sometimes a torture moment, sometimes a positive example of peace. We’ve got to be in a position to know what we are doing to create the kind of mass movement that can win this effort. It is achievable, we can do it, and don’t let them tell us we can’t. Thank you all very much.”—Kevin Zeese, #NoWar2018