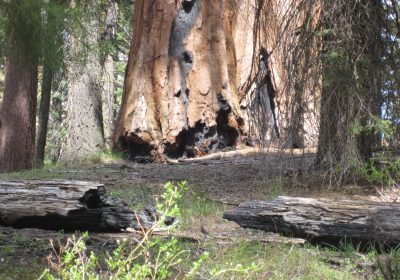 There is no doubt that the drought from the past several years has hit the Sierra Nevada forests hard. Any visitor to the Kings Canyon National Park above the Central Valley foothills can see signs of the devastation just about everywhere. Spokespersons with the Sequoia Parks Conservancy, and National Park, told AGN this June that the fire was enabled by many contributing factors. Factors included undergrowth as dry as kindling, steep inclines on both sides of the highway, mistral-like winds—even lichen growing on rocks—enabled the embers’ flaming along the River up the embankment. Because every time firefighters thought the fire was dead, it roared back to life, Rough was dubbed the “Zombie Fire.” According to the Visitor Center display, up to 4000 people were involved at one time. However the numbers also dropped below 3000 before Labor Day; and the fire roared to new heights. Rough Fire swept up the hills and gullies

According to the Incident Commander Rocky Opliger:

This was an aggressive and dangerous fire. Every day our concern was for firefighter and public safety.

The ash and embers from the fire blew far away into California cities and towns. And the overcast caused children to have to play indoors due to exceptionally poor air quality. At least several firefighters were injured or suffered smoke inhalation issues. Dust and ash lingered for days adding to the pollution layer The fire raged between Big Meadows north to Boyden Cave, and east all the way to Cedar Grove Village. The view up above the mountains from Hume Lake, a private Christian camp, is especially poignant. Charred stumps and trees struggling to survive after 2015 fire

A dead or dying forest transmits a sense of surreal suffering. The pain enveloping stands of dead trees is visible from the dearth of wildlife making them more haunted. Its not worth it whether for occult recreational purposes or for environmentalists’ contemplation of the blight as related to fossil fuels, to have to retain all of them. Recently, ABC News aired a news clip of Caltrans logging dead trees along Highway 41. Trees are being removed as part of a 1.5 million dollar contract. Altogether 14 million dollars is stated to be spent by Caltrans on tree removal. Over the past year, the Forest Service fire crew has also been felling hazardous trees near roads and thinning out trees to improve survival rates—and improve the conservation of resources.