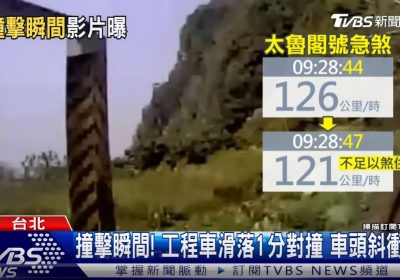 On Friday April 2, 2021 near Hualien City along Eastern Taiwan’s scenic coast, there was a horrific train crash at 9:28am. A construction lorry had rolled down an embankment toward an oncoming train approaching a tunnel and heading south. The lorry blocked the train in a sideways position along the track, and the oncoming train slammed against it causing the smashing of several train cars and train derailment. In immediate breaking footage and reports, it appears that at least 50 people were killed or died shortly after. Hundreds of injuries were reported and many were transported to local hospitals. Care organizations such as Red Cross and Tzu-Chi set up relief tents helping people connect with loved ones, and comforting those in need.

In the days afterward, the Tai-Tie train company (TRA) assured the public that they would have the tunnel cleared within seven days. Live-streaming by Taiwanese news outlets since April 2, 2021 shows rail crew and a host of experts onsite working non-stop day and night rebuilding the track, inspecting the eight train cars, removing the injured as well as the dead. What has made it particularly tragic is that many of the passengers were on their way to what is known as “Tomb-Sweeping” holiday, during which relatives pay their respect to their ancestors visiting cemetaries or memorials. What is a somber weekend holiday was made more somber in this centuries old custom. Double ceremonies were held all weekend long for the newly dead who must now be laid to rest.

Hualien City is a symbol of Buddhism because it is where the main Tzu-Chi Pure-Land monastery is located. Tzu-Chi, which runs humanitarian missions all around the world, and specializes in disaster recovery services, now has to refocus its care on a disaster at its doorstep. With years of experience, it immediately ramped up its field medical care units, hospital care, and called for backup volunteers to set up tents, provide nourishment, cots, and different types of outreach for grieving families.

As journalists, emergency personnel, and government officials pour into the disaster scene, every day many news reports and live interviews are taking place. Over the past weekend, Taiwan President Tsai visited injured passengers in medical hospitals, and promised a full investigation. At large is the construction lorry owner Li Yi Xiang, a worker who was taken into police custody but released on $50,000 bail only a couple days later. Taiwanese media are not officially allowed to discuss the case as it is being investigated but have commented on what is publicly available, such as footage showing the lorry parked in the most precarious way both in chosen location and position and manner of parking, as if for a maximum rolling down effect.

What the photographs also show is that while there was ample room to park at the level construction landing parking lot, where most heavy rigs were parked. Instead, Li Yi Xiang deliberately chose to park his lorry along the steep roadway with gradient sloping downward toward the railroad track. He parked the lorry head first with its wheels at the edge of the embankment in such a way that the slightest jolt would send it tumbling into the ravine. He did not bother setting the emergency brakes. Other footage indicates that he seemed cognizant of what he was doing and was checking his phone device, carrying on some communication, and observing as if in expectation as the crash occurred.

Moderated talk shows and public commentary are limited while the investigation is still taking place, yet other footage reveal him slipping some cash to a superintendent just after the crash for some reason. Evidently the connections surrounding Li Yi Xiang are murky, especially with a patchy work record, on whether or not he had fully undergone a national security clearance. There are many construction workers in the vicinity because of the new tunnel project and rail line construction on the adjacent track east. The workers may come from many different parts of the country, and some may even be foreign-based workers. Questions over security are a valid concern because Taiwan has long-been known as a major stop for traffickers readying to smuggle opium or commodities to North America. Was this a warning or retaliation for investigation into railway connected syndicated crime?

The questions are not far-fetched, and the present impacts involve not just a loss of life but a blow for the railway company, whether absorbing legal fines, eroding customer trust, or a shaky image with regard to oversight. In contrast, this is why when China (PRC) undertakes the completion of a new railway system whether in China or outside its borders, it offers a mandatory certification program for railway operators. Completing a rigorous program, the future railway operators learn the mechanics behind the rail system, how to navigate when there are obstacles, and how to safely evacuate the train. Those who pass the course learn to appreciate all aspects of their work and are ready to guard their train with their lives.

However it is known that the East Taiwan rail system is vulnerable due to its age, heavy train ridership, and using ancient technology. An investigation into a previous accident on October 2018 that resulted in 18 deaths discloses that the track gauge is narrower due to construction challenges when it was first built by the Japanese. During the 1910s-1930s constructing the rail corridor would have been an engineering feat given that it passes many steep ocean-side slopes, incorporates rock-face tunnel construction, and allows for tilting train cars (Taroko class) with a higher center of gravity so that the train can round horizontal curves more speedily. Nevertheless, the corridor is so narrow that expanding to double-track has fallen decades behind, and even today significant portions are still single track along the route meaning both northbound and southbound passenger trains share the same track. Additionally, stress and strain on the track itself can occur when both freight and passenger trains are closely spaced but heading in opposite directions along the same track especially when laden with different types of burden

What was cutting edge technology in early 20th century has become outdated and today the rail line is a victim of its own success. The Taitung route is extremely popular because it is the only way to get to the scenic eastern coast quickly. At times the demands are heavy enough that the train spacing in frequency is as often as in urban subways, every few minutes at peak. Records indicate that on this date, the express train was filled to capacity (496 passengers) with standing room only for the lowest fares. The older model rail cars, while providing comfortable seating, have windows that cannot be opened for emergency exiting. The passengers had options to egress and exit mainly through the doors at the front and back, although there is a roof hatch which was used to help passengers off the train by emergency personnel. From the roof hatch there appeared to be no ladders upon which to climb down. Passengers also reported having broken windows to get out, as it was likely that front or back ends of the cars were partially smashed. The passenger trains are moderate in speed capability because the rail lines cannot accommodate all the train traffic enroute. Furthermore, construction to expand or build a modern railway along the east coast has long been slow or hampered due to harsh weather, occasional earthquakes, and landslides.

Meanwhile along the western rail corridor, Taiwan has constructed quality high-speed rail lines that allow passengers to comfortably travel North to South in just a few hours. The worry of crashes from at-grade crossings is still a concern for rail-lines around the world. Having been aboard an Amtrak when such a crash occurred, this reporter can attest that it is the nadir of one’s travel experience. Much can be invested to ensure that better prevention measures are taken, from installing protective barriers along the roadway to using advanced digital signaling systems perhaps with the aid of satellite and drone technology. Research must also be ongoing to improve the response time for emergency brake systems.

In the Hualien train crash, it is not certain that much could have been done in this case because the worst part of the crash occurred inside the Qing Sui tunnel where the passenger cars jammed onto one another against the tunnel walls. The last rail cars, those stopped from entering due to the jam, were left relatively unscathed. Removing the train cars from the tunnel has involved a lot of construction effort as the tracks have to be examined, repaired, railroad ties replaced with new precasts, and the damaged train cars carefully investigated. Doctors from nearby hospitals are still trying to identify bodily remains from the scene with matching DNA blood samples. Much effort is expended in safely dragging the rail cars intact out of the tunnel using excavators and drag lines. Groups of workers representing the rail company, supervisors, construction laborers, drivers, heavy equipment operators, machinists, mechanics, electricians, engineers, inspectors, police, detectives, medical technicians, armed services, a bevy of journalists and relief workers are shown performing tasks or standing by for impromptu services in the livestream.

By Day 6, all the passenger cars are out of the tunnel, which is ahead of schedule, and what remains is being readied for hauling along the tracks miles back to the train depot.