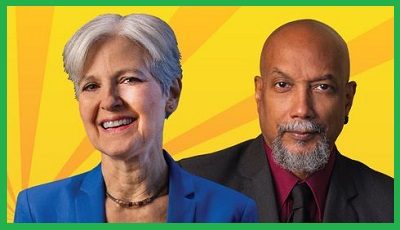 However you couldn’t tell by the media that the former Secretary of State has anything to worry about. Mr. Trump is the one with major health problems, a lot of marital infidelities, refusal to come clean on business dealings, and tax evasions. Not so, according to Dregs of the Future’s “Hillary is a Disaster” exposé.

From the recent rise in “Clinton body counts” to a great deal of lucre which the Clintons have accrued (four huge mansions, no less) from their business dealings through the Clinton Foundation, to the actual details surrounding both the Clintons’ health conditions, all of this can only be found in alternative media; no wonder the former Secretary of State threatens to shut them down.

Many of the former Bernie Sanders supporters are left in a quandary. Bernie Sanders himself was not that clean; however, he vowed to try to take on big business using rhetoric in speeches that sounded reminiscent of FDR.

Today, these ideals are best embodied by major third parties such as the Green Party, and the Socialist Equality Party.

Dr. Jill Stein’s platform may seem a bit square, yet her ideals are resonating with more young people than ever, left in a quandary after Bernie Sanders’ defeat in the primary. There’s no reason we have to continue on the march to the right, towards a totalitarian neoliberal world order, while facing increasing austerity measures at home.

As usual, while the mainstream media paints the Green Party candidates as left-wing nutcases who only make the news when they are arrested, citizens have to try to discover exactly why so many environmentalists are concerned with the Bakken pipeline passing through the Yellowstone region.

They’ve been camping and marching for weeks, along with brave aboriginal natives to help raise awareness that they live in a fragile environment that’s taken 5 million to 24 million years to form whether underground or near faultlines.

The Ogallala Aquifer is described by writer Laurence Pringle as lying along the eastern edge of the arid West.

Named after a western tribe of Sioux nation, this storehouse of water was created long before any Indians or other humans lived. Between 5 million and 24 million years ago, erosion of the eastern front of the Rocky Mountains brought sand, gravel, and other sediments to the lowlands. Water from the plentiful rainfall of that period saturated these deposits and was trapped between a bottom layer of shale and a top later of erosion-resistent rock.

The Ogallala aquifer may be the largest underwater reserve of fresh water on earth. It holds an estimated 2 billion acre-feet….

While 2 billion acre-feet seems like a lot of water, it is still a finite amount, and humans are wasting this precious resource at a rate that it will never be able to replenish. It is a great concern because the area over which the aquifer stretches—800 miles underlying parts of eight High Plains states from South Dakota to Texas—receives sparse rainfall. In fact, prior to the development of modern pumps, the West was considered marginally habitable. Explorer John Wesley Powell once stated to the International Irrigation Congress of 1893 in Los Angeles (with loud booes):

I tell you gentlemen, you are piling up a heritage of conflict and litigation over water rights, for there is not sufficient water to supply the land.

Modern industrial civilization with her farms, her hydrofracking wells, her thirsty cities, and her cattle ranches rely on the Ogallala water. And it will rely on it even more whether or not large open water sources are polluted.

Too much of the Missouri and Colorado Rivers are being diverted for use by humankind, to the extent that native fish have become extinct; the saline quality of the tailing end of the Colorado river has forced expensive desalination plants to be necessary; even then the quality of overflow water to the Salton Sea is denatured.

Furthermore, the water quality of these rivers has recently been threatened by a variety of chemical and waste spills, events that make the national news for a few days, then is quickly forgotten, because the impacts are not taken into account.

The Obama program of “all of the above” in energy policy is a major disappointment. Essentially it means that the prevalent methods of exploitative polluting fuel recovery and development methods—from tar sands pipelines, to hydrofracking, to deep sea well drilling are okay. The impacts are neutralized through thousands of pages of token mitigations–when such measures are even necessary in expedited processing.

Once water bodies are polluted, the causes to the natural ecosystems are devastating, often irreversible. Our underground water sources are already often polluted with farm chemical residuals and residuals from solid waste landfills; we should be doing everything possible to protect our aquifers; yet in states like Texas, fracking fluid waste is often disposed of on open land.

Doesn’t it make sense that the Yellowstone River, 672-miles long, “the longest free-flowing river left in the United States and Alaska,” deserves to be left untampered with? It’s not that it’s upper reaches contain fine trout streams, or that it’s annual flow of 8.8 million acre-feet will help develop coal deposits in strip-mining operations.

Since it is part of the Yellowstone National Park region, with ideal habitats for fish and wildlife, with pristine waters for the High Plains Indians to use, why not try to leave something for posterity, since America is yet such a young nation.

The Deep Green Resistance movement views this as a good enough rationale on its own to defend, but it’s the first time a female Green Party Presidential Candidate is also brazenly painting the bull-dozers and taking a stand along with other native women against the Dakota Access Pipeline.

This is Part 1 of Third Party Leftist Presidential Options in 2016; read Part 2: http://www.asiangreennews.com/sep2016-elephant-in-the-room-is-drive-to-world-war-iii/

“Meet the Native Women at the Heart of the Dakota Access Pipeline Protests,” http://tinyurl.com/gvv5y8f