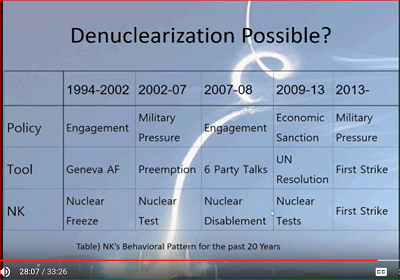 This article is based on part two of the ANSWER posted Webinar/Teach-in offered by the Task Force to Stop THAAD in February 2017. THAAD stands for Terminal High Altitude Area Defense System, a type of powerful radar-driven defense system developed by the United States. StopTHAAD is a coalition of U.S. based organizations formed to promote genuine peace-building. The goal is to encourage diplomacy, reduce militarization, and end the U.S.-South Korea war games.

Dr. Jae-Jung Suh, Professor of Politics and International Affairs explains what THAAD is in “THAAD & The Global Arms Race.” This Webinar/Teach-in is dated February 13, 2017. (That was two months prior to the actual THAAD installation on April 26, 2017 in Seongju City in the Republic of Korea (ROK)(aka South Korea)).

It is relevant for anyone interested in learning about the build-up of missile-defense systems (MDS) and how they are being used to support first-strike capability. While it appears to tip the balance of power on the side of the US-ROK, the take-away is that THAAD exacerbates the global arms race not just between the two Koreas (North Korea aka DPRK and South Korea aka ROK) but between Russia and U.S., and between China and the U.S. The only reasonable solution is dialogue leading to diplomacy that involves de-escalation and arms control.

Below is an image and weblink to the video uploaded by The Peace Report under “Challenging Missile Defense in the Age of Trump.” “The Fight to Stop U.S. THAAD Deployment in South Korea” Webinar/Teach-in also featured speaker Ray McGovern, former CIA intelligence officer and Veteran for Peace Board Member (in part one). The event was facilitated by Hye-Jung Park of the Philadelphia Committee for Peace and Justice in Asia. Dr. Suh’s lecture has three main points. They are that THAAD needs to be understood as part of an arms race. THAAD is adding to the global arms race, a race between the superpowers of U.S., Russia, and China. However there are alternatives which are better and feasible.

The U.S. began deploying nuclear arms in South Korea (ROK) in 1958, and kept hundreds of them there until 1991. Under the first President Bush (1989-1993) there were global arms reductions and many weapons were pulled out. Nevertheless enough remained so that North Korea (DPRK) created countermeasures such as amassing many conventional forces at the border and developing long-range artillaries.

The goal by the U.S.-ROK was asymmetric deterrence; however countermeasures by DPRK resulted in mutual deterrence. Suh depicts the 1960s-90s balance:

The second President Bush (2001-2008) launched the War on Terror and this included the Revolution in Military Affairs (RMA). U.S.-ROK added high-tech, preemptive strike weapons; however the DPRK countered this by announcing the development of nuclear weapons. No amount of sanctions imposed appears to deter the DPRK, which tested its first nuclear weapon in 2006. Suh depicts the 2000s balance:

Thus in the 2000s although there was mutual deterrence, a raised level of threat and danger was involved.

From Wikipedia on “Korean Conflict”:
At the start of the 21st century, it was estimated that the concentration of firepower in the area between Pyongyang [North Korea capital] and Seoul [South Korea capital] was greater than that in Central Europe during the first Cold War….According to the New York Times, in 2014, US President Barack Obama ordered the intensification of cyber and electronic warfare to disrupt North Korea’s missile testing.

Dr. Suh compares THAAD to the Anti-Ballistic Missiles (ABM) that were an early prototype of missile defense against the Soviet Union (and which led to an ICBM arms race). Suh depicts the balance in the 2010s:

Suh goes into detail regarding the variety of NK countermeasures and ongoing research, resulting in what is now roughly first-strike : first-strike balance.

According to Suh, however, THAAD has increased investment value over the extant ABM for several reasons. Ostensibly THAAD is being used to defend the ROK; however like Dr. Postol, Dr. Suh believes it will underperform in this role due to its inconvenient distance from Seoul (the capital of Korea) and the fact that DPRK’s offensive missiles are mostly low-flying shortrange missiles. Instead THAAD is better situated and designed to defend the region of NE Asia against NK missiles targeting Okinawa, ports in Japan, or Guam. THAAD may intercept NK missiles aimed at Okinawa, even Guam

From NWO Report on “The Coming War in China”:
Today more than 400 American military bases encircle China with missiles, bombers, warships and, above all, nuclear weapons. From Australia north through the Pacific to Japan, Korea and across Eurasia to Afghanistan and India, the bases form, says one US strategist, ‘the perfect noose.’

THAAD missile defense system uses radar to hone in on long-range high-flying missiles such as ICBMs which is important if the target is the U.S. continent. For instance, THAAD could detect and intercept, or relay for interception, satellites launched by North Korea carrying nuclear or EMP bombs ready to detonate on the U.S. continent. (High-intensity electromagnetic pulse (EMP) bombs are designed to wipe out the electrical grid and electronic devices all over the continent).

The important point, according to Suh, is that THAAD immediately and effectively intensifies the arms race on the Korean Peninsula. By extension, with the mutual defense agreements between US-South Korea and between North Korea-China, and cooperation between China-Russia, THAAD greatly adds to the global arms race.

From World Socialist Web Site:
Both China and Russia still view North Korea as a strategic buffer between their own borders and US-aligned South Korea, which hosts considerable American military forces. North Korea’s economic and political collapse would destabilize the region, including South Korea. For decades, Beijing has insisted that the tensions on the Peninsula which date back to the 1950-53 Korean War, can be resolved ultimately only by the withdrawal of the U.S. from East Asia.

Tensions in 2017 have actually increased for each month since President Trump has taken office. As troops and weaponry continue to amass along the DMZ, additional troops along the borders by China and by Russia, and naval exercises and fly-bys, provocations and skirmishes may spark a new Korean War, as happened in 1950.

Furthermore, according to Dr. Suh, China views THAAD as an invasive threat because such missile defense radars whether based in South Korea, Japan, or on AEGIS destroyers can be used to pinpoint the location of Chinese ICBMs. The global arms threat to Russia has greatly increased due to Obama-era construction of new missile defense systems (MDS) in Europe, and from new deployments in the Mediterranean, in Romania, as well as proposed installations in Turkey. Negative pressure has only increased DPRK countermeasures and rate of missile firing and testing as evidenced so far in 2017. In contrast, positive approaches such as proposing US-ROK arms control in return for North Korean nuclear weapons freeze is one good way to start on a different path, Dr. Suh emphasized. Suh depicts the possible balance as:

The 7.6 Statement that the North Korea government issued on July 6, 2016 in effect stated that “Denuclearization is the will of the KWP,” meaning everyone from the Korean Workers Party, from all the government officials and military officers and all the cabinet members to Presidents Kim Il-Sung and Kim Jong-Un…—Dr. J.J. Suh

Dr. Suh concluded that the 7.6 Statement would be an ideal place to start for negotiations right now between the U.S.-ROK and North Korea. This could include dismantling THAAD, halting aerial fly-bys, and scaling back naval/land exercises in exchange for DPRK nuclear weapons freeze and reducing countermeasures. The possibility merged together is:

Because THAAD appears not to be intended to do anything except hasten new and devastating wars on the Korean Peninsula, if President Trump would stop the military exercises, such as Key Resolve, and commence diplomatic talks, such as the Six-Party Talks, that would be ideal right now for helping true world peace.