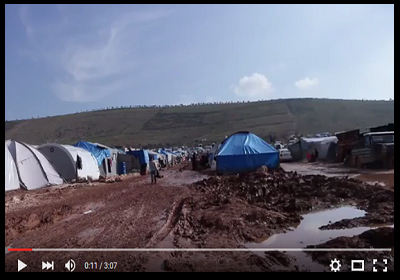 Part 2 continues with a focus question: Can Syria be the dawning of the truth that climate refugees will be regarded without mercy, as merely disposables, predators, or useless-eaters?

The desire to conduct regime change in Syria is bolstering weapons and defense industry spending and has contributed to record profits and trading in 2014.[1] According to Sharif Nashashibi, weapons purchases have skyrocketed in recent years:

Weapons sales to member states of the Gulf Cooperation Council (GCC) rose by 71 percent over the past five years, accounting for 54 percent of all imports the the Middle East.[2]

While the corporations based in US, Russia, UK, China, and France reap benefits from the arms race, civilians living within ISIS or Syrian boundaries suffer huge losses.

The latest bombing campaign by Russian, French, UK, US, and Dutch planes aim to push Syria past the state’s capacity to endure and repair remaining infrastructures. Indiscriminate bombardments by all fighting forces are ripping apart homes and laying waste to hospitals, schools, utilities, as well as farmlands throughout Syria.

According to Paulo Pinheiro chairman of the U.N. commission of inquiry, entire urban centres, in particular Homs, Aleppo and Damascus suburbs have been targeted since 2012. Whole city sections have been laid to ruins, there is mass civilian casualties and ongoing citizen displacement. His statement noted in particular:

Such conduct is in violation of international humanitarian law, and where attacks target civilians, amount to war crimes.[3]

Without access to water, with broken sewer systems and power grids, and restricted access to food by relief organizations, Syrian families are breaking up; children are taken in by relief agencies; older residents fearfully remain behind; while younger adults risk everything they have trying to migrate to Europe.[4][5]

By the end of 2015, up to 11 million Syrians will have been displaced internally, with at least at least 4 million refugees driven abroad. Devastating effects are being imposed by sieges under ISIS and rebel groups resulting in malnutrition and starvation.

Refugee movements are confused due to indiscriminate bombing. While barrel bombings are blamed on the Syrian Air Force, observers note they are equally likely to be foreign or ISIS aircraft originating from captured Tabqa military airbase in Raqqa Province.[6]

Present estimates of refugees in Turkey are between 1.6 to 2.2 million. Officially they are confined within U.N. Refugee or Guest camps set up that may provide housing, food, medical assistance, and education.

The reality of war is there is not much consistency. Jordan held an opening ceremony in 2014 for a new camp-city Al Azraq. At a cost of $60 million dollars, with prefabricated housing units, water systems, supermarkets, it is designed to host 130,000 refugees. This camp-city also includes huge tracts of land for adding on to.[7]

Syrian refugees escaping Camp Zaatari risk being rounded up by Jordanian soldiers and shipped back to Syria. Men inside these camps become restless. They are openly incited against Assad by recruiters who use the hospital and facilities. Daily there are intercom broadcasts pressuring men to join the Free Syrian Army.[8]

Many Syrian families just want a chance to resume a normal life outside the camps which are cramped and overcrowded. According to Doctors Without Borders (MSF) “Jordan is host to around 629,000 registered refugees, and a roughly equal number are estimated to be living in the country unregistered.”[9]

In countries like Lebanon, where the number of total refugees is well over 1.2 million, the situation has become increasingly destabilized from cross-border attacks on camps by the rebels. To make matters worse, the UN World Food Programme was forced to adjust the value of food vouchers to only half of what they were worth last year.

With only $13.50 per person per month, refugees are forced to ration their food and subsist on substandard diet.[10]

It is as if camp refugees are pushed back and forth between hard choices: risking their lives within Syria or adjusting to a hard life outside.

The situation for nearly 8 million internally displaced persons (IDPs) inside Syria are indeed dire now that Turkey has all but closed its borders. According to Human Rights Watch, border guards are beating back Syrians they catch crossing the border on smuggling routes.[11]

Under international human rights laws, Turkey is supposed to honor the principle of nonrefoulement, that is, not returning refugees to a place where they face real endangerment. The billions which Turkey has received from the E.U. for economic aid should also be used to assist and protect, not block asylum seekers.

Instead, Turkey has increased human suffering by allowing ISIS unfettered access to its borders, allowing NATO to launch air strikes from its bases, and even cutback on water deliveries to Syria along the Euphrates River.[12]

Is it any wonder that many Syrian refugees elect not to linger in Turkey, and those with money and education have often opted for other through routes, especially ones offering a chance to live independently or become autonomous?

Syrians need protection, not pushbacks to a war zone…Turkey, the EU, and the US should work closely together to ensure that Syrians can flee threats to their lives and find the protection they deserve.

According to Doctors Without Borders, the closing of Turkish borders means that urban civilians endure their situation or shelter-in-place with or without supporting infrastructure. IDPs are documented encamped at the margins of the desert trying to sew, repair, or erect new tents to protect themselves against harsh winds.

Documentary video shows Syrians making do in camps with no toilets, no drainage systems, and where each family at most receives 15 litres of water. During the winter, subject to cold and rain, refugees are at further risk because there are no medical facilities. Fires also occur from unsafe camp stoves and fuel types.[14]

Attacks against medical clinics and stations are increasing:

Since the beginning of the hostilities, medical facilities have been targeted, their personnel killed, abducted or forced to flee from the violence… and several months ago, some MSF centers were forced to close because of the risk of abduction.

Obviously, bombed up facilities are inadequate to address patients with a variety of needs such as insulin, treatment medications, diagnostic equipment, and prosthetic limbs. Even humanitarians, such as doctors, are told to give up hope.

Real exodus away from unsafe countries in the Middle East continues whether to neighboring countries, Africa, Europe, Asian countries, even the Americas. Those who depart may never return, since the costs in reconstructing their once happy secular lives are being born entirely by themselves.

Since a few months now, we’ve seen an increase of women, children, families coming to Europe, fleeing Syria and neighboring countries. One of the reasons for that is that families don’t have the means anymore to survive, to live in neighboring countries. In Lebanon, Jordan, or Turkey, humanitarian assistance has been decreasing in those countries because humanitarian actors working there don’t have the funds necessary to reply to all the needs of the refugees, so refugees have been forced to take their children out of school; they are not able to pay for medical fees; even food assistance had to be decreased, because actors don’t have the money to pay for it.

Meanwhile, the charade of peace talks and media disinformation continues. Without investigating the validity of reports, many mainstream news agencies have repeated verbatim reports of atrocities prepared by the Syrian Network for Human Rights (aka. Syrian Observatory for Human Rights). The State Department revises its position post-defacto with each proven US abrogation of international law. The White House poses as peacemaker but continues in lockstep with the Pentagon. The EU cooperates with NATO in their outline for a post-Assad government. Moscow, too, may be following a road map of proxy World War with (faulty) aerial bombing.

The Syrian-American Forum recently posted in the New York Times[16]:

Breeding militants in Syria is the main reason this conflict has turned into a vicious war. The first and foremost priority for the international community should be a realization that the political and diplomatic solution starts with a full cessation of support to these terrorist militants.

To date, whether Climate Action or human needs, NATO and its allies lack a solid action plan for addressing the needs of Syrian refugees other than increasing UN Fundraising for more handouts. A reasonable resettlement plan would consider the importance of cooperation with the Syrian government in rooting out ISIS. Another reasonable plan would be to cut back all funding for the GCC and NATO, since there are already enough weapons and armaments to blow up Earth about 20 times.

The motives of the globalists are not reasonable, because they do not actually ever intend to factor in the externalities of war or the consequences of their actions, so long as they achieve desirable monetary targets. They want realistic public dialogue to be overtaken with tribalism.

Can Syria be the dawning of the truth that climate refugees will be regarded without mercy, as merely disposables, predators, or useless-eaters?

Fomenting war and supporting terrorists for the covert purpose of securing foreign resources and energy supplies is the antithesis of conserving fossil fuel, according to conservationists. If the mass migration from Syria is any indication of climate change, then the chilly response is just a forecast of things to come.

According to socialists, the prevalent capitalist mindset trivializes human life, peasant autonomy, and national sovereignty in favor of the Western stock markets. According to peace advocates, the military industrial complex has completely trivialized the number of refugees and loss of human or ecological life support as mere externalities. Worse, much of the destruction, pollution, and moral degradation are supported by national tax-payers in first nations.

From the perspective of Green Party advocates, there are no gains in war except artificial ones that benefit those at the top. What needs to be done, according to World Beyond War, is to allow refugees the opportunity to experience full resettlement in decent habitable environments. That includes access to counseling, reparations, and most of all, leaving the Syrian government alone.

(Part 1 probes the Syrian conflict from a peace-activist pro-social-environmental stance. Since an assault on any part of humanity makes it easier to target the rest, it’s important to understand why NATO/GCC militarization is the antithesis of what is desperately needed to address climate change, dwindling resources, and unemployment.)

[8] “Inside The Syrian Refugee Camp The Size Of A Small City,” Journeyman Pictures, https://www.youtube.com/watch?v=Nvxxk2nvU14

[14] “A Look at Syrian Refugees, March 2015” Doctors Without Borders/MSF-USA, https://www.youtube.com/watch?v=uCqcJDYijKQ