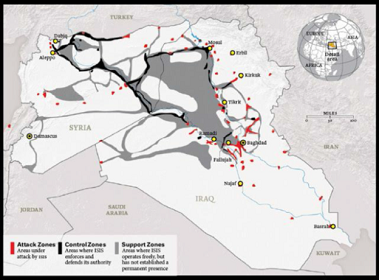 Syrians fleeing war conditions face horrific circumstances. Deprived of livelihood, home, business, and even funds, many are desperately seeking a new life. Since before the war, over ten million have fled to safer havens including in neighboring countries or in Europe.

For globalists, military strategists, neighboring sheikhdoms, including Israel, the impending collapse of Syria is the culmination of years in planning, even before the start of the second war with Iraq in 2003.[1]

What globalists envisage as part of their cold, wet dream is a vacant land bridge between the Persian Gulf to East Mediterranean. If Syria transforms into a NATO client-state, very soon Iran would be the next to fall in line.[2]

With regime change and subordination to the Gulf Cooperation Council (GCC), Syria’s assets will be realigned with the structural adjustment expectations of the World Bank. The West lusts after the land bridge for development by the hegemony in the form of seaports, secure oil transport pipes, exclusive water domains, and best of all, control over Syria’s massive natural oil and gas reserves both onshore and offshore.[3]

A land emptied of small peasant farmers and town villages is preferable: no one remaining will question the establishment of reforms favorable for corporate agribusiness, foreign realtors, and big banks.

The millions of fleeing, desperate, starving Syrians are manipulated by NATO globalists for political fodder to prove the country is no longer governable. All sides from human traffickers to foreign players to terrorists reveal a catastrophic choice. At the brink of climate chaos, globalists view sovereignty as secondary to acquiring natural resources: social disintegration and victims needs are overlooked. Western media downplays the covert killing, starvation, bombing, and destruction by ISIS.

Syria is the very antithesis of what climate change scientists and advocates feel ought to be taking place to heal a largely democratic, secular country withering from extended drought beginning in 2006.

Many climate scientists acknowledge that climate change is already affecting regions in the Middle East, including Syria. For example, record heat waves in 2015 forced the government of Iraq to declare a four-day public holiday. Syria had endured a prolonged drought since 2006 when it’s civil war broke out in 2011.[4]

Destabilization from terrorist groups is such that millions of rural Syrians are relocated to urban areas, then forced to flee the country as those cities are bombed. According to Nazemroaya, the Pentagon developed war plans for Lebanon and Syria following recommendation by Richard Perle and the Study Group on a New Israeli Strategy Toward 2000 in the late 1990s.[5]

The plan is to balkanize Iraq, encircle Syria, and prepare for a pretext for sectarian conflict to conduct regime change. Pentagon funds for regime change began in 2003 after the U.S. Congress passed the Syria Accountability and Lebanese Sovereignty Restoration Act.[6] Since, then, untold billions of dollars continue to be spent by the CIA, NATO extension, and the U.S. government in funding anti-Assad terrorist groups based in Saudi Arabia, Jordan, Egypt, and NATO-member Turkey with its extensive supply lines from NATO-shared facilities.[7]

While climate scientists such as Peter Gleick allude to the fact that a variety of factors contribute to the inception of conflicts “drought, agricultural failure, water shortages, and water mismanagement, have played an important role in contributing to the deterioration of social structures and spurring violence (Femia and Werrell 2013; FAO 2012; Mhanna 2013).”[8]

The globalists anticipated the perfect storm. They withheld assistance so “the regime” could be blamed for outdated water irrigation methods and systems.[9] Terrorist groups such as Al Qaeda, Al Nusra, Muslim Brotherhood, and others were armed by the CIA so Turks or ISIS could slaughter villagers and secure border towns.[10]

On ideation of conquest for resources: water, oil, natural gas, and lands to be divvied up between the major instigators and GCC, Cem Ertür writes[11]:

All the available evidence indicates that U.S., U.K., Israel, Turkey, France and Saudi Arabia meticulously planned the genocidal covert war on Syria for years before actually launching it in 2011. Right from the beginning, Turkey has been at the epicenter of this war in every possible respect.

The recent discovery of oil in the Golan Heights provided additional impetus[12]:

Interestingly enough, on October 8, [2013] Yuval Bartov, chief geologist from Genie Energy’s Israeli subsidiary, Afek Oil & Gas, told Israel’s Channel 2 TV that his company had found a major oil reservoir on the Golan Heights: “We’ve found an oil stratum 350 meters thick in the southern Golan Heights. On average worldwide, strata are 20 to 30 meters thick, and this is 10 times as large as that, so we are talking about significant quantities.”

The primary goal of the early Zionist leadership was to control and secure the region’s waters. At the Paris Peace Conference of 1919, Chaim Weizmann declared that ‘it was of vital importance not only to secure all water resources feeding the country, but to control them at the sources – and the development of these waters became the primary aim of the Yishuv as a whole[iii]. This policy remained in place. As Israel ’s third Prime Minister Levi Eshkol put it, water was “the blood flowing through the arteries of the nation”.

Securing Syria would allow Israel to control its rivers and streams. Thus NATO, the GCC, and Israel are implicated in “working closely with Syrian opposition terrorists, including Al Qaeda’s Al Nusra Front and IS in the Golan Heights.”[14]