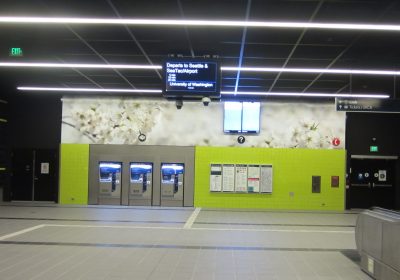 According to Light Rail Now (LRN) the consensus of building and home owners for the University extension portion of Phase 2 of Sound Transit (from Sea-Tac Airport to University of Washington) supported underground rail because Capitol Hill residents wanted to preserve the historic character of their neighborhoods. Begun in January 2011, it drove up construction costs, in addition to environmental mitigation associated with tunneling under Portage Bay. The complicated 3.2 miles extension—at places over 300 feet deep—stretched the timeline to March 2016.

A ballot measure facing Seattle voters this fall is whether or not to fund Sound Transit 3 (ST3), which will increase spending on LR by 50 billion dollars over the next 25 years, as plans are to extend LLR throughout the region. The Transportation Choices Coalition provides a showcase for benefits as such as economic stimulation, transportation choice, reliability, affordability, encouraging healthy living, reducing car driving and green house gases.

However critics accuse Sound Transit of continually asking for huge sums of money first, then worrying about how to spend it. In 2008, ST2 already doubled transit funding to $17.8 billion expenditure over 15 years in the form of a 5-10% rise in general sales tax. Using graphs, Sound Transit Revealed illustrates how STLLR wastes taxpayer money, generates low ridership, experiences cost overruns and project overlap in ways that are “bizarrely expensive.”

With only 3.2 miles of the LLRT extension to Lynnwood complete, overall dates seem to be routinely pushed back. Nevertheless, it’s worth examining Transportation Choices Coalition‘s perspective on healthy living and reducing greenhouse gases, because from a global perspective, climate change is affecting many parts of the world and will likely accelerate over this century.

Their urban mobility congestion data for the Seattle Metro region is particularly telling. The reporter’s data analysis is facilitated after generating charts as shown in Figure 1 and Figure 2. Ultimately it helped contextualize the extent of carbon pollution occurring, and also supports the argument that a dramatic growth in mass transit ridership will lessen congestion carbon loads.

The graphs below were developed using urban mobility congestion data based on years from 1982 to 2014, during which the population in the Seattle area grew from 1.86 million people to 3.33 million people—about an 80% increase from 1982. Growing at a rate of nearly 45,000 people per year, there may be an additional 2 million people by year 2060. Dramatic growth in traffic congestion is symptomatic of insufficient highway capacity for accommodating all the extra vehicles on the road due to population growth and additional commercial non-commuter traffic.

Note the TTI study is limited to peak commuters defined as number of travelers who begin a trip during the morning or evening peak travel periods (6 to 10 a.m. and 3 to 7 p.m.). Also, commuters are private vehicle users unless specifically noted.

Obviously over a period of 33 years, traffic also increased significantly around the region, as other nearby towns and cities experienced population increases. Many drivers experienced regular slow downs from accidents at familiar bottlenecks outside of peak hours.

Figure 1 indicates that while excess fuel consumption increased dramatically due to traffic congestion, the congestion costs remained relatively flat. Congestion costs are defined as value of travel delay for 2014 (estimated at $17.67 per hour of person travel and $94.04 per hour of truck time) and excess fuel consumption estimated using state average cost per gallon.

This really underscores the fact that over this period, wage growth remained relatively stagnant while fuel prices remained artificially low. Equally reflected is the notion that there was little incentive to conserve, although many more fuel efficient cars are being driven.

Extrapolating from the data, one can apply the conservative standard carbon (dioxide) factor to convert the excess fuel into an estimate of the total carbon generated in pounds. Thus, from the standpoint of global air pollution, bearing in mind that carbon collects in the upper atmosphere and takes a long time to break down, public transit, particularly those relatively freed from fossil fuel dependence such as light rail transit systems, make sense.

As a nation, we have neglected our public transportation infrastructure for decades and many public transit systems are playing catch up. The time has come for strong decisive action. We must address the industry’s tremendous maintenance backlog. There is a need to invest $43 billion a year as opposed to the $17 billion we currently receive to expand, improve and upkeep our public transit infrastructure.

More Sound Transit must be delivered on time and under budget

For $50 billion dollars, Sound Transit 3 promises a lot, especially while Sound Transit 2 is still underway. The expense thus far is cited in Wikipedia:

Seattle’s new light rail system is by far the most expensive in the US, at $179 million per mile, since it includes extensive tunneling in poor soil conditions, elevated sections, and stations as deep as 180 feet (55 m) below ground level.

Moreover the overall numbers in ridership lag far behind other major metropolitan regions. DC Metro, which opened in 1976, has a daily ridership of 836,000 people with over 1 million during special events; the New York City Subway system records 5.9 million rides per weekday; other top rail transit systems include Chicago with over 770,000 rides per weekday; Bay Area Rapid Transit (BART) experiences over 450,000 weekday ridership.

Obviously as Sound Transit Revealed points out, the ridership should be justified in terms of actual light rail use excluding express buses, some of which are targeted replacements of previous King County Metro bus lines (such as former Express Bus #194). Whether it is cancelling, merging, or expanding bus lines, the link between Sound LRT and local area buses continues to be a vexing issue, which is something Seattleites at Seattle Transit Blog love to discuss.

Bruce Nourish in “Metro and the Future of Seattle Transit“:

What I’m suggesting here is that more people should care more about Metro, but it should be a care that cuts two ways. I want to see Metro amply and sustainably funded; expanding, not contracting; but my great fear is that I will advocate and vote for revenue for Metro, only to have the agency leadership decide that, well, nobody likes open houses or hearings full of angry people, so there just won’t be any major restructure proposals for a year or ten. Frustrating and vaguely Sisyphean as it seems, I think everyone who cares about Seattle evolving towards a future as a car-optional city should care about Metro in a similar way.

One thing is for certain, whether it takes 22 years or not for the Seattle LLRT to arrive in Ballard, growth in LRT ridership tends to far outstrip initial estimates once the rail is put into place. However whether or not there will be enough ridership to effect a return on investment, Sound Transit 3 will exact a heavy price tag.