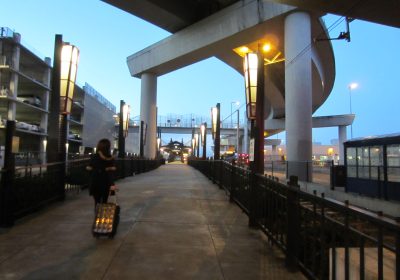 Seattle, WA–In the 1980s, riding public buses as a college student, there were many times when I wondered why Seattle, so famous for its 1962 World Fair and Monorail, could be dragging its feet with regard to improving its infamously slow commutes. Beginning at 3pm, heading north towards Everett from Downtown on I-5, one experienced traffic congestion worth making the 30 mile commute up to an hour and a half. Driving south along I-5, the congestion was equally awful, whether heading towards the Mercer Island floating bridge or towards Southcenter.

It was truly a mess, and riding the bus was so slow sometimes, one could easily imagine rationalizing the muscle cramps for bike riders circling up over Capitol Hill or weaving underneath Lake Union. Even where the ocean air is famously filled with nutritious moisture, the pollution sent up by all those vehicles made you feel dizzy if you left the window down. The traffic was so abominable, no wonder my civil engineering classmates craved to be hired by the Washington State Department of Transportation.

It seemed like a long wait compared with Portland Light Rail which was completed in 1986. However little did the public realize that complex proposals—a medley of above grade, subgrade, and deep tunnel transit options were being intricately worked out. All of this relied on massive amounts of data, analysis, deductions, and public input, especially for new interurban railway stations which serve to also revitalize blighted intercity neighborhoods.

A generation from the time I observed surveys and traffic studies conducted around Husky Stadium, Sound Transit (ST) finally arrived on campus. The Golden Ticket Ride was on March 19, 2016. About a month later, on a trip up north, AGN experienced a fabulous ride. LLRT challenges worth the hills

Since I am not a transportation engineer, I would be lying if I said I understood much of the difficulties surrounding the planning, development, design, and construction of the ambitious route ultimately chosen from Sea-Tac Airport across the Bay (approx. 17 miles). From what I could observe, the planning and development would have to have taken at least a decade, due to complex decisions regarding right-of-way, above or below grade design, vertical transitions and horizontal alignment. At least a decade was puttered away in such things as land acquisition, clearing, soils analysis, multiple preliminary studies, evaluations and re-evaluations, environmental impact statements, meetings, negotiations, redesigns, cost proposals, and legislative processes.

Factored into all this, assigning a factor of two, would be natural challenges, anything from geographic location, to geology, to weather, seismology, surface and subsurface drainage, and limited construction seasons. For instance, simultaneous to digging underneath Capitol Hill and on through to Portage Bay, deep vertical access shafts had to be constructed for stations. In addition, with the Alaskan Way Viaduct being replaced by a new highway tunnel within the constricted downtown area west of I-5, the feeling that the ground was moving beneath you was not entirely imaginary. Mechanical failures and mudslides also slowed things down. While the Central Link Light Rail Transit (LLRT)’s initial opening in 2009 impact was low-key, construction improvements in the Downtown Seattle Transit Tunnel (DSTT) and area wide transit bus hubs were ongoing. The Tunnel was closed periodically for rail improvements.  Sound Transit (ST) buses had to distinguish themselves from King County Metro Bus Rapid Transit, and do so in ways which connected and increased ridership with major link stations.

In contrast, King County Bus Rapid Transit relies on traditional ridership. Feedbacks for improvements whether it is coordinating service times, adding new stops, or route relocations favor ST Express buses since it is nurturing a new, growing ridership base; one that has traditionally operated out of suburban areas and been mostly car dependent, it is more responsive to rider requests. The data has been dynamic expansion as subscribers to the Ride the Wave Transit Guide notice new rider alerts biannually.

By 2012–three years after Central Link Light Rail Transit (CLLRT) opened–tourists may even  feel overwhelmed with the sudden profusion in transportation options as Sea-Tac and King Street transformed into multi/intermodal transportation hubs. In the short space of a few years, a new multistory car rental facility was erected at Sea-Tac Airport with door-to-door shuttles and commercial parking growth. Viewing the rails installed at the Downtown Seattle Transit Tunnel (DSTT) even subtracted from the experience in ridership. A new public transit rider pondered whether they should ride the bus, hybrid bus, electric trolley, or await the future Light Rail Transit (LRT). Rowdy behavior and muggings at the DSTT and other ST/Metro facilities, however, are problematic for younger students. Many confuse Sounder with Sound Transit, since both share the same rails, and they sound so much alike and use the same Orca Card system.

Nevertheless, with major metro regions also in the process of expanding their multi/intermodal hubs–St. Louis, Milwaukee, Indianapolis, San Jose, for instance–burgeoning urban population over the next century, Sound LRT comes none too soon. Climate activists realize that an urban village culture can reduce habitual dependency on cars, but weaning from the habit takes time.