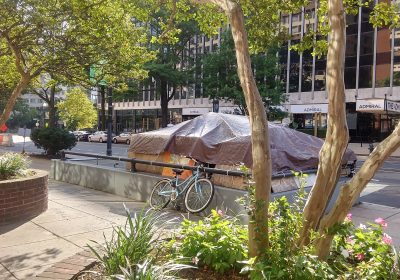 Here is a crosspost from YourHomelessBlog.blogspot.com

Recently I ran into a person I used to see at Miriam’s Kitchen, one of the poets of our group. There were several white males in our group that met every Wednesday morning (pre-Covid). One was a former professor, up in years, who due to taking care of his wife, had used up his savings. Another, a very dapper fellow, preferred roughing it rather than submitting to living in shelters. This one was not actually a regular of our group—rather, I would see him at the GW Hospital Cafetaria, him and his friend. A long time ago, at least six years back, when things were better, they confided to me that they actually lived on Roosevelt Island. I don’t know if he still lives there, but I could tell that things had not gotten much better for him.

Recently, a lovely person, an elderly African-American woman in our house was sent home to Our Home in Heaven, at least we hope so. This woman, she was at least 75, possibly over eighty. It’s hard to tell with African American women sometimes because they can age well—but her hair was quite grey. I won’t go into the details of the elderly abuse problem in this house. There is so much injustice in the world today, and only places like Poor News Network is holding seminars on how to fight eviction notices.

Here are ways slumlords narcissistically enrich themselves at others expense, including their safety, dignity, and well-being. Note that we are working off of our reserves today, so if links are missing, it’s because it’s been so traumatizing.

You can’t force people to care. How much does Trump care when the rules are not bent for his own profit? That is the example set, and when people are forced out, the prevailing “Who Cares” attitude ensures that passerbys will only mock them…
Picture how this works with the Peter Principle or principle of inefficiency: Residents love to act out and break things and waste supplies. Instead of counseling residents on these matters, the Program Administrator specializes in creating and administering work orders: the more maintenance requests there are to manage, the better. Therefore there is a preference to let things go unfixed, to delay or postpone, and to create more  paperwork by keeping track of new purchase orders.
“The family will be spared caring for this older disabled person, if ever they did!”
“The government doesn’t have to enact so many austerity measures or cutbacks on Social Security. We will help the government save money!”
“Euthanasia is the trend. Why must so many Americans live so long when they are no longer active in the production line? My line of thinking goes along with all those great industrialists! Save those pensions and health insurance for SpaceX.”
“Who cares if the COVID-19 vaccine is inappropriate or not? I am following orders and they are my laboratory guinea pigs!”

Even at the Sports Club near Georgetown, some gals were remarking in my hearing that with so many clubs around, older adults should just go exercise elsewhere. The implication was that we might be a ‘threat to their safety.’ Hmmph! And who is paying their club dues but their Daddy and Mommy, while we pay our own dues? In fact, a nearby yoga club now has more middle-aged women enrolling because they are welcomed and not just by their cohorts.
Doctor Ramani advises in “Healing when there is no justice”: Don’t wait for justice to come around. In real life, often times it won’t. Of course you can take steps to ensure it can take place. In the age of COVID-19, sure the senior centers and community centers are closed, but you do have their phone numbers and contact information! I have the D.C. Department of Aging and Community Living bookmarked! I have their phone number and email addresses. (https://dacl.dc.gov/services)
Has it occurred to you that your concerns about the stove and whether the broken parts are fixed might be cured by PRAYER? YES, PRAYER. If we all prayed more, it might improve our temper and our patience, and then we might not be twisting the stove knob off, or kicking the wall, or cutting up the dish sponge…These things might just last longer if we cared more, treated our surroundings with gratitude…
I am not the only person who can feel the change, the passing of an age as it were, with the passing of so many elderly locked away, left to die, in nursing homes. They had wisdom, a free and useful product indeed, to share with society. But just like the recordbreaking wildfires in California, most people are too glued to their TV or smartphones to notice the winds of loss in the air. Even their pets can sense it, but the owners cannot, because it was not something told to them in the mainstream news.
We are not just a ship of fools; we refuse to acknowledge that a lifetime of wisdom does not happen overnight. When I study the buddhist tracts, I realize that the myriad of terminology, teaching methods, stories, songs, and art are all the work of centuries of monks and nuns who persisted in spite of adversity. They are like the scientists whose body of work we ignore in favor of the words of an ignoramus for President. (It’s called the Dunning-Kruger effect of bias and illusory superiority.)
If there is any takeaway, I am dealing with the sorrow as much as I can on my own. There’s precious little comfort here. So many of the guests and visitors are taken in by the superficial charms and hospitality of the moment…. 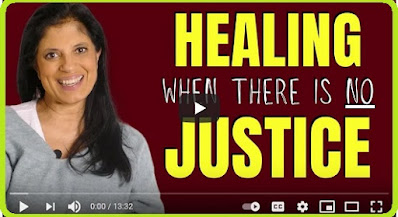 Doctor Ramani in “How to heal from narcissistic relationship when there is no justice” https://www.youtube.com/watch?v=B6LzDnJ6ziM –

Watching Dr. Ramani, and Surviving Narcissism (Dr. Les Carter) is not a sure-safe method to develop tactics against abusive people. Like Trump, they often will claim they are victims, and that perhaps you are the narcissist. All kinds of headgames…