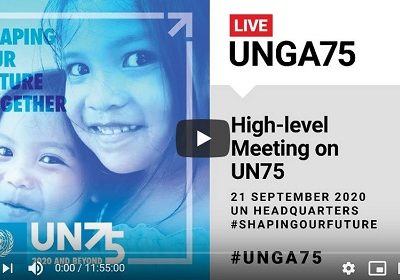 The thematic celebration of United Nations Global Anniversary 75 years brought many perspectives to light for “Shaping Our Future Together.” It was the first virtual conference of its kind, a summit of recorded statements by heads of states, ministers, and diplomats. All 193 members were allowed to deliver speeches of up to 10 minutes. The official celebration was held between September 21 – September 30th, and includes music, youth panel, poetry, and simultaneous summits on biodiversity, sustainable development, and finance. The panels and messages are a sobering reminder of the many people around the world grateful to the United Nations, including its ongoing aid missions, researchers, peacekeepers, and volunteers.

The bulk of the nations’ speeches reflected a regurgitation of thematic elements but from their national vision of the United Nations of the future. Even while uncertain that the United Nations will hold together for another 75 years, many expressed optimism because it is the “single most important international global institution holding the world’s nations together, and allowing each sovereign state to be heard, large or small.” Most nations appear to agree that today’s vital topics are multilateralism, COVID19, climate change, and sustainable development. “Building back better” is a key theme tying all the concerns together on a hot flat crowded planet with ever diminishing resources due to human greed.

Foremost amongst the issues are peace and security. There are many different perspectives of what that consists of beyond the Janus-faced coin of stability versus bloodshed. For the United Nations, founded at the end of World War II, in September 1945 in San Francisco, California, its foremost organ in international negotiations remains the Security Council. Today, ironically, many nations call for its reform with Japan’s minister leading the charge, clamoring for a permanent seat, while most of Africa declares that they need more representation.

Nations such as Cuba, Nicaragua, Venezuela, Iran, and Russia argue that economic sanctions and blockades constitute deadly warfare (and this is apt with regard to North Korea). Nations taking in war refugees such as Jordan, Lebanon, Saudi Arabia, Kuwait, Portugal, and Germany deplore the conditions for Palestinians; others defend the right for the Syrian people to return to their homeland. Indeed whether in 21st century “permawar” or fresh emerging conflicts in Armenia/Azerbajian, the United Nations too often appears less than effectual, even complicit in rationalizing extensions, annexations, and one-sided negotiations. At times the process is painfully slow, while the violent conflict drags on, the bombing continues, and innocent people suffer for the rest of their lives.

On defining what further steps can be taken to implement a global ceasefire:

“These are wars that nobody can win; and that everybody in the end will lose; and so I believe this is the moment of a new push; a very strong push…to make ceasefire a reality; and at the same time use that reality as an opening for political negotiations.”

All well and good, but not considering that the United Nations via the United States is defending the Peace to Prosperity plan as a new path forward for Israel-Palestine without considering the crucial inclusion of the State of Palestine in co-authorship. However twice during the press conference, the UNSG stated his conviction that there is a way forward.

“It is very important not to give up on the peace process in the Middle East. I believe it is absolutely essential that Israel and Palestine go back to direct negotiations and I will do everything I can to make sure that we find the format, quartet or similar format, in which a number of countries can be helpful in making sure the peace process can move forward.” —UN Secretary General António Guterres (September 16, 2020) Annual Press Conference

On a more hopeful note, several years after the passage of The Nuclear Weapon Ban Treaty of 2017, a majority of the nations are more boldly calling for nuclear disarmament. While syndicated news outlets, especially in the United States, have avoided mentioning this Treaty, it was approved by a majority of 122 nations on July 7, 2017, and has reached the required number of signatures to enter into force in January 2021.

Sponsored by leading civil society disarmament organizations such as the International Campaign to Abolish Nuclear Weapons (ICAN), Reaching Critical Will, Women’s International League for Peace and Freedom (WILPF), the International Committee of the Red Cross (ICRC) and Red Crescent, testimonies from survivors, a host of world leaders and luminaries, this Treaty adds nuclear weapons to the classes of banned weapons which currently include: land mines, cluster bombs, chemical weapons, and biological weapons. It is ICAN leadership, including being awarded the Nobel Peace Prize in 2017, which has empowered additional nations, such as Kazakhstan, Gambia, Nepal, and Ecuador to pay tribute to their own denuclearization efforts. Smaller island nations, especially those used as World War II nuclear test sites and represented by the Pacific Island nations (Philippines, Indonesia, New Guinea, Palau, Micronesia, Solomon, Nauru, Marshall, Australia, New Zealand, Tuvali, Fiji, Tonga, Samoa) still suffer from the scars, and question the need for such weaponry, and the expense of maintaining such stockpiles, when climate change and global sea-level rise are causing new waves of concern in terms of loss of land, wildfires, habitat loss, saltwater intrusion, loss in coral, and a host of new security threats.

“Island states have long emphasized our profound vulnerability to a changing climate…One disaster, one typhoon, or one pandemic, can wipe out progress that we have painstakingly made, and take us back years in our development efforts.” —Tommy Remengesau, Jr., President of Palau

“Those that have caused this climate crisis need to step up and lead by taking more ambitious and mitigating actions, and providing the means of implementation. It is still within our reach to leave a habitable planet for future generations.”—David Panuelo, President, Federated States of Micronesia

“As a low-lying atoll nation with no higher ground for retreat, climate change possesses severe threats not just towards our future development but towards our core security, human rights, and our way of life. Climate change is a global issue and requires a global solution. Despite my country’s best efforts to demonstrate leadership on our climate action, we cannot do it alone. All countries, in particular, large emitters must come forward to keep their promises made in the Paris Agreement.”—H.E. David Kabua, President, Marshall Islands

The world’s “roof is on fire” and the smaller nations which do not have the luxury to deny the impacts argue against paying the externalized costs from transnational corporations or from countries which have wreaked havoc on the planet. Their economic losses include foreign piracy and destruction from unfair competition such as mega-trawlers parked in off-shore waters, foreign tankers that leave devastating oil spills, and U.S. air craft carriers polluting the ocean with military wastes. Island nations like Maldives, Barbados, Tuvali, Costa Rica, and St. Vincent & the Grenadines are worried about loss of biodiversity, food security, trade, tourism, and health care, all of which have been impacted by the pandemic. They speak of an urgent need for multi-faceted and effective multilateralism, including open dialogue about rising migrations, a panoply of financial access, and creative partnerships, because otherwise, they will fall further behind and be unable to meet any of the sustainable development goals in time for 2030.

“Promote United Nations so we can enjoy peace, security, and development for all states; and let no state use its military, economic, or political power to deny any other its rightful place at the table at the United Nations in equality and dignity.”—The honorable Dr. Ralph Gonsalves, Prime Minister, Saint Vincent & the Grenadines

“I believe that if we fail to act now, history will remember that we had all the resources to act now but that we chose to remain idle. Solutions exist, and if countries commit to act, honor pledges to cut emissions, and mobilize funding for sustainable development, irreparable damage can be averted. The COVID19 pandemic has reminded us in the most powerful way that we are closely interconnected and only as strong as our weakest state.”—Robert Abela, Prime Minister, Malta

“No new blueprint is needed; we already have the SDGs (the 2030 Agenda), The Paris Agreement, and the Universal Declaration of Human Rights. It is the time to deepen their implementation, and to create real change. Partnerships are key. And coalitions going beyond states between private sector, civil society, and non-state actors with the capacity to deliver the financing, innovation, and technology required to make change.”—Mette Frederiksen, Prime Minister, Denmark

Whether or not powerful first nations will heed any of the smaller nations remains to be seen. Presently the United States, for instance, has denied any evidence of climate change and global warming. Fringe groups such as the “flat-earthers” claim the Earth is actually flat, and the moon-landing is faked. The nation appears to be at war with itself, in a process, as pundits have observed of “finding differences” and “using differences as the justification for hatred or intolerance.” Identity politics is front and center at a time when record numbers of Americans are unemployed. The direction of the Congress is based upon the health of its financial elite and the stock market; which may explain why they are in no hurry to pass another CARES package anytime soon: the bail out has already more than benefited the super-wealthy, and their needs can wait until next year. Furthermore, the race by the super-wealthy toward privatization and public sector restructuring has been given impetus by the billionaire class. Not only are they hoping to snap up school districts and postal service, but also reinvest their profits in artificial intelligence, and militarizing space. Unfortunately, the decades-old peace organization Space for Peace must now contend with Space for War.

Due to different daytime hours around the world, and stringent safety and health measures in place in New York City due to COVID19, actual live simulcasts were limited, and events continued in October. For instance, the United Nations (UNGA75) 3rd plenary high-level meeting held two sessions on September 21, 2020 with 124 nations commenting on the draft resolution. However the Observance Ceremony was postponed until October 26, 2020, with the remaining countries offering comments during the afternoon.

Approximately 158 nations are included in the taped #UNGA75 live telecast, while the remaining 35 nations met in the State Room where broadcasting capabilities were limited. Nevertheless it is evident that officially themed or not, nations are open about their vision for a better world extending far beyond the three pillars of peace and security, human rights, and economic development. Moreover, lest they were underheard during the 3rd Plenary meeting on September 21, 2020, many nations also restated their vision and concerns during the General Debate which took place between September 22 – September 29, 2020.

Report prepared by Christine Wong, blogger at Asian-American Forum since 2009, and citizen-journalist for Asian Green News. (Full profile at muckrack.com/christine-kroll)