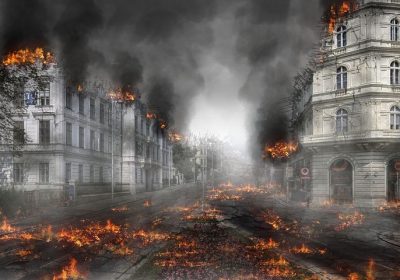 The Schiller Institute, founded by Helga Zepp-LaRouche and based in Germany, has instituted a month-long campaign against the war in Ukraine. Every day recently there are news updates by either Senator Richard Black or media spokesperson Harley Schlanger. The Schlanger reports are particularly helpful as they provide up-to-date information on what is taking place in Europe and are presented in a laconic manner. Both do take the viewpoint that unless negotiations happen soon, there will be dire consequences.

For instance, recently there has been concern over Ukraine’s President Zelensky’s connection to terrorists who plan to manufacture a “dirty-bomb” laced with thermonuclear components in a false-flag operation that would implicate Russia. Already there has been concern over secret plans by his commandos to deliberately attack Ukraine’s own nuclear plants in order to draw the world’s attention against Russia.

The Russians do not want to use any nuclear bomb in the West, as Foreign Minister Sergey Lavrov has made clear; however when there are no negotiations taking place, the default in war is more war. As soldiers become hardened, they also become more prone to committing wrongful violence and abuse; that frequently happens on both sides.

Then there is the issue of the Nordstream pipelines and who did the dirty deed on 26 September 2022. Various pundits and news personalities believe that it is likely the United States; a recent investigation by Sweden made available to the German authorities located strong circumstantial evidence on who is the culprit. They found an unmanned undersea drone which had one of its wires severed, which saved that particular Nordstream pipe section. However, the German authorities refuse to disclose the manufacturer of the drone (a key indicator of which country would be involved) for fear of “over-exciting the public.”

This kind of lack of disclosure, state secrecy, and supra-parental attitude is exactly why so many Europeans are beginning to question who the European Union actually stands for, what purpose it serves, or why all the other European nations must comply with its diktats which reduce national governments’ sovereignity and responsibility to the public.

Schiller Institute’s longer seminars this month included “Stop the War Before It is Too Late“, a two-part series held on October 6-7, 2022. The webinar from October 7 was especially meaningful as the Institute convened a panel with politicians and experts from the global south. There were panelists from Mexico, Columbia, Trinidad & Tobago, and other countries providing their perspective on how it feels to be caught in the middle of this war with interruptions of the supply chain, with rising gas prices, and inflationary rise in consumer goods.

Mexico’s panelists promote the need for an immediate ceasefire and commencement of negotiations involving intermediary parties, such as the Pope, to help provide a perspective on fighting a moral and spiritual war besides just using the empty slogans of “freedom and democracy.” On this matter, China has also asserted time and again this year that each country should be allowed to pursue their own style of democracy. On a recent broadcast at CGTN “What is democracy and how to evaluate it?” they again reiterated that the CPC has evolved to become the world’s largest “socialist democracy with Chinese characteristics.”

Helga Zepp-LaRouche, Founder and president of the Schiller Institute told the media:

“If you compare ancient democracy in Greece, this was a direct democracy where the majority of the people, naturally only men—no women and no slaves—but the majority of the people had direct participation, they could speak, they could deliberate on policies, and then make a decision that would be carried out. There were no political parties, no parliament, no professional politicians, and that has changed a lot. You look at the democracy today, the liberal democracy, well, you have the lobbying of interest groups, which are represented by different parties. And that goes, many times, against the interest of the nation—this was even mentioned by George Washington in his farewell address where he warned against the existence of parties because he said that this could lead to a situation where the interest of the nation is being forgotten. And you know so today, you have a mixture of these different interest groups which represent the majority. And who are these interest groups? Well it’s the financial sector, it’s the military industrial complex, and many times they are not representing the interests of the people, even if they talk about democracy all the time.

“And there is another point: sometimes democracies and majorities are also dead wrong. We had many examples in history where a majority was not wise, and then it is the obligation of a minority to fight for the truth. And how do you define the truth? The truth for a people is that which guarantees the doable survival of a society, and that is not always and many times in contradiction to the interest of these lobbyists and interest groups. So I am a little more critical of democracy, because I think Plato and Thucydides (the Greek historian) they had a point when they said democracy is a very unstable form of government and it can turn into a tyranny very quickly, so they were not so very appreciative of democracy at all.”

“I think that in the United States, the democracy is clearly not functioning. And there is a big complaint that it is all due to Putin, and all due to China, but as the German historian Curtius well described, also the ancient Greece did not collapse because of external factors but because of internal processes. And there is a parallel because in Greece it was when democracy was taken over over by Sophism, by people who basically denied that there was cognition possible, who denied that there is a Noble Truth, who basically said, you know, everything is rhetoric. Rhetoric, you have to convince people, disregarding if it’s true or not….And a lot of the politics in the United States unfortunately is not so much democratic but it has the infection of sophistry….”

“I think it is extremely important that we construct and build a world where each country has the right of its sovereignity, its different social system, and there should be non-interference because when you try to change the culture of a country it does not function. And the best example of that is Afghanistan where there was war now for 40 years, 20 years of NATO and they tried to impose democracy; they tried to change the values. I had just talked with some Afghani friends who told me that when NATO was in Afghanistan they promoted pop singers who were dressed extremely lightly which goes completely against the cultural understanding of the Afghan people and the result was that it did not work; NATO had to leave, and it ended up as a big defeat of this effort. So I think this should be taken as an example of not to try to proselytize and impose your system on other people and if you look around the world, I have had the fortune of traveling a lot in the past, before Corona [virus] naturally, and I could see the beauty of all of these different countries. Thailand, India, China, Africa, Latin America, there are so many different countries who have all contributed something beautiful to the universal development of mankind. And I think if we let that go and take the best tradition of each country and have a dialogue of cultures among these best traditions, I’m absolutely sure that we would come out of this historical period with a new Renaissance which will embody the best traditions of all countries, but also show the way to a much better future of all of mankind. So, I think that I want to keep my German classical culture, I want the Italians to keep their Italian renaissance culture, India has beautiful contributions with the Vedic writings, the Gupta period, the Indian renaissance; China had many many periods where China was the leading power culturally in the world. And if these traditions are being a part to our lives now, we can actually overcome the present crisis where mankind, where many people are completely hopeless, and think everything at least in the West, in Europe, in the United States—many people think it’s all getting worse and worse and worse. But I think we should take the view of nonaligned movement because you have a revival of the Spirit of Bandung, the five principles of peaceful coexistence, and if each country is allowed to do what they think is best for them, we can build a peaceful order.”

China’s “whole-process democracy” today contrasts with U.S.’s “democracy of celebritism” seen in contemporary news with quotes from billionaires, pop stars, talk-show hosts, and officials. Maybe this is what sociologist Edward Curtin was referring to at Geopolitics & Empire recently when he comments that we have evolved into a people of insouciance. We are so preoccupied with trivia, with avoidance in talking about world affairs, with carefree abandonment on collective responsibility, that it is as if Americans are “tranquilized.”

To find out more visit:
https://www.schillerinstitute.com/blog/2022/10/13/for-world-peace-stop-the-danger-of-nuclear-war-2nd-seminar-of-officials/