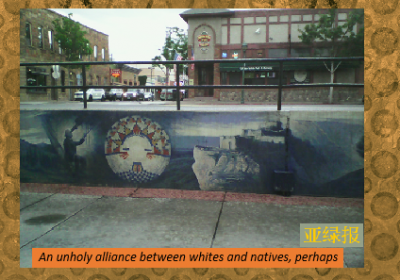 There are a lot of ironies built-in to this story about what in “Sam Hill Wrong in Flagstaff.” First, my arrival was adventitious, due to a broken-down Greyhound bus, and tired of certain troublesome creatures on the bus. Second, generally I had a swell time in Flagstaff: it’s beautiful, the air is fresh and clean. Third, my complaints originated from the second-rate service in an Asian restaurant.

This SCAF (single-chinese-asian-female) was certainly starving and grateful for the wonderful vegan restaurant, the food being deliciously prepared, but the service was bizarre. SCAF entered the premises and was shown a table, but the white waiter clearly did not want to waste any time, even if I was the only customer for half an hour. Telling him I needed a little time to look over the menu, he sat at the host station and studiously ignored me. Fifteen minutes went by before I finally had to call out his attention in order to order appetizer. Again, SCAF had to call out to ask him for the entree. He was also clueless as to what the weather might be like today or tomorrow.

No big deal. SCAF later engaged customers in conversation about the mostly exclusively white tourists in the historic district, and observed the waiter’s unbridled hospitality toward European visitors.

Unbeknownst to me, my comments triggered the local vigilante alert system on minorities. (There was only one black tourist observed). This became obvious after SCAF decided to take a bus ride around town, and talked to the bus-driver about potential destinations. As SCAF returned to the main transfer station in the downtown, she noticed a white SUV security patrol slowly drive into the parking lot, the officer ostentatiously dismount, administer a fish-eyed stare on SCAF and the mildly intoxicated native man nearby, then proceed to patrol the street on foot.

When our bus arrived, this bus security officer returned, blocked the passenger door, and encouraged the bus driver to interrogate the native as to whether he was drunk, or whether he was in condition to, or could afford to, ride the bus.

The motel WiFi also seemed suspicious. Instead of just one portal for free WiFi, there was Amped_Pro 1, 2, and 3. Connecting to the network might have sent data to internet patrols, but there were other hair-raising clues on local spying. It included dark bulbous recording cameras on the bus, along with bright yellow sign near the front stating something to the effect, “Be careful. Your conversation and photograph are being recorded.”

Imagine your conversation, mug-shot, travel information, etc. being rebroadcast to friendly (white) neighborhood patrols to help them track you down. Technology may be coordinated to this effect according to Flagstaff White Racism.

Maybe SCAF wasn’t too far wrong: the same white NAIPTA security SUV arrived at the traffic intersection just as I, along with another native passenger descended the bus several miles later. By process of elimination, they probably worked out which motel, which rental car agency, even which model car I was driving.

To be fair, the creepy feeling of being intensely monitored and surveilled, and the dismissive attitude of (white) tourists and shop-keepers only lasted up to the city limits. The next day, 200 miles away, I felt free of harassment.

However, just as soon as I arrived back into town, once again, I encountered scenes such as racial profiling of drunken native pedestrian (evidently, you can’t even walk around if you are mildly intoxicated and non-White without being surrounded by police). (In contrast, open-air festivities, including drinking, are tolerated among tourists in the historic taverns and surrounding brewery.) The feeling of unsafety and hostility made it almost impossible to sleep. The next day, even though I had driven nearly sixty miles out along Highway 40, at an Arizona state park, there was this militia guy in a dark blue truck who quite coincidentally seemed to be tracking me from one destination point to another inside the park. I felt really lucky that an older couple was there at this one stop.

If there is a sense of sanctioned apartheid system falling into place in Arizona, according to lawyer David Love, it’s not surprising. In “What in the Sam Hill is Wrong with Arizona,” he criticizes a recent law designed to discourage illegal immigration by encouraging racial profiling:

Arizona’s new anti-immigrant law is unconstitutional and cannot stand in any reasonable society. The worst in the nation, the law allows police to stop anyone suspected of being undocumented, and demand proof of citizenship. Those unable to produce documents showing they are “legal” can be arrested, fined $2,500 and locked up for up to 6 months. The law makes it a crime under state law to be in the U.S. illegally, whatever illegal means.

Minorities and native people continue to struggle against the odds, but when the law encourages racial profiling and even vigilante border patrols, Jim Crow style governance begins to breed, as Representative Raul Grijalva describes in an interview with Southern Poverty Law Center (SPLC):

Of course, I also experienced a whiff of this contagion. Not only did I feel as if the Whites in the area were actually accustomed to disregard or brush off minorities, at the grocery store, I actually even began to stare at other people of color, as if we all somehow deserved our stigmatized treatment. Under the Jim Crow system, people of color even begin to believe that they are lucky to be awarded tokens.

Representative Grijalva and other local officials even received death threats for suggesting federal intervention, such as vigilante investigations and improving immigration policy through reforming laws. Nonetheless, Grijalva maintains that open legislative debate is necessary to provide an airing of the interrelated issues.

Unjust laws, according to Love and Dr. King, are not only not worth the paper they are written on, they deserve to be ignored or disobeyed, because such laws tend to stir up hate, divisiveness, inequality, and in the long term, a lot more unrest.

In retrospect, my time in Flagstaff was rewarding, yet it was also ominous. If I can’t feel comfortable visiting their historic district, if I must resort to buying groceries and hiding out in the motel room to eat, if I feel hounded by unmarked white cars or state police, then it is not a safe place to live for very long.

[A]rizona is one of our more overtly racist neighborhoods, (i dont like dining in flagstaff or page or williams when i drive thru, and have taken to packing my own food and eating in CA, then in NM where the Navajo say naught, they don’t care for ANY of us)

In summary, while I had my troubles of nearly the opposite kind on Greyhound, my perspective is that it’s a sad reflection on the levels of desperation and insecurity floating around the country when all these different types of intolerance, absence of empathy, and harassment abound.

Rather then deflect our problems from one group onto another as a way to rationalize our status-minded egotism and pursue our right to blinkers-on, we need to probe our national habitude and international roles more deeply, because this is surely where much more peace, love, and trust should emanate.