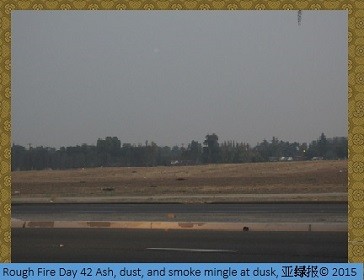 The Rough Fire is the biggest fire this summer in California. The fire, grown to over 140,000 acres, is less than 40 miles east of Fresno and runs north along highway 180 inside the Kings Canyon National Park.

Reported size of the fire varies according to the amount of the burnt ground, but estimates range from 50,000 to 80,000 acres. Winds, steep terrain, and unpredictable weather conditions have made it extremely challenging for fire-fighters and emergency personnel.

The fire began by lightning strike on July 31, 2015 and today (Day 50) it is finally 68% contained. For the past few weeks, the fire remained stubbornly below 30% contained.

Factors in difficulty fighting this fire included inadequate number of personnel. For instance, the Forest Service bragged about the reduced numbers needed over the Labor Day holiday, but as it came within a couple acres of historic Grant Grove in Sequoia National Park last week, they suddenly decided to increase the number of firefighters to over 3000 people.

Of course the severity of the drought (in its fourth year) means that there have been a number of ongoing fires in California throughout the summer. Here is some informational resources:

As you can see from the satellite view of the Rough Fire (image below), steep terrain and nasty winds causes the fire to “jump the river”; term used when brush across the North and Main Kings River tributaries catch fire, for instance from drifting embers.

Border of Rough Fire shows it has jumped the Kings River along Hwy 180 (Satellite photo from http://inciweb.nwcg.gov/incident/4456/)

How all this will affect the future water quality of Pine Flat Lake (a reservoir) is anyone’s guess.