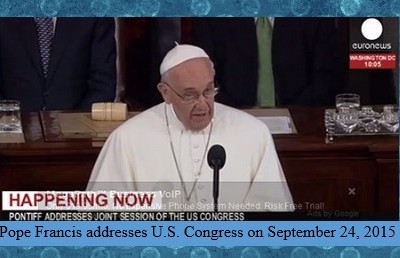 Pope Francis’s speech to the Congress yesterday emphasized the need to work together, to take care of the poor, and the moral imperative of climate change. His text contains much in the way of moral allusions and transcendent perspective and spoken with a heavily accented English was difficult to understand at times. In fact, his speech is so unusual in the context of today’s barrage on materialism that it was helpful to watch the follow-up show with Thom Hartman interviewing Robert F. Kennedy Jr, a dedicated environmental activist.

Pundits say whereas yesterday’s speech to Congress was a gentle admonition couched in spiritual transcendence and emphasizing human engagement, today’s speech at the United Nations is a critique contrasting the UN mission with it’s relative disengagement from the implications of war, poverty, and the disease of climate change. In both speeches the pope emphasizes the immediacy of authentic action, ones not premised on false green solutions and war options. We also need to amend our cultural outlook and our increasingly wasteful habits.

When it comes to the care of our common home, we are at a critical moment of history, we still have time to make the change needed to bring about a sustainable and integral development, for we know that things can change. —Pope Francis

It is really a touchstone when you can hear the Pope—in a great shift from the distal stance of other popes on current events—mouthing words such as “sustainability”, “the rights of the environment”, “intrinsic value”, “interconnected web”, “individual dignity”, “ecological deterioration”, “false rights,” and “exploitation.” You feel for once the droll life-force merging with the spiritual preserve.

Terms used by a variety of grassroots advocate organizations in repeated calls for ecological justice, human rights, peace activism, charity or those working to ban or control human trafficking are necessarily resonating among those at the front ranks in administering. For who else but religious leaders understand intimately the toll on churches, temples, and ministry due to growing numbers, from homeless graduates mired in debt, the elderly, the unemployed, to the international exploitation of displaced peasants deprived of their land, of the systematically disenfranchised?

Although Pope Francis is a trained Jesuit, his gentle language and manners is reminiscent of the Franciscans, whose founder St. Francis of Assisi connected the Golden Rule with the inherent rights, dignity, and worth of all life. Translating this message to today, the Pope’s themes hone in on inclusionism rather than an increasingly socially fragmented society stemming from oppressive lending policies. With regard to climate change, although the Pope did not explicitly use this term much, he did speak at length on the need to respect the environment.

The rights of individuals and environment must be forcefully affirmed. We must respect the true rights of the environment. Why? For two reasons. One, we live in it, we are a part of it. Two, it has intrinsic value…Any harm done is a harm to humanity…In all religious environments the environment is respected, yet nations exclude, practice exclusionism. —Pope Francis

We need more fair solutions, and this includes plans for peace such as the Iran Nuclear Deal which the Secretary of State and United Nations team has worked dedicatedly towards, and for which the Pope voiced his support.

The Pope closed his speech with quick flourishes on a number of issues, anything from the Paris Summit and the 2030 sustainability agenda–hopefully not packed with false solutions–to decrying the silent war taking place due to the growing narcotics trade. He compared the mission of the United Nations with the results on the ground. It is “not just technical instruments and statistics” but the rights of people to lodging, labor, land, spiritual freedom, food, water, civil rights, and a human-natured self-development agenda.

The edifice of modern civilization must be built on spiritual principles.

True to this belief, the Pope first blessed the grassroots audience outside, then blessed the United Nations Assembly at the end of his speech, and later outside, shook hands with children.

He will be holding an interfaith meeting with religious leaders from around the country later today in New York City.

Here is the link to the video of the speech uploaded to YouTube: