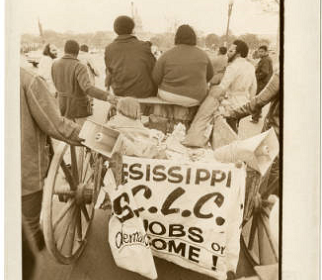 The other is led by the long-standing Poor People’s Economic Human Rights Campaign (PPEHRC), a movement begun over 25 years ago as an outgrowth of the Kensington Welfare Rights Union (KWRU) in Philadelphia. Over the years, PPEHRC has established a national network for political actions related to poor people’s economic human rights, and led many marches including bus tours in support of the unemployed, the working poor, the downsized, the homeless, the victims of welfare reform and NAFTA, and the cast-asides of the new economy. Both Poor People’s Campaigns cite Articles 19, 23, 25, and 26 of the Universal Declaration of Human Rights which was adopted by the United Nations in December 1948. These articles include the right to freedom of opinion and expression; right to work in a job with free choice of employment; right to form and join trade unions defending equal pay for equal work; right to a decent standard of living, especially for mothers raising children; and right to a quality education that promotes respect for universal human rights and fundamental freedoms. Many of these basic precepts were first developed and promoted during the Age of Enlightenment by philosophers such as Thomas Paine, who authored the Rights of Man (1791). After struggling time and again to link civil rights to the more wide-spread massive civic unrest during the 1960s, Dr. Martin Luther King, Jr. in 1966 began tinkering with the idea of subordinating black civil rights under the more class-based fundamental human rights struggles taking place around the world. However before his plans were complete, and while undertaking to mediate collective bargaining for sanitation workers in Memphis, Dr. Martin Luther King, Jr. was assassinated on April 4, 1968. Nevertheless, the Poor People’s Campaign cause continued under the leadership of Pastor Ralph Abernathy and the Southern Christian Leadership Conference (SCLC).  Supported by teachers and teamsters unions, and along with the Student Nonviolent Coordinating Committee (SNCC), it became the most authentic class-based movement of its kind, including many Black, White, Brown, Yellow, Red women, men, students, single-parent households, families, and more. Even though the fear-mongering tactics of the FBI continued, widow Coretta Scott King steadfastly led the Poor People’s Campaign women’s contingent in marches in Washington, D.C. beginning on May 12, 1968 and continuing every morning during the first two weeks of the six-week campaign. Their persistence drew the attention of the politicians of the day; at least a few visited Resurrection City. Soul of Poor Folks: Auditing America in 2018
During the 50th anniversary, a variety of activities are being organized all around the nation from historical symposiums and special exhibits, to daily teach-ins and inter-state marches. The Poor People’s Campaign led by Reverend William Barber, II and Reverend Liz Theoharis is “a national call for moral revival.” Their campaign is supported by a broad spiritual establishment; many different religious sects are contributing to its planning all around the country. Poor People’s Campaign speakers at Capitol Hill East for June 4, 2018 Moral Monday, The Right to Healthcare and a Healthy Environment, photo by AGN

Every day between May 13 to June 21, 2018 moral actions in the form of teach-ins, readings, performances, rallies, and protests are planned in cities nation-wide. Although the overarching theme is “a moral agenda based on fundamental rights,” the topics vary. Subjects the campaign today covers include 1) systemic racism; 2) poverty and inequality; 3) ecological devastation; 4) the war economy and militarism; 5) national morality. For instance, on Monday, June 4, 2018, the Right to Healthcare and a Healthy Environment was the theme of protest on Capitol Hill. Numbering over 300 people, protesters held a variety of signs calling attention to the plight of poor people denied urgent medical care or denied access to clean public drinking water.  The contradictory actions of Congress which continually downplays the needs in national infrastructure speaks volumes on the moral breach and acute imbalance between the federal government’s spending on the military overseas versus austerity measures at home. At the rally, Reverend Beth Johnson from California spoke about the desperate conditions brought on by drought and over-pumping of ground-water. Private wells have also become polluted due to hydro-fracking chemicals and seepage. Reverend Whitaker of New York spoke on behalf of the U.S. Commonwealth of Puerto Rico, whose real death toll from Hurricane Maria related electrical power outages, and lack of access to sanitation, healthcare, schools, and paid work, especially in rural areas, is now estimated at nearly 5,000. (WSWS.org article outreach worker Jose Bellaflores confirms this saying, “We are dealing with a suicide problem that is hard to imagine. And the communities are trying as best as they can to cope and help people but we need resources in order to recover.”)

Not only is climate change and concern about the environment a theme, but lack of access to healthcare due to reductions in federal and state subsidies in medical care. Leslie Boyd of North Carolina spoke about the untimely death of her son who was denied operational surgery for colon cancer in spite of a diagnosis. A mother from Kentucky shared a similar story about her daughter being denied needed medicines that would have extended her life. People in the crowd held signs and spoke about being denied healthcare due to reductions in Medicaid spending in their state. A group of nurses stood together as a coalition. A team of doctors also held signs and stood by while the mother from Kentucky shared her pain. A contingent group of protesters followed up the march with a visit to the Rotunda, among them, one older middle-class woman who despite having only one leg, was determined to share her frustration with the medical care system with her legislator. The lack of investment nationally was contrasted time and again with the bloated military spending. In fact, the insensitivity of today’s neoconservative politicians is almost beyond belief. Freshman House Democrat Jimmy Panetta (California) told Politico newspaper (June 5, 2018 Vol. 12 No. 49) in a recent interview that climate change “is a driver of instability when it comes to our defense strategy” but “that doesn’t necessarily mean the ship turns with it.” It was as if Panetta was conjuring up the image of the sinking Titanic with its limited number of lifeboats. March for Our Lives, New Orleans to Detroit March, and much more

Meanwhile, March for Our Lives, led by PPEHRC leader Cheri Honkala, is slowly and laboriously making its way up to Washington, D.C. from Philadelphia, Pennsylvania. According to the map, the march from Philly began June 2, 2018 and is due to arrive in Washington, D.C. on June 12, 2018. As of Friday, June 8, 2018 the group is heading towards Baltimore, Maryland. At the National Mall, PPEHRC plans to meet up with the Homeless Marathon for a weekend of commemorative 50th Anniversary Poor People’s Campaign activities. To learn more about March for Our Lives, visit http://economichumanrights.org/2018-poor-peoples-march/. To stay updated on simulcasts, visit https://www.facebook.com/ppehrc or bookmark http://news.homelessnessmarathon.org/.

A  schedule of 50th Anniversary Poor People’s Campaign commemorative performances, rallies, and other events (including mock-up of Resurrection City) is planned from Saturday, June 9th through Tuesday, June 12th to be held at Dupont Circle.

To learn more about events taking place throughout the month of June, visit the Unitarian Universalist Association Poor People’s Campaign page which shows a list of what is happening each week in your area: https://tinyurl.com/y92g2p7m

Top image: Mule caravans traveled from Mississippi to the nation’s capital emphasizing the plight of the poor, from D.C. Public Library Special Collections, reprinted with permission