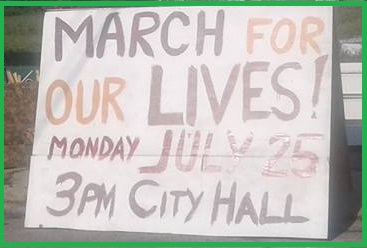 As the Democratic National Convention finally opens in Philadelphia, Pennsylvania tomorrow, most of the nation is breathing a sigh of relief. Everyone watching the mainstream media television knows what will happen. Every day the commentators are either beating up on Donald Trump (the bad guy) or lauding the Hillary Clinton nomination. Democratic contender Bernie Sanders, earlier identified as a sheepdog by a variety of pundits, is indeed living up to function.

With everything just about wrapped up, the DNC is supposed to be nothing more than a powerball rally, full of the expected inflated rhetoric, filling any electoral voids with false hope, and possibly with a conciliatory nod or two in Sanders’ direction. Considering the way that any suspicions regarding vote counts, or recounts, or absentee ballots have been handled, what can possibly go wrong?

Enter the Poor People’s Economic Human Rights Campaign (PPEHRC) led by Cheryl Honkala, Vice-Presidential nominee for the Green Party. PPEHRC has led successful long-distance marches and campaigns for the rights of the poor. In 2010, it included the 24-city caravan from New Orleans to Detroit. In 2013, they marched with Shut the Chamber in Operation Green Jobs.

As early as March this year, a determined Honkala decided to formulate a plan of action for real Democrats, the disgruntled disenfranchised overlooked voters whose job prospects are diminishing every year, and whose wallets are worn thin.

March for Our Lives intends to make a splash, and make its presence felt, during the 2016 DNC. The March starts at 3pm at the Philadelphia City Hall on Opening Day of the DNC on July 25th. Ms. Honkala told Counterpunch that permit or no, their march is scheduled, and will include (former) Bernie supporters.

They will be leading and following a host of supporters according to Honkala:

It’s on opening day of the Democratic convention. Members of Vets for Peace are part of our security team, our peace team. Our marches always begin with people from the disability community that will be in wheelchairs at the front, as well as our elders and our children, and we will step off at three o’clock. We’re hoping and praying that we will not see a repeat of the Democratic National Convention in ‘68 in Chicago, but we know that this march is incredibly important. A long list of the most basic social needs are being neglected in Philadelphia while the city spends $43 million dollars to build up the police state and militarize the police, and we know that priorities are skewed in the same way all over the country.

AGN concurs that there is much to march about, considering how things have gotten worse, despite publicity otherwise, over the past eight years. Homelessness continues to rise due to gentrification; union memberships have dropped to an all time low; and real wages continue to stagnate.

Worse, new race, class, and intergenerational warfare is flaring. For instance, in the D.C. metropolitan region, gentrified city-dwellers not only are insulated from local historical-cultural contexts; corporate shopping malls are doing everything they can to promote virtual cultural bubbles and sybaritic indifference.

Voters who are disenchanted with Hillary Clinton range not only from the far left but also to the libertarian right. According to William Blum (Anti-Empire Report #144), Secretary of State Clinton’s knowledge does not trump lack of experience:

American foreign policy is the greatest threat to world peace, prosperity, and the environment. And when it comes to foreign policy, Hillary Clinton is an unholy disaster. From Iraq and Syria to Libya and Honduras the world is a much worse place because of her; so much so that I’d call her a war criminal who should be prosecuted. And not much better can be expected on domestic issues from this woman who was paid $675,000 by Goldman Sachs – one of the most reactionary, anti-social corporations in this sad world – for four speeches and even more than that in political donations in recent years. Add to that Hillary’s willingness to serve for six years on the board of Walmart while her husband was governor of Arkansas. Can we expect to change corporate behavior by taking their money?

Thus, this will not merely be a symbolic march ending with a fart-in outside the DNC convention center on July 28th. It’s designed to draw-attention, allow citizens to share, organize, vent, plus garner more supporters for the Green Party.

March for Our Lives meeting on July 25th, 3pm

South side of Philadelphia City Hall March for Our Lives – Opening Day of the Democratic National Convention: July 25, 2016