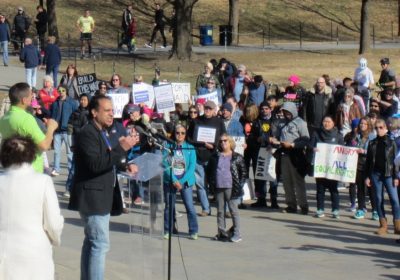 Washington, DC– Amid early spring-like weather, people gathered at the steps of the Lincoln Memorial on Saturday January 27, 2018 11:00 am for the People Demand Action March.

“Hate will not make US great!” sang one sign by a young blonde student.

“Impeach the Traitor” with a cute peach depicted on a cardboard sign by a brunette.

Although there were less than two thousand visitors, quality of protesters outshone quantity. The rally began with a taped speech from Reverend Martin Luther King, Jr. (“I’ve been to the Mountaintop“). The National Anthem was sung, but with one critical difference: this time citizens were asked to bend their knee in remembrance of all victims of police brutality. No reason to not dream big, bigger, and biggest!

Rosamond and James Johnson sang the gospel song, “Lift Every Voice and Sing” reminding you of past Freedom struggles.

Amid picturesque scene with Canadian geese fly-overs and a backdrop of the reflection pool, tourists from faraway places lingered and took photographs of the grassroots protesters with their signs and costumes.

People held up slogans that reflected the rainbow themes and which you noticed with each issue touched upon.

Protesters had traveled from Maine, North Carolina, Michigan, Ohio, and the Great Plains. For some women, it was the second weekend of protest in a row: they wore the pink pussycat hats signifying the Women’s March 2018. Bruce Brunell spoke out on the need to “Stand for Love” and symbolized that in African cultural garb. Other colorful marchers included a couple of trombonists decked out in Yankee Doodle Dandy. Standing for love instead of war

Ahmed of Political Action Network defended his citizenship and an authentic democracy:

“I am American by choice. I am a proud Muslim-American. Do not take freedom for granted.”

Many people held up signs echoing what they think is wrong with America today, whether in the person of President Donald Trump or our government led by his cabinet appointees.

“No Fascist USA” said one sign held up by a well-dressed Washingtonian.

“Proud to be American, Not Proud of Our Government” echoed the sign of a fashionable hippie.

The importance of restoring our sense of self-worth and dignity comes at a time when elected politicians are making off like thieves in sanctioning special real estate tax breaks, conducting insider trading, and getting away with sexual molesting. Paradoxically such privileges are accompanied by the rich’s antipathy and callousness towards the poor.

Stan Nolan of John Hopkins University College Democrats delivered a speech sharing his voluble concerns over the plight of students of his generation. These include increasing campus polarization, voter apathy, and just being able to stay energized on issues when the credibility of the media has taken such a hit.

Jessica Prozinski of Stop Trump Ann Harbor bravely described her fight against cancer, and how she helped lead We the People of Michigan in forming a Rapid Response team to slow down the deporting of Muslim, Asian, and Latino immigrants. Over 100 Iraqi Christians were deported in June 2017, despite the fact that they were here legally, and will face extreme religious persecution in Iraq.

The rally was also punctuated by rap poetry that also contained fight-back messages, such as “Take Back the White House” and “Run for Office in 2018.”

Jay Winter, long-time host of Nightwolf at WPFW, reminded the crowd of a seemingly distant past:

“President Barack Obama did more for American-Indians than all the previous Presidents combined.”

His group included the Native American Drummers group of Washington, DC who performed at the end of the rally.

Deanne Barry “a proud humble citizen” related the touching story of the struggle to obtain a health operation for her young daughter. Healthcare and the environment was a theme echoed by Jessica, and Keisha Lewis, cofounder of a group combatting environmental racism. Keisha mentioned the hair-raising details of discovering a toxic waste dump next to the homeless shelter where her mother lived.

“Free the Land, Free the People…There is no single issue justice…” “A healthcare plan that will murder us all”

Since the Trump agenda includes tax breaks for the wealthy and strengthens the military while proposing budget cuts for many civil service government departments and government programs, students, minorities, and laborers are rightly worried. Renee, a social worker from Maryland, detailed the desperation and plight of injured workers addicted to opioids, the homeless having no where to go, workers who have lost all their benefits, and mothers, seniors, and young children whose lives are at-risk.

Lionel Carrera, a John Hopkins University student from Las Vegas, and a child of immigrants, described and alluded to how many minority students are living in fear, enduring discrimination rather than speaking out, and struggling to make it through college at a time when the availability of scholarships, work-study grants, and student loans are being axed.

Never have college students been so cognizant on the limitations of the stressed capitalist economic system as today, and the fact that overspecialization and efforts are no guarantee of reciprocity in opportunity.

Two young people at the base of the steps waved red sickle and hammer flags–somewhat a rarity. There were paramilitary police posted on the lower roof of Lincoln Memorial; even NPS officers and Army Reserve soldiers were posted around the perimeters of the rally.

If it feels like many ordinary citizens are also worried about civil rights and labor rights taking a hit under the Trump Administration, you are not alone. Placards also included slogans such as “No Going Backwards” which could refer to anything from union-organizing to the repeal of human rights protections as basic as clean healthy drinking water. Because January 2018 is Human Trafficking Awareness Month, AGN was particularly moved by the testimony of a brave older African American woman who detailed her struggle with the justice system as a rape victim. As a woman and a rape victim, and particularly as a minority, you are forced essentially to relive the violation repeatedly if you seek prosecution. While under President Obama, the US made progress in fighting human trafficking, for instance, the Trafficking Victims Protection Reauthorization Act (2013), President Trump appears to favor corporations such as hotels which hire low-wage guest workers even when locally skilled workers are available. In fact, according to National Guestworker Alliance, Trump’s February 2017 executive order was a major step backward:

“The order is a fundamental policy regression from gains the anti-trafficking movement has made in recent years…[It] completely ignores root causes and the conditions of vulnerability that allow trafficking to flourish. It makes no mention of the responsibility of corporations whose supply chains profit from forced labor, and it fails to address victim protections and victim services.“

The rousing rally ended at 1pm with marchers proceeding north from the Lincoln Memorial Circle. They headed east along Constitution Avenue, going along Pennsylvania Avenue around the White House, and then planned to return to the National Mall.

In summary, a variety of marchers and protesters showed up heedless of precise details on who the event planners were, with a loose spontaneous self-empowering agenda. Even if the rally was a tiny fraction of the 1963 Civil Rights Protest; even if there were paramilitary police and secret service agents; most people were still drawn to the belief that citizen engagement at every level contributes to a strong and vibrant democracy.