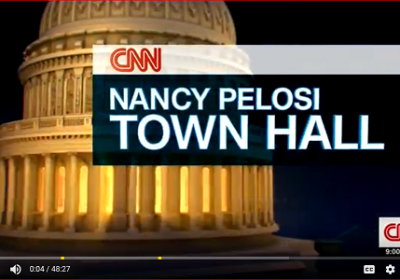 At the town hall in Washington, D.C. moderated by Chris Cuomo, two members of the audience asked about the American Health Care Reform Act (AHCA) of 2017 (H.R. 1628).

Kati McFarland, a 26-year old college student with pre-existing condition, asked Pelosi: “What will you do to ensure lower out-of-pocket expenses, and sustaining and extending the Affordable Care Act and going against everything the AHCA is standing for?”

Obviously the Democratic Leader has a lot to say since under her leadership as House Speaker in 2010 the Patient Protection and Affordable Care Act (ACA), then Healthcare and Education Reconciliation Act were passed.

Several key messages were conveyed in her replies to McFarland, and Dave McDonald, a small business owner from Utah who asked: “Can you commit to specific policy areas that the Democrats will work with Republicans on, to make health care better for all Americans, even if that means we have to repeal certain provisions of a law that you worked so hard to pass?”

Chief among the ideals Pelosi conveyed (with quotes):

Let’s hope the same kind of advocacy that prevailed first in the House [under the ACA] will prevail in the Senate, then we can talk about how we can expand the pool. The more people in the pool, the healthier the pool, the lower the costs. [Then we can talk about] how we can have more middle income people have access to the tax credits etc., how we can lower the costs of prescription drugs—because that’s one of the biggest contributors to the increase in costs in medical care...

Moderator Chris Cuomo probed the question further asking whether or not the ACA was still fixable, since cost associated problems have festered.

Why would anyone do this? Pelosi cited differences in philosophy:

There’s a philosophical disagreement as to whether or not we should have healthcare, and one of the things that’s holding it up in the Senate is that some of the Republicans want it to go even worse. Even worse.

Pelosi was describing neoconservative plans to eliminate maternity care, and other parts of the ten essentials such as routine check-ups.

This is why Pelosi emphasized that the bill is “death panel” and “not a bill in good faith.”

They don’t want to expand Medicaid. You know how many people…like one in eight people in our country depend on Medicaid. Seniors take advantage of it for longterm healthcare. People with disabilities, poor children, there are many of them the least costly of the whole bill. Medicare–in separate legislation–they want to take away the guarantee of Medicare because they want it to, in their words, ‘wither on the vine’.

The only way to fix the Affordable Care Act is to kill the Republican bill because they can’t mate. There is no reconciliation between the two. Because one is for healthcare for all Americans, not just the privileged few. And the other is a tax-break for the wealthiest people in our country.

Unfortunately the climate is such that Republicans are deliberately fostering the perspective (ads, trolls, tough-talk by pundits) no one cares if 24 million people no longer have access, those with chronic health conditions are displaced, or an age tax applies.

It moves 600 billion dollars from working class families to the richest people in our country. It’s a tax bill in disguise as a healthcare bill. It’s a very dangerous bill, to people, children, and other living people.

Wealthy Americans will no longer pay 3.8% tax on investment income and 0.9% tax on income over $250,000. Annual fees supporting low-income insurance subsidies will be repealed also, meaning health insurance providers, pharmaceuticals, and medical device manufacturers can hasten Obamacare failure because they no longer have to pay in.

Dr. Martin Luther King, Jr. said that of all the inequalities the most unjust and stunning is the injustice of access to healthcare, because people will die…

In summary, Ms. Pelosi emphasized that the bill must be stopped, since it’s a no faith bill.

Call, write, meet with, show up at the offices and town halls for your legislators to defend your right to affordable health care, and fight repeal and replace.