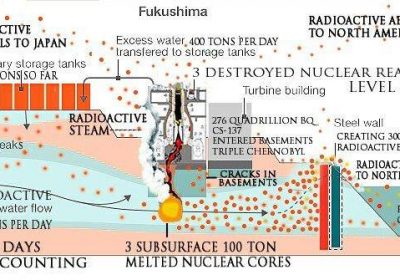 The amount of information on Fukushima nuclear reactor disaster is something the mainstream media makes hard to focus. Censorship on Fukushima Daiichi began shortly after the tsunami event on March 11, 2011 (3-11). Then President Obama encouraged media downplay, similar to the Deepwater Horizon oil spill, forcing people to not pay attention and take little precautions. As alternative media reports, however, there was and continues to be valid reasons for concern, due to the ongoing spread of radiation.

Here is what then-President Obama stated in a press conference on March 17, 2011: Let me repeat that. We do not expect harmful levels of radiation to reach the United States whether it’s the West Coast, Hawaii, Alaska or US Territories in the Pacific.

Furthermore the Centers for Disease Control and Prevention and public health experts do not recommend that people in the United States take precautionary measures beyond staying informed.

The Japanese government and TEPCO have been even more evasive over the past years. Instead of fully investigating and identifying the malfunctions, they have issued statements, often proven to be either inadequate or downplaying the public’s concerns. The results are long term; undocumented inexplicable genetic mutations; rise in autoimmune dysfunction; billions of dollars needed to safeguard unsafe areas; and even nuclear industry plans to dump Fukushima nuclear waste into the Pacific Ocean or ship it to other countries.

Whether it is ENEnews, EnviroReporter, or A Green Road Journal, these independent news services are piecing together what ordinary television viewers are denied. When TEPCO finally admitted that several of their Fukushima nuclear reactor cores had melted, it was due to the pressure of independents and activists. Real news demands a willingness to search for the truth, and help the public prepare for worst case scenarios.

The trail of Fukushima coverup not just resulted in tears and dislocation for local Japanese citizens, but a revelation in shocking discoveries, all the more painful because from day one, the establishment insists that everything is, or will soon return to, normal.

Nothing is normal unless it is a new normal that includes repeatedly raising allowable limits on pollutants and radiation. The unexplained mass extinctions going on in the Pacific Ocean is not normal. The Southwest drought is not normal and began the same year as the nuclear catastrophe still unfolding. It is absolutely abnormal when academic research scientists are forced to sign non-disclosure agreements and their reports are made unavailable. Workers are told not to threaten the bottom line whatever the costs.

With official dearth of information, the public is left to guess at a range of possible disposal methods, quantities, and concentrations. In Japan, Prime Minister Abe passed a law that allows imprisonment of journalists investigating and exposing the truth about the situation in Fukushima. Despite this, Japanese whistleblowers, mothers, children, homeless people, activists, workers, and scientists want the truth to be heard and disseminated. This includes groups such as Fukushima Response which tries to put a human face to things.

The amount of radiated water is estimated at a minimum of 300 tons per day of leakage from various parts of the plant including storage tanks, drywells, tainted groundwater and surface water from cleanup operations, and more. However it can be more than double that whether due to contained or uncontained ground-affected contamination. It should also include all streams and rivers affected by fall-out in the air or from soil deposition.

Dr. Paolo Scampa estimates that 300 cubic meters of water per day alone is flowing by the active coriums, which are still fissioning away, although melted into lumpen shapes. Bear in mind that Fukushima Precinct is a lush moisture-rich region receiving on average over 50 inches of rainfall per year. It has a typhoon season that lasts from May to October.

In AGN‘s Table 1 Radioactive Water Leakage, the base level is 300 tons or 72,000 gallons per day, which ideates into a 10 feet deep pool about 35 feet diameter. (Hint: You wouldn’t be caught dead swimming in it.)

According to Dr. Paolo Scampa in Mainfatti “Fukushima: corio at 530 Sievert now?”

Under the reactors of Fukushima in fact flow streams that bring to sea at least 300 cubic meters per day of water now polluted with cesium, strontium, plutonium, americium, and so on.

That volume stated equates roughly to 10,600 cubic feet per day, rounding up to 80,000 gallons per day flowing into the sea. (Imagine a slightly bigger pool of water 10 feet deep by about 38 feet diameter.)

The problem is that it is difficult to contain the fresh cooling water once it passes through due to pipe and containment system damage. Monitors indicate the radioactivity in these areas is still extremely high, with radioactivity measuring up to 25 Sv per hour, where the allowable norm is 1 Sv per lifetime. Using the conversion factor from Part 1:

The traditional normal allowable is a tiny amount, about 0.12 microSievert per hour. However grassroots journalists from Japan are recording air dose rates along streams and rivers at 0.34 or 0.48 microSv per hour. As for river mud, it is measuring as high as 8 or 9 microSv per hour in Motomiya City in Fukushima Prefecture. Obviously radiation is trickling in from contaminated soil, collection sites, containment bags, the air and trees, although the investigators note that the river may also overflow. Thus a fair estimate of flow into the ocean includes many possible sources including ongoing air emissions which citizen journalist Mako Oshidori notes also includes intermittent gas and water releases from methods used to cool the remaining coriums.

Furthermore TEPCO from time to time issues statements on leaking storage tanks, damaged storage tanks or pipe spills etc. The company issued a statement in the Japan Times (now unavailable) requoted by the Washington Post of 400 tons of water outflowing  daily. In fact there are also reports that the company is building new curtain drains and conveyance pipes to help manage the subterranean flow and overflow. As of late 2013, the site reportedly stores an estimated 90 million gallons of radioactive water. (Hint: The harbor is not safe to swim in regardless what WHOI scientist KB says he feels safe doing.) Civil-engineer Marko Vovk explores the footage of drone cameras showing countless storage tanks, and miles of beach side staging areas with plastic bags sitting there pretty much looking as if they were waiting to be offloaded. (In a follow-up article, AGN will attempt to point out why the number and types of radioisotopes are a clear and present danger, regardless where they are deposited, but especially in the Pacific Ocean.) In the illustration below, you can also see that nuclear power reactor unit 5 and unit 6 were also built right alongside the harbor. There are also subterranean flows passing underneath them, something commentators generally ignore. Alternative media, such as RT.com have reported that these units have had failed generators and explosions, meaning possibly much more radioactive water is emitted than officially accounted for. Including all sources of subterranean, stored, and surface-water flows, factoring in storms, the amount of leakage into the harbor could be up to 800 to 900 tons per day. Now imagine a pool of deadly water about 10 feet deep by 60 feet diameter being eliminated daily into the harbor flowing into the Pacific Ocean. A lot of water, and this is before we try to delve into its deadly contents, much less the international implications.

The need to become aware because it can happen anywhere

By not being able to connect the dots, radiation is being indiscriminately unleashed upon the unsuspecting public, and planned for dumping into the ocean as a solution.  The public relations war includes shifting information around, hiding it from the public, changing the rules on allowable limits, and always ultimately down-playing the seriousness.

According to A Green Road Journal which has followed events with a compendium:

Radiation contaminated foods and liquids are being grown and/or harvested in radiation contaminated areas [in Japan and elsewhere]. These items are then shipped out of the area and consumed, including internationally. The only way to ensure safe, radiation free food is to eliminate the nuclear plants and military nuclear facilities, such as depleted uranium production facilities, and/or test everything before buying it.

Our government has dramatically raised allowable radiation limits, where it is significantly higher than in Japan. Approved fish, milk, poultry, dairy products, meat, soybeans, and krill with previously unacceptable levels of radiation can now be shipped in. The nuclear industry should treat their waste to include human detectable levels of odors like for natural gas, but so far there is no law or incentive mandating detectable markers.

The nuclear industry stranglehold is so materially interconnected with security, corporate domains, and finance that few politicians can withstand them. Yet it is the right and responsibility as U.S. citizens to protect our democracy by being pro-active about our future. Stalwart independent journalists deserve medals of honor for willingness to do what others are told to ignore: documenting extinction events and levels of radiation.