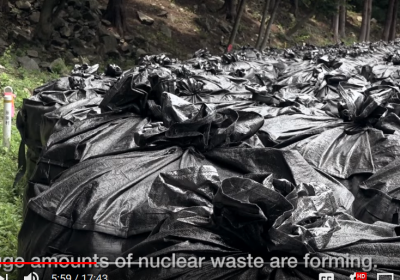 The big question foremost on people’s minds with regard to Fukushima Daiichi nuclear disaster of March 11, 2011 is how much radiation has leaked out of the plant into the environment? Unfortunately due to government secrecy and industry-protectionism, the quality of information is often filtered and the details obscured.

According to the Greenpeace documentary video “Fukushima: Living with Disaster” much of the area northwest of Fukushima nuclear power plant remains contaminated in ways that are unhealthy for raising children. People from Fukushima city precinct are socially and geographically quarantined. The daughters in child-bearing years are advised to not risk having children due to the fear of babies born with congenital birth defects and painful diseases. Physicians are encouraged not to report cancers suspected to be radiation related (such as thyroid cancer or leukemia). Just like in Chernobyl, farmers who grow vegetables or raise animals cannot sell their produce unless they sell it on the black market or feed it to the poor. While the government is committed to cleaning up the waste by scraping off the first few centimeters of topsoil and placing it in plastic bags, there are now tens of millions of plastic bags sitting in staging areas all around the prefecture. As everyone realizes, even durable black plastic bags do not last forever. Under inclement weather conditions, the bags wear and tear. They crack and from the cracks soil springs forth, becomes blown or washed away. This state of affairs of clean up is projected to last years if not decades. So what may very well happen as has already happened is that from the watershed, it leaches into groundwater, and eventually towards the bay.

However the Pacific Ocean is an international water body—even if we were to overlook the boundaries of territorial waters, the sea with its mobile flora and fauna have a way of transporting the radioactive elements far beyond its economic zone. And it is already becoming difficult to assess how much was transported upwards into the air or via evapotranspiration. To date, the laws regarding the quality of the air basically are ungovernable, since the jet stream circumnavigates the globe.

People who live in Japan, Asia, North America, and South America as well as the Artic regions have a right to information that has too often been downplayed. When people who live in Japan dare to question official-speak, their livelihoods are threatened, they are told to shut up, and shunned by neighbors—even killed.

Was there more to the Fukushima Daiichi nuclear power plant than just a six-reactor power generator?

According to Greenpeace 2005 report, Nuclear Reactor Hazards, Fukushima was a designated away from reactor spent fuel wet storage facility, one of only three in Japan. This would account for the high number of spent fuel rods official and unofficial counts. However former Japan Times editor and journalist Yoichi Shimatsu has uncovered evidence that Japan may have had a secret nuclear weapons program since 1954.

Shimatsu has been investigating the Fukushima catastrophe ever since March 11, 2011. After 3-11, national security forces tried to limit and control open news reporting, curtail access to villages and ports where strange activities may be taking place.

Amid these theories former NSA contractor Jim Stone even believes that the Stuxnet virus was used to jam electrical circuits and enable a hidden bomb to blow up. His wild theories are given an airing with Jose Perez and fellow conspiracist James Farganne: Obviously the less the international community knows about what really took place, the less there is to cover up, and the more radioactive releases can continue whether in the air, water, oceans, throughout the ecological systems and bioaccumulating in innocent victims. The suppression of news on Fukushima is supported up to the highest levels. In fact, in 1959 the World Health Organization (WHO) signed an agreement with the International Atomic Energy Agency (IAEA) that they would consult one another as partners with regard to conducting research and release of information on health-related consequences of nuclear power to protect security and trade.

Today the WHA 12–40 Agreement is difficult to locate, however the IAEA openly defends its partnership reasoning that it has formed many past partnerships:

Disappointed with the faithfulness and reliablity of reporting on the Chernobyl nuclear accident of 1986, an IndependentWHO formed in April 2007. It protests the ambiguity of the WHA 12–40 Agreement and possible conflicts of interest. WHO tried to clarify its interpretation of the agreement in a 2001 press release but the suppression of research remains self-evident with regard to willingness to measure and disclose detected radiation levels especially for consumers.

Whether during the Chernobyl disaster and then in Fukushima, but also in relation to all manner of nuclear issues, the evidence shows that WHO has not exhibited any autonomy of initiative or resources in radiation protection. It has to be said that it has clearly renounced its mission. It has been complicit in misinformation about nuclear energy in general and has abandoned the victims of radioactivity.

Among IndependentWHO’s demands are increasing the urgency of how WHO investigates and operates on disasters such as Fukushima and Chernobyl. Independent experts, commissions, panels, and working groups should provide timely interpretive information to the general public regarding radiation contamination and safety monitoring.

Courageous journalists and expert-lecturers are trying to expose the facts because nuclear meltdowns release a vast mix of the most radioactive elements ever invented by humankind. They draw attention to the fact that not only are nuclear power plants the most ludicrous way to provide natural power, but also the among the most expensive, and still with no known process for adequately neutralizing the tons of deadly waste generated.

For Part 1 of this series, see “Over a million spent fuel rods at Fukushima Daiichi”