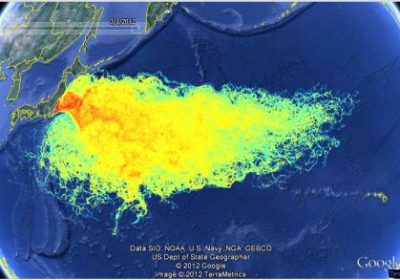 On March 11, 2011, an earthquake hit the northeast coast of Japan with a moment magnitude of 9.0. The energy release along with the tsunami was more than the nuclear power plant, built in the late sixties and seventies, could stand. First there was the earthquake which could have damaged anything from floors and moored fixtures to pipes and rivets in the forty year old reactors. Emergency generator systems did come on, but when the tsunami overtopped the plant’s sea walls, the cooling systems malfunctioned. What happened is still being sorted out but most international officials agree: As to the cooling water systems, the leakage of hydrogen gas may have sparked the explosions, after the systems were damaged by flooding.

Not only were there serious core meltdowns in at least three reactors, but explosions and fire ensued also attributable due to burning zirconium fuel rods. A large unknown remains how much damage the spent fuel pools, packed with highly radioactive spent fuel rods sustained. If they lost all their cooling water, that would have also caused fires and mean that hundreds of thousands of spent zirconium fuel rods remain in an unsafe site containing tons of radioisotopes that will be lethal for centuries to come.

Time and again the government and TEPCO’s response appeared to try to minimize the disaster and its impacts rather than make every attempt to remediate, investigate, and report what happened to the public. Only the pressure of nuclear scientists and physicists with the International Atomic Energy Agency and many other concerned citizens forced TEPCO to admit the scale of the meltdowns:

On the eve of the arrival in Tokyo of a delegation from the International Atomic Energy Agency, TEPCO admits that the cores of reactor 2 and reactor 3 also melted down in the days immediately following the earthquake in mid-March 2011.[200] 16 hours after the earthquake and SCRAM,[15] the fuel rods of reactor 1 had “mostly melted and fallen into a lump at the bottom of the pressure vessel – a state that TEPCO officials have described as a ‘meltdown'”.[201] A TEPCO spokesman Yoshimi Hitosugi stated last night, “The situation inside two and three is almost the same.” TEPCO further stated that the fuel in reactor three took about 60 hours to melt and that the reactor melted down 100 hours after the magnitude nine quake struck.[202] The danger from spent fuel rods

Dr. Helen Caldicott describes of how lethal the spent zirconium fuel rods are in Nuclear Power is not the Answer:

These rods emit so much radiation that a lethal dose can be acquired by a person standing in close proximity to a single spent fuel rod within seconds. But they are also extremely thermally hot and must therefore be stored for thirty to sixty years in a heavily shielded building and continually cooled by air or water. If they are not continually cooled, the zirconium cladding of the rod could become so hot that it would spontaneously burn, releasing its radioactive inventory. Finally, after an adequate cooling period, the rods must eventually be packed into a container by remote control.

Since 2011, remediation efforts have been stymied and proceeding very slowly due to dangers from high radioactivity both from what remains of the reactors, spent fuel rods, and cooling water spills. It was not unusual for radiation meters readings to measure emissions of 500 to 700 microSieverts per hour. To put that in perspective, here is how that would convert into milliSieverts per year where the human normal is 640 milliRem:

Considering that the lifetime limit is 1 Sievert for NASA astronauts, 4.38 Sievert per year would be a lethal dose. Even a tenth of the amount (downwind from the plant in the cities of Fukushima or Iitate) would be lethal in two years. No wonder so many residents had to evacuate, with the the extent of destruction and loss of livelihoods felt by many parties.

After a tour of the nuclear power plant in 2012, U.S. Senator Ron Wyden (Oregon) stated his concerns about the extent of radioactive wastes:

After stabilization of the reactors themselves and control of contaminated water used to cool the reactors and spent fuel pools, efforts to address safe storage radioactive materials and spent fuel seems paramount. The buildings that house four of the plant’s reactors are only a short distance from the ocean…These buildings—all of which appear to be badly damaged—still contain many spent fuel rods.

Fuel rods are not clean and green

A glimpse into the manufacturing process of nuclear reactor fuel elements indicate they are anything but clean and green even if the design is a technological marvel. The zirconium rods are filled with refined uranium pellets the size of a cigarette filter. Each rod is about 12 feet long and half an inch thick. They are packed into assemblies and loaded into the reactor in a very careful process that requires robotization and precision to prevent friction. To begin with, refining the uranium 235 consists of enriching it from 0.7% to 3%, a process that involves huge energy expenditures both in construction of all necessary facilities and the actual enrichment process itself. In fact the entire mining process from digging deep into the Earth for ore, to milling operations, to transport and extraction of uranium from rock, is hazardous as well as complex. Only after a 5-step production process are the final products, uranium pellets, created from enriched uranium hexaflouride (UF6) gas according to the World Nuclear Association.

Hundreds of thousands of spent fuel rods are located at Fukushima nuclear power plant. That fact is evident from the assembly data table which lists the number in reactors 1-4 only as totaling 2724 assemblies. For boiling water reactors (BWR) there are either 91, 92, or 96 fuel rods per assembly depending on the manufacturer. Doing the math, that means that for the crippled reactors alone contained about 261,504 spent fuel rods.

For all six reactors the total is 4546 spent fuel assemblies. To this consider that Fukushima was a designated a spent fuel reprocessing and/or central radioactive waste storage facility, which is what the central storage cell means in the table. The total comes to 10,921 spent fuel assemblies, meaning as many as 1,048,416 spent fuel rods were once in the vicinity (those not melted away or burned).

That is a total of 1 million spent fuel zirconium rods, not even counting the active rods in the reactors.

The estimated total is 1,317,984 of spent and active zirconium rodsrods, meaning an enormous amount of lethal radioactive fissile particles present, particles that pose a danger for hundreds to hundreds of thousands of years whether in air, land, water, or oceans.

The high number of decaying rods laying about alone is a very chilling factor in why plant workers are limited to at most a few hours per day on site. At Chernobyl, the workers called in were called liquidators, many of whom later died from disease. At Fukushima, there had been reports that the workers were drafted from among the ranks of the homeless.

A breakdown on estimated quantities of radiactive material and what kinds of radioactive particles is anticipated in a follow-up article. In the meantime, learning about the nuclear disaster at Fukushima is paramount to helping citizens understand why nuclear power plants are so dangerous. In fact, here is a quote by former Japan Prime Minister Naoto Kan, speaking with Greenpeace in March 2016:

Up until the nuclear accident in Fukushima, I didn’t think something like this could happen in a high-tech country like Japan. But then an accident did happen. It changed my mind completely. For the good of humanity, it is absolutely necessary to shut down all nuclear power plants.

And here is a link to “Fukushima: Beyond Urgent” video by MsMilkytheClown1: