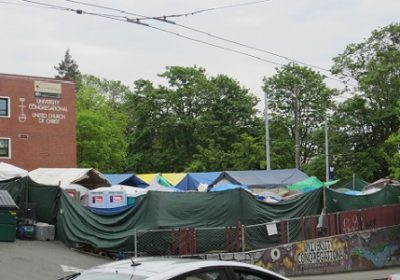 The Guardian online has a series about homeless in America called “Outside-in-America.”

This series is a useful study on homelessness in America, because quality investigative news stories, including long interviews with homeless people in the United States, are a rarity. In America, the topic is generally restricted to small independent newspapers, whose urban presence is increasingly deliberately marginalized by the establishment. Even so-called metropolitan City Paper tends to obscure the homelessness issue since luxury apartment-homes merit more space—besides offering more profit to developers.

In fact, what typically draws in American readers are lurid mainstream media stories about the homeless, such as “frozen to death” or “beaten to death”—perhaps just outside the luxury tower of their dreams.

To be sure, the UK has its own social problem dealing with chronic homelessness, along with the skyrocketing costs for rentals. However the Guardian series offers insight into who comprise the homeless today in the United States, what its implications are, and by extension why American society should try to address the issue head on—instead of pretending they don’t exist.

Anyhow, here’s a brief rundown on several noteworthy articles stocked there to date:

These stories paint the precarious picture of the lower-middle class today. Obviously there is much more, such as run-down urban neighborhoods where the homeless occupy vacant homes or abandoned buildings. The brutalization of the new working class whose outlook has become spartanized by a culture that values drug-dependency, tattoos, sex-work, robotic music, and class-based consumerism is underwhelming.

In fact, as the alternative news sometimes point out, deliberate social ignorance now spans both sides of the Party aisles. The American establishment has evolved to where it avoids and discourages open community discussion—to the point of repression. Whether government offices, educational schools, academic universities, or community town halls, people are encouraged to avoid openly discussing the link between extreme weather, fossil fuels, militarization, and homelessness.

Instead, we are rewarded for passivity. We are encouraged to be good consumers. The definition of activism is donating to the American Red Cross or giant transnational corporations, such as Walmart, who will presumably provide the lead in “helping take care of everything.”

What passes for camaraderie is watching and talking about sports. What is considered a major discussion is standing or kneeling before the American flag.

If you choose to be a more motivated citizen, and visit politics news sites such as Breitbart or the Democratic Underground, you will find the fashionable topics of the day continue to be the debates over healthcare, transgender bathroom rights, and the Dream Act (DACA).

In fact, what international news service such as the Guardian, Independent, or RT are revealing about homelessness and natural catastrophes in America suggests a double-entendre. The series title “Outside-in-America” can well be taken as a spoonerism for “outside-of-America” where Americans may find foreigners and tourists much better informed about the state of our nation than we generally care to be.