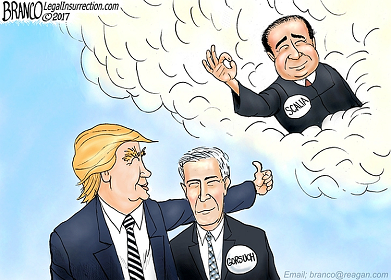 If you take the time to watch the CNN or MSNBC Senate confirmation hearings on Trump Supreme Court Justice pick Neil Gorsuch, it is likely you will be disarmed by his boyish charm, good looks (sort of like Jimmy Stewart) and jingoistic expressions. He sounds like a People’s Man, because he says things like, “Oh gosh!” “By golly!” and appends his statements with “from the bottom of my heart” complete with sentimental hand flourishes.

Demagogues are always convincing because they are populists who take the People’s Pulse then apply the right sort of palaver. It doesn’t matter which side of the aisle they spring forth, they’ve clearly perfected the practice. That helps explain why People remain floored by the frequent prosaic tweets put forth by our new POTUS.

Doing one’s homework, one discovers a few things that don’t add up about Gorsuch.

1- U.S. News reported that when Neil Gorsuch attended Georgetown Preparatory School, he founded the ‘Fascism Forever Club.’ The club was dismissed out-of -hand as just a joke. However at Harvard Law School (where former-President Barack Obama was classmate), Gorusch admitted he was a committed conservative on a campus full of “ardent liberals.”

2- In private law practice, he wrote a brief in 2005 denouncing class-action lawsuits by shareholders, openly siding with corporations, and opining that fraud litigation costs corporations billions of dollars in settlements every year.

3- Common Dreams, a progressive community think-tank, penned an article recommending Democrats block Neil Gorsuch “using all available means.” Apparently they believe that he will be disastrous. It isn’t just that he will be following in Antonin Scalia’s footsteps, but how. Due to the wave of conservative reforms sweeping government agencies, an unprecedented number of decisions are expected to result in challenges. Ron Wyden, Senator from Oregon tweeted:

Wyden is referring to American rights in the 21st century including for immigrants, people of color, LGBTQ community, not just corporations. A very real concern is that the Trump cabal will undermine progressive legislations that have advanced women’s rights, environmental laws, immigration policy, climate change research, alternative energy sources, and high speed rail.

When cases end up in court, how likely is it that Justice Gorsuch is beholden to benefactors? As Bill Wong commented, it’s strange that the NRA would be willing to spend over 1 million dollars for an ad-campaign to elect a Supreme Court Justice.

4- Minnesota Senator Amy Klobuchar challenged Gorsuch on the issue of originalism during the hearing. Gorsuch appears to be obfuscating. He presents himself as reading the Constitution situationally, after all, how can each and every case not be different? Nevertheless his writings indicate that he supports more literal, originalist interpretations of the Constitution.

In fact the ambiguity centering around originalist interpretations is the subject of an interesting article at the Atlantic. Might not today’s conservatives be overly reliant on existential myth-making since ultimately “conservatives rely on the same tools progressives do–text, structure, history, political philosophy, interpretive theory, and practicality“?

This is why Ohio Senator Sherrod Brown plans to vote against confirmation of Neil Gorsuch for SCOTUS. Many democratic or progressive organizations, such as N.C. Policy Watch, Common Cause, Green Peace, Sierra Club, AFL-CIO, Human Rights Campaign, NARAL Pro-Choice, and Alliance for Justice Action Campaign are protesting the nomination.

5- Would a company man such as Gorsuch be able to judge a case against POTUS with a firm fair principled ruling? This could be why NY Senator Charles Schumer tweeted that it might be unseemly to be moving foward on the SCOTUS nominee: 6- Women and minority rights activists are particularly concerned. Alliance for Justice published a report on Judge Gorsuch’s bias on the bench and his insensitivity in cases with regard to disabled children and workers. Amy Howe at SCOTUSblog explicates Gorsuch with regard to abortion, religion and reproductive rights, concluding that his judgments render him more of a conservative. According to the Alliance for Justice, Judge Gorsuch’s record have been conflicting but that “outside of the context of agency adjudication, Judge Gorsuch’s rulings frequently have been adverse to immigrants’ rights.”

Only when you begin to delve into the matter are you likely to notice things are not quite right. Neil Gorsuch is no Jimmy Stewart or Gregory Peck or Perry Mason. He’s not coming to save the small town of Bedford Falls against Henry F. Potter, the meanest banker in town. His experience circumvents the need to defend the lives of wrongly accused minorities. His associations support a new American mythology: playing the role of SCOTUS Justice just as he has dreamed.

If you believe that Neil Gorsuch’s vision of It’s a Wonderful Life just might be an enjambment with the ending of “for far right, big money interest groups, and the advancement of their agenda” there’s still hope. Contact or write your representative to relay your concerns today.