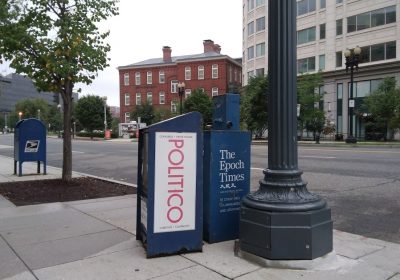 Ten years ago, there were quite a few newspaper vending boxes in downtown Washington, D.C. Especially they congregated around the Washington Post headquarters near 15th and Massachusetts Avenue. Along 15th Street across from the Washington Post, and adjacent street corners, even offered free newspaper boxes. Newshounds could pick up their free copy of The Diplomat, Politico, The Hill, The Blade, Examiner, China Daily, Washington Times, and Epoch Times. The relocation of the Washington Post, and its takeover by billionaire Jeff Bezos seemed to signal the end of an era in print.

Over the past ten years newspaper boxes have dramatically reduced in number and by location. The trend seems to have especially gained ground since the end of 2016 and after the Trump Inauguration. There has been at least an 80% reduction in availability for newshounds looking for free newspaper copies. Big newspapers are looking to cut costs, and vending machines are now only located at popular transit hubs or reliable pedestrian corridors, if they are available at all.

Free copies of The Diplomat, The Washington Diplomat, Roll Call, Asian Fortune, and El Tiempo Latino have underwent dramatic cutbacks in distribution. They are still available but more often these days at university libraries as free venues. The area-wide cut back in distribution also includes African-American newspapers such as Afro-American and The Washington Informer whose boxes might still be found along U-Street.

For liberal and left-leaning newspapers more than the bottom-line is being hit. Travelers, tourists, and young news readers will notice the limited choice. Their hunt no longer yields the diverse stands which used to operate along K-Street or near Dupont Circle. Even chain-stores such as Hudson News have cut back on news rack shelves. These days the most ubiquitous news vending boxes might be Politico, and Epoch Times.

All other small newspapers generated by local community organizations, universities, and nonprofits are struggling with outreach due to the curtailment of public bulletin boards or tabling spaces at community centers.

The impact of less leftist presence includes less visibility, less accessibility, and less sense of presence in general. It can be reinforcing a rightist feedback loop since citizens intuitively understand that the conservatives have gained the upper-hand with virtually unlimited spending money thanks to vast powerful lobbies backing them. For instance, when it comes to employment, Fox News routinely has the most notices. Epoch Times’ respectability has risen due to its “anti-China” and “pro-Trump” coverage.

The idea that the Age of Trump’s democratically authoritarian sanctioning of a media dystopia is beneficial for our society has long-term social costs. Even if the major liberal newspapers are not being physically taken down, even if they are not literally financially imploding, they are having to compete for readership among a changing social demographic. White millennials don’t mind neoliberalist authoritarianism if that translates into a few more hip consumer stores nearby. They are less concerned about a participatory democracy or media suppression since they get all their news from Facebook. As for public forums, they only appear to object to how their bicycle lanes are being obstructed by that historical church holding events which result in double-parking.

While all mainstream media traditionally are obligated to strive for balance in presentation or coverage on issues, conservative-leaning media gets away with glaring omissions or skewed coverage on sensitive issues such as global warming, spending on social services, public works infrastructure investment, and homelessness. Their argument is that the American work-ethic supports small businesses through tax breaks and equal opportunity sufficiently enough so that the market can grow, and the global markets, especially, must grow.

Whether at some point this amounts to outright censorship or self-censorship makes no difference. There is less freedom of speech and freedom of expression when we have a President who routinely encourages attacks on fake media. The Fourth Estate’s responsibility in watchdog reporting, in encouraging ethics and accountability among our political leaders, is being watered down day by day.

Here is what 100 Reporters states with respect to the attack on oversight:

Make no mistake: The attack on the press is not about an Eastern elite. It is poking you, the public, through those who serve as your eyes and ears. It is poking your right to know, without apology, what your government is up to.

Visitors to Washington D.C. are learning the hard way that their tax dollars no longer support their right to know. Judging by the type and number of free newspaper venues available along the streets, whether new, emptied, or rusting away, their choices are already pre-selected.