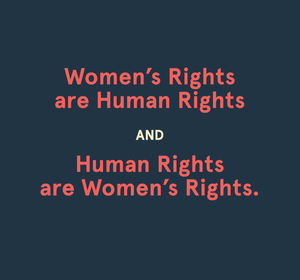 The day after billionaire Donald Trump was sworn in as the nation’s populist Republican President became a moment of reckoning with the public no further away than the avenues adjacent the National Mall in Washington, D.C.

The business tycoon and media star must have been stunned by huge crowds gathered in cities across the country on January 21st. There were 600 marches held in the United States and around the world in a day of rallies in support of Women’s Rights. Around the globe, the numbers rose to the millions in rallies proclaiming the dignity and worth of all humans, but especially of women.

The March for Women’s Rights was initially organized spontaneously as a show of support for Democratic Presidential nominee Hillary Clinton after she conceded to triumphant Republican Presidential-hopeful Donald Trump. It was the brainchild of Teresa Shook, who began organizing using Facebook.

Planners, including renowned womens-rights activists Gloria Steinem, Linda Sarsour, Tamika Mallory, Carmen Perez, Bob Bland, and numerous progressive leaders and workers, are concerned about Trump and his misogynist antics. Neoconservative proposals to assault the panoply of women’s rights presently codified into laws, protections, and services raise the anxieties of many over the ushering in of a new era of backlash.

CNN spoke to one group of women who has bused into Washington, D.C. from North Carolina, braved the cold, and wore bright pink caps. The women shared why they were there. Some had never been to a protest before, but are anxious about what could happen if they no longer have access to healthcare or low-cost screening for cancer.

A sea of pink caps, protest signs, women meeting and sharing their stories magnified the sense of a giant spontaneous support group. Men brought their children, women held signs, they sang, they stood, and they wept.

The Affordable Care Act (ACA), passed into law by Congress in 2010, vastly expanded access to healthcare for people who are under- or uninsured, who have life-threatening conditions, or who cannot afford to pay. It mandates price-controls, and expands services offered at outpatient clinics.

However with an aging population, and many older Americans also under-employed, the repeal of the ACA repeal could have a much wider impact than the 20 million Americans it is said to benefit directly.

KPFA radio station and Democracy Now! livestreamed events taking place all day. One memorable speech was made by film-maker Michael Moore, whose voice crackled and boomed with emotion:

A fitting contrast was the uplifting beats, speeches, and poetry from those reminding us that this was still Black History Month, a month of love, not hate, as Dr. Martin Luther King, Jr. envisioned. Van Jones spoke of a Love Army; Kierra Johnson about what constitutes racial profiling; Donna Hilton, #86G0A06 reminded us that “We are Human, too” even when imprisoned.

Actresses such as America Ferrera, poet Ashley Judd, Sanjay from AAPI, and even elected officials, such as Senator Kamala Harris were present. In fact, over sixty members of Congress chose not to attend the Inauguration as a form of boycotting due to Trump’s indifference regarding civil rights history.

In Washington, D.C. more than 800,000 people, predominately women, packed Constitution and Independence Avenue all the way back to 17th Street (World War II Memorial). Three times as many humans showed up as planned, possibly due to the fact that the incoming president had an unpleasant exchange with Congressman Lewis days before MLK holiday.

Representative AAPI voters are present at the marches across the nation, Sung Yeon Choimorrow of National Asian Pacific American Women’s Forum insists because “we’re far from your model minority; we’re fierce and outspoken — and we will stand strong together against hate and injustice.”

Politicians with experience and acumen are alerting the President, relatively unacquainted with legislative procedures, to not to try to legislate away broadsweeping changes via Executive Orders. Within a day of assuming office, President Trump’s team had already shut down White House webpages from the AAPI initiative, to LGBT, to civil rights, disabilities, and climate change. Protesting a potentially retrogressive new normal is one way for reminding our government it should not become an autocracy.

However Women’s March on Washington goal is about everyone. It includes, embraces, recognizes commonalities which are human factors in survival, according to the site:

The Women’s March on Washington aims to send a message to all levels of government, including but not limited to the incoming Presidential administration, that we stand together in solidarity and we expect elected leaders to act to protect the rights of women, their families and their communities.

At the march, leaders from large national organizations, such as Planned Parenthood, Amnesty International, Black Lives Matter, Council on American-Islamic Relations, ProChoice America, SEIU, National Coalition of Indians Cattle Tribe, and other progressives spoke on the need to rise up, join up, and protest.

The themes of intersectionality and inclusiveness for collective liberation echoed throughout the day. The intersectionality of human and women’s rights, and protective legislation cuts across issues such as national security, healthcare, education, community college, criminal justice reform, job creation, student debt, immigration reform, equal pay, to name a few.

“Women rise up and take the nation back!”

“We are the nation’s moral compass. Follow women of color. We fight for justice in all communities!”

“Our power is rooted in love for humanity, medicine stronger than rubber bullets!”

The personal testimonies by Gwen Carr (mother of Eric Garner), and by Sandra Bland’s mother touched human hearts. Although the National Park Service stopped keeping count of crowd size after the 1995 Million Man March due to a lawsuit threat, the crowd size is estimated by the Women’s March to be over one million in Washington, D.C. alone, and five million worldwide. Listen to Democracy Now’s report on the Women’s March on Washington at KPFA.org here.