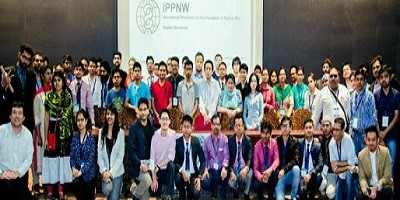 In Part 1, Dr. Helfand talks about three nuclear war scenarios and why the world is increasingly at risk. In Part 2, Dr. Helfand of IPPNW describes specific courses of action, including educating the public and influencing policy-makers.

IPPNW spokesperson Dr. Helfand did not end his talk with just a description of the possible nuclear scenarios, but proceeded to discuss why we need to restart a disarmament movement, such as happened in the 80s. Key to this, he insists, is overcoming our indifference, our false reliance on the success of détente, and our suspension of disbelief.

Dr. Helfand also mentioned antidotes, steps the public can take. He mentioned the founding by IPPNW of the International Campaign to Abolish Nuclear Weapons (ICAN). This campaign reaches out through world-wide education with one goal being to call for the abolition of nuclear weapons. Since its launch in 2007, ICAN has enlisted the support of celebrities, and organized several international conferences.

In Vienna, Austria in 2014, this led to a historic pledge on why nuclear weapons must be abolished. The underlying logic is that if all other indiscriminate weapons resulting in an onslaught of human suffering, such as biological or chemical weapons, have been banned, then nuclear weapons ought to be banned too. ICAN’s draft resolution proposes to “close the gap.”

As news of ICAN’s “Humanitarian Pledge” spread, so too did the number of chapters and NGOs, who reached out to diplomats around the world. By December 2015, the Pledge had received 127 formal endorsements, with one fait accompli being its placement for vote at the United Nations.

At the 67th plenary meeting on December 7, 2015 the United Nations General Assembly adopted the Humanitarian Pledge in the form of Resolution 70/48, and of the 168 nations present for voting, 139 (83%) casted in favour. Presently it remains to convince all NPT signatories and rogue nuclear states to sign on, for as yet, weapons-bearers are conspicuously absent from the list–such being the tendency of nuclear to form a stranglehold on power.

IPPNW has attracted a new generation of young leaders who are making their impact at conferences. For instance, the 1st IPPNW Asian Youth Congress convened in Patna, located in the northeast India this past March. Dubbed “Break the Chain of Violence,” Bimal Khadka from Nepal, and an IPPNW International Student Representative reported:

We came from Nepal, Bangladesh, Indonesia, Kazakhstan, Philippines, Mongolia, and Japan to join our Indian colleagues to discuss how we can use our medical expertise to advance health through peace throughout the region.

In South Asia, emergency medical practitioners busily cope with devastating natural catastrophes such as earthquakes, as well as war-time casualties, events which also contribute to economic and social strife. Thus, topics expanded from nuclear weapons to violence from firearms as well.

Dr. Bassey (Nigeria) who shares IPPNW leadership with Dr. Garkavenko (Russia) encourages “aim at prevention” through educational outreach, because of the number of patients who were victims of armed violence. For instance, One Bullet Story project documents challenges field doctors face when healing such patients.

[W]e concluded it is our prime responsibility and moral duty to raise our voices in many ways, to our colleagues and our political leaders, to help break the vicious chain of arms and gun violence and aim toward prevention rather than curing injuries in the operation theatre.

Lastly, a caveat for grassroot activists is the mention of “one trillion dollars” by Dr. Helfand several times. The sum is connected with President Obama’s expensive proposal to update the U.S. nuclear weapons arsenal over the next thirty years. The nuclear spending plan is described as fantasy, because it is in addition to the 2017 defense budget of $583 billion.

Of course, this nuclear “modernization” plan violates the terms of the 1968 nuclear Non-Proliferation Treaty [NPT], which requires the nuclear powers to engage in nuclear disarmament. The plan is also moving forward despite the fact that the U.S. government already possesses roughly 7,000 nuclear weapons that can easily destroy the world. Although climate change might end up accomplishing much the same thing, a nuclear war does have the advantage of terminating life on earth more rapidly.

Doctors, nurses, teachers, and students, even if from around the world, alone won’t comprise the global advocacy needed. If there is a criticism about IPPNW, it fails to acknowledge the toll due to austerity measures. Everywhere those lucky enough to be full-time wage-earners endure walls of silence enforced by the corporate code. In the U.S., obsessive conversations abound to the extent that many people have become both victims and participants of their own self-policing.

To the extent that journalism, the arts, humanities, ministry, writing, and many more professions remain respectable, workers must compromise or compete with the growing black-market. The only activists remaining are those whose voices routinely go unnoticed, such as bloggers and environmentalists, many of whom support an outright ban on everything nuclear because of its outrageous costs to build, design, start-up, maintain, let alone locate permanent nuclear repositories.

Thus while Dr. Helfand concludes his presentation with a quote from Dr. Bernie Lown, the founder of the International Physicians for the Prevention of Nuclear War with:

The world is full of woes, there are many problems, facing mankind, if we get rid of nuclear weapons, we’ll have time to deal with all of them.

Many people are stuck determining whether the chicken or the egg comes first in survival, and discovering which U.S. candidate truly supports disarmament has proven tricky enough.