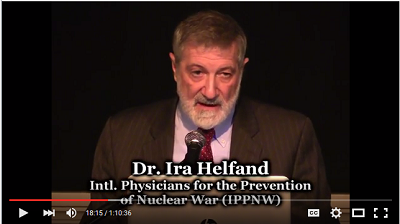 In Part 1, Dr. Helfand talks about three nuclear war scenarios and why we are increasingly at risk for a global-scale nuclear calamity.

Seattle, WA– Dr. Ira Helfand of the International Physicians for the Prevention of Nuclear Weapons spoke for an hour at the Town Hall Seattle on March 20, 2016, including taking audience question and answer. He painted three plausible nuclear war scenarios, with ascending levels of calamity. Helfand concluded with ideas for countering the growing danger, such as an appeal to support the Humanitarian Pledge.

At lowest level event, a dirty bomb is detonated off the New York City harbor. Based on IPPNW research published in the British Medical Journal in 2007, at least 1.5 million people would receive large doses of local fallout. In only one week’s time there would be a death toll of about 300,000 people, rivaling all of World War II American casualties. The economic disruption would be “incalculable” or amounting to a minimum of one trillion dollars.

Helfand makes clear the escalation of destruction in the second possible scenario, a limited nuclear war between two Asian countries, such as Pakistan and India. Since 1948, they have been locked in ongoing tensions over Kashmir. Each country developed nuclear weapons, but have not signed the Non-Proliferation Treaty (NPT). The model presumes that the countries, operating under mutual assured destruction, unleash a total of 50 bombs apiece.

In the first week alone, between 20 to 30 million people will be killed in the first week by the explosions and fires and local radiation. But these effective deaths are only a small part of the story…100 Hiroshima sized bombs detonated over cities produce about 6.5 million tons of soot that gets lofted into the upper atmosphere...What that does is to block out sunlight across the planet…[I]t drops Global temperatures on average about 1.3 degrees Centigrade...[I]n the interior regions of the country the temperature drop would be much greater than [that].

Essentially food production could be critically interrupted, curtailing food export and trade programs around the world. The Asian countries would also want to take care of their populations before honoring new trade deals like the Trans-Pacific Partnership.

A limited nuclear war may result in the [near term] death of 2 billion people…about 1/3 of the human race, we would have to expect that an event of this magnitude would lead to the end of modern civilization…[because] the international economic order that we all depend on would collapse, and we would lapse into something probably quite similar to the Dark Ages

Americans may not be convinced that it could be this bad because, we haven’t thought through our current levels of global interconnectedness, from uranium mines in developing countries, to factories in second-world countries, to complex transport and supply chains, and all the servers and fiduciary mechanisms.

To make matters worse, with almost 16,000 active nuclear weapons, destabilizing situations, computer hackers, human errors, or poor judgment make it statistically likely we will undergo nuclear catastrophe. Add to this the late proposal by President Obama to enable a trillion dollar nuclear weapons upgrade, and there is even more chance for a new nuclear arms race.

Lastly Dr. Helfand proceeds to depict a major nuclear war between two superpowers, such as Russia and the United States. He described in spell-binding details the apocalyptic scenario that would unfold were Seattle to be attacked with 1 Megaton (1,000,000 tons) TNT equivalent of nuclear warheads. For instance, 10 nuclear warheads of 100 kiloton capacity each (100,000 tons of TNT equivalent each) would equal a 1 Megaton gross impact.

Basically, a huge fireball would form with a diameter of 32 miles, accompanied by a 1400 degree Fahrenheit firestorm, so intense and permeating that all of the local oxygen would be consumed, and every living thing would die in the immediate area of 800 square miles.

However because mutual assured destruction means mutual exchange, the attack likely involves multiple cities around the globe, releasing up to 45 Megatons. Multiplying one total metropolitan obliteration event by ten or more would trigger such atmospheric instability, that all-around temperatures would drop a minimim of 8 degrees Centigrade, bringing on the dreaded nuclear winter, and with it, the beginning of a new Ice Age.

Dr. Helfand has been involved with IPPNW since the days when its founder, Dr. Bernard Lown, helped earn it international acclaim for its studies about the medical and environmental consequences of nuclear warfare. His mesmerizing voice and almost guru-like air certainly makes unforgettable how matters really stand today.

Listen to Dr. Helfand at YouTube at https://www.youtube.com/watch?v=uc2bKM0W7BU,  or listen to the shorter talk at Tedx at http://www.icanw.org/campaign-news/tedx-can-we-prevent-nuclear-war/

In Part 2, Dr. Helfand of IPPNW describes courses of action, including ways to educate the public and influence policy-makers about the growing danger of nuclear war.