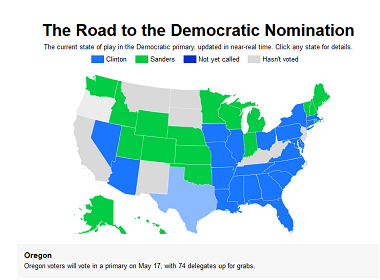 The President of Independent Voting, Jacqueline Salit, published an Open Letter to Sen. Bernie Sanders at the Huffington Post in late February. In “Bernie, We’re in a Bind,” Salit mentions many salient facts about today’s voters, facts which match up with public opinion polls on fed-up voters. For instance according to Rasmussen Reports:

The surprising level of support for Donald Trump and Bernie Sanders suggests voters in the two major parties are getting more extreme in their thinking than their respective party leaders.

There is a growing divide between voters and their elected leaders, and the rift has increased. Voter see their leaders as partiers, heavily influenced by their lobbyists and by peer pressure to conform with “what it takes” to remain in power. Congressional approval ratings have shrunken dramatically over the past eight years, and it is accompanied by a growing number of independent voters.

The surge behind Vermont Senator Bernie Sanders is inexplicable unless one takes into account the magnitude of discontent manifested in demonstrations such as Occupy Wall Street, Black Lives Matter, and countless other marches since 9-11.

Without any significant Wall Street monies, any significant Super-PAC, many of the splashy boardroom fundraisers or secret wheeling and dealing, but instead relying on volunteers, Sanders has magically captured a number of states and delegates.

After this week’s win in Indiana, here is how the Democratic map looks: With regard to the number of delegates, according to 2016 Election Central: The graphs show that Bernie Sanders has a surprising number of prime delegates, although Clinton leads by almost 300 delegates. It demonstrates that votes do not tell the whole story, but that money continues to buy influence.

A flagrant example of this is Democratic prime-time coverage in the mainstream media. Most of the major cable television stations focus largely on Trump and Clinton; Sanders is depicted as lagging far behind, with gross misrepresentations on the numbers of superdelegates Clinton has amassed. According to Tom in Paine:

Super delegates do not count towards anyone’s delegate total because they don’t actually exist and will never be cast unless an extraordinary set of circumstances arises at the convention circumstances that so far has only happened once before in the history of the Democratic Party.

Superdelegate counts psyche voters into thinking they should vote for Clinton since the Democratic nomination is all but decided. The Democratic National Party’s creation of this false impressions are forms of campaign dirty tricks and dishonesty.

There is no denying that unlimited SuperPAC formations have corrupted progressive nongovernmental organizations, since with a shrinking middle-class, many are now reliant on corporate handouts thinly disguised as foundation monies. Minority NGOs in particular early on caved into open support for Clinton, while either deliberately downplaying or keeping mum about Sanders “the Socialist.”

Nevertheless if there is one thing which the Senator is doing successfully, he is bringing out all the possible issues which the public should be discussing, for instance via his comprehensive proposals at BernieSanders.com or listening to the televised debates. Apparently many young people are listening, as his campaign has spread by word of mouth, via electronic devices, and social networks.

This is why Independent Voting President Jacqueline Salit wants to keep up the momentum. She points out how many independents and even Republicans are crossing lines to vote for Bernie, which is how he manages to win nominations in states without actually winning among the Democrats.

Salit believes the time is ripe to end the domination of the country by special interests, but that to enact systemic change, we need all the independent voters, who now number over 40% of the electorate, a growing trend since 2011 according to Gallup Polls. And this constitutes the bind:

Bernie’s popularity is transcending party affiliations, transcending the color lines, and class divides, but what will happen with all that energy and enthusiasm if he is not the Democratic nominee? Salit goes on to describe her bind, which is how to grow her progressive wing of the independent movement, to empower her followers with the catalyst and heroism of a new political revolution. She invites Sanders to go beyond his bind of being trapped in a rigged party system, to help her bind which is trying to support a democratic moral rejuvenation in America.

Bernie, we’re both in a bind. You need the support of independents to succeed. We are giving it freely. We need your support for a true democratization of American politics. Can you play that role? Can we find a way out of this bind?

Jacqueline Salit, a woman of many talents is also a playwright of Votes which is now showing at the Off-Broadway Castillo theatre in New York City through May 22nd. Her Open Letter reminds us that there are many grassroots activists and past presidential nominees watching this election closely, because of the rising left-right popular convergence on so many issues, including climate change, resource depletion, energy wars, corporatism, not to mention nuclear disarmament.