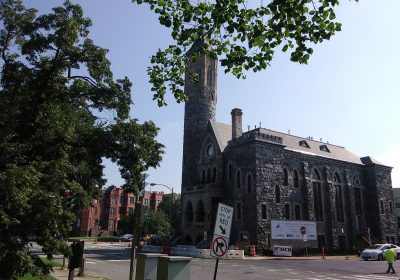 On mornings when it is still dark outside, the lights are on inside a humble brick building that might be mistaken for an old brewery. However the light is on in the front office. Along the side of the building are red railings for forming standing lines outside.

This is So Others Might Eat, Washington’s oldest interfaith organization that has been helping and is continuing to feed the homeless since 1970. Today its services include medical, emergency housing, rehabilitation treatment, and even showers. What if someone sold S.O.M.E. just so SOME-body could get $rich?

Inside the waiting room it is crowded with indigent people hoping they will receive a hot breakfast. It’s worth the wait. When you are ushered in, there are long tables and benches with place settings. People can really receive a hot breakfast here, listen to cool music, and glimpse cheery students volunteering, for instance, who attend Catholic University.

However increasingly the poor of D.C. are being effectively told to move away. When it is not due to 150% rent hikes, it may be because their older apartment building has been sold. More than just poorly maintained community housing units are being sold. Now they include an increasing number of historic churches. Many churches cannot withstand the pressures of a shrinking aging congregation, especially if members are earning less because they have had to relocate, change jobs, and now live outside the district.

Financial pressures buffet the area churches when, for instance, police start issuing tickets for double-parking. Or when a church cannot undertake expensive roof repairs. In the case of a local community church, a decision may be made by its regional governing body to shutter its doors and sell off the property. However in Washington, D.C., when a historic church built by predominately African-Americans closes, the event is noticed because it is an incalculable loss. Priceless memories are connected with a myriad events that will never recur within that domain. For Asian immigrants, also, the church is a place to reconstitute family and cultural identity. For the bereaved, churches offer a place to recover and make new friends. For those who had been historically oppressed, it was a place to devise new ways for civic and economic inclusion. A certain alchemy transcends the norm when it is a spiritual community, one that helps cement deep ties unifying place in time.

In contrast when that historic church is bought and sold, then converted into high-end luxury homes, those conversations tend to be broken off or shattered.

A flagrant example of commerce taken to the extreme is the conversion of historic Eastern Presbyterian Church on Maryland Avenue (the late Imani Temple). Located a few blocks east of the Supreme Court, the unusual bluestone was designed by noted Washington architect Appleton P. Clark, Jr. and opened in 1893. Its construction cost was $77,000. Today that is worth approximately $2.1 million dollars when adjusted for price inflation. According to property records, the improved land and property is now valued at over $2.8 million dollars. According to DC Urban Turf, recently the church was renovated into six luxury condominiums, each being sold for between $2.4 to $2.8 million dollars. That is a six-fold increase of the value of the assessment, but the church property was sold in 2014 for approximately $5.8 million dollars to Stanton Park Development. The official owner is Morningstar Community Development, LLC, while the primary real estate brokers are from Sotheby’s International Realty. When the units are sold, the revenue will be over $15 million dollars, which is about 250% markup. No wonder developers eyes are glazing over church steeples, and infecting more than just church-goers with what old-timers might term “flipping lust.”

This isn’t the first time that Eastern Presbyterian Church changed hands. While the church grew under the leadership of Reverend Maxwell Cornelius, and flourished under other pastors, in the 1930s, the development of the automobile caused membership to taper off as wealthy families moved away. At the same time, a migration from the Deep South was occurring, and more African-Americans were moving into Northern cities. Following World War II, membership also declined in a number of city churches due to young white families moving to the suburbs. In 1955, Eastern Presbyterian Church merged with nearby Metropolitan Presbyterian Church. The property was sold to Mount Zion Baptist Church which held on for almost forty years, until 1994. After this, the African American Catholic Congregation, also known as Imani Temple, took up residence, but after 18 years, put up a notice of sale. According to the Hill Rag, circa 2012, Imani Temple’s leadership and community struggled with the idea of who to sell it to, although with the price tag of $5.8 million dollars, not many in the nonprofit constituency could afford it. For instance, one proposal for conversion into a “civics-focused college-preparatory charter school” did not sit well with neighborhood residents of ANC 6C. But in late 2014, Morningstar Community Development, LLC, working with contractor MCN Build which has renovated a number of D.C. charter schools, seemed to have a palatable proposal for neighborhood residents.

The renovated church is being marketed primarily by Sotheby’s International Realty as The Bell Tower at Stanton Park. The church, once a keystone anchor for the neighborhood block with its 130 foot-tall Romanesque-Revival tower will now be a privatized “lighthouse on the Hill.” All the high-end luxury to be expected are included such as personal elevator, hardwood floors, marble bathrooms, fireplaces, and turreted views of Capitol Hill. However selected residents will also share the unique bell tower, dramatic ceiling heights, private wine cellars, restored original stained glass windows, central heating and cooling, all with LEED silver-rated green building certification. Redone exterior makes it look more like homes inside a castle

The location is praised as an impressive building dominating an important intersection, as having standout features, and a short jaunt whether to the Supreme Court, Capitol Building, or Library of Congress. Since the neighborhood demographics indicate that the area mostly consists of young urban professionals whose homes are also valued in the million dollar range, it is a matter of finding the right type of wealthy resident whom such luxury might appeal to. For instance, it might appeal to defense company executives looking for a penthouse suite, Supreme Court justice looking for a third home, or strategic lobbyists wanting closer access. The monthly lease price calculated by Realtor.com is up to the $15,000 range—not a price many can afford.

Setting aside the sharing considerations of modest multi-floor space totaling less than 2800 square feet, the condominiums are a sweet surprise for those who want to experience a Hearst castle-style luxury living. After all, this is not your architect Julia Morgan designed Spanish church replica: it’s a genuine church conversion. Indeed architect Appleton P. Clark reputedly attempted to compare his masterpiece replete with its crenelations with the St. Patrick’s Roman Catholic Church in his History of Architecture in Washington. However the recent sandblasting has changed the Potomac blue-stone to resemble more fashionable Latrobe sandstone.

And let’s not forget that today the St. Patrick’s Catholic Church near Chinatown is the home of Catholic Charities which invests in inspiring hope and building futures for everyone who comes to them in need “regardless of social, economic or religious background.” Indeed the contrast with the decorative photos showing at TTR Sotheby’s do not look too heterodox. Statue of homeless sleeping on bench outside St Patrick’s Cathedral

The trend of church conversions has caught fire throughout the area because there has been a noticeable decline in regular church attendance especially among the newcomers. Parking tickets can be the final straw on the camel’s back when it comes to church finances. Developers are even boasting at how they have made inroads into this new market. Based on the report at the Washington Post, this new kind of steeple-chasing is one that makes even regular church goers gaze worryingly at which bell-tower is next to be flipped. According to the Post writer Amanda Abrams:

“After all, a church is the repository of members’ deep emotions and most important moments, often generations’ worth, and that means deals often are not just strictly business. In some cases, developers partner with church leaders or agree to price a percentage of residential units affordably to align with churches’ missions.”

While millennials may glibly compare what churches provide with social services, there is no replacement for the loving kindness of soulful volunteers, those who counsel and connect newcomers with friends and neighbors, and the variety of events that churches offer. In contrast, public agencies are usually closed on weekends and the workers often share more materialist perspectives, as opposed to habitually trying to do more even when there is a whole lot less.

Today evangelical-connected nonprofits are also drawing attention to the plight of those suffering houselessness. For instance, Bread for the City‘s recent blog post is a close-up of Michael Blue, a native Washingtonian who has lived in Logan Circle with his wife, who is disabled, for the past two decades. In August he was given notice that the owner is selling the building. The tenants can stay in their apartments if they can afford to buy it for $2.5 million dollars. Blue, who volunteers and is a member of the board for Bread for the City, now knows how it feels to be homeless.

“I would ask them to walk in my shoes and the people like me. I’d like them to have some family that are in this situation so they could see how it feels. They really need to keep in mind that they are honestly and truly public servants — and they need not neglect this part of the public.“

This was Michael Blue’s plea to public officials who have helped gentrify at least 54 neighborhoods or 52% of D.C.’s eligible tracts since 2000. Despite a new kind of gentrified blight popping up along certain revitalized corridors such as along Georgia Avenue and at Columbia Heights, the District has no plans to decelerate community redevelopment any time soon.