Hawaii legislation and homelessness: the good, the bad, the ugly 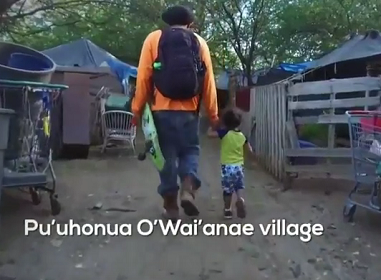 The State of Hawaii is paradise, if you have money to spend. The population of the state in 2017 was 1,427,538 people, but it is decreasing at the rate of 3 people per day. This is after accounting for births and new move-ins.

Over a five year period an estimated 37,000 people have left, mostly for the mainland.

Most state officials concede that for the working class, the costs of living are high, and that gentrification has increased rather than decreased costs. One official told BBC Our World that it has become the norm for low-wage Hawaiians to work at least two jobs. Many lower working class are often only a paycheck away from homelessness.

In fact, the counts of the homeless vary from a low of 7500 people to much higher. Stephanie Lum reports in “Homeless in Hawaii” that “Hawaii has more homeless people per capita than any other state”:

Crackdowns on the homeless in some neighborhoods push them and their families into fewer encampments, which exploded in size and visibility.

In Oahu, Jason Hang with the Institute for Human Services (IHS) expressed surprise by the numbers dwelling out in the brush along a Molokai lagoon. Hang said he had heard about them, but never seen them.

A nonprofit which helps provide them services explains their alternative community choice:

Because it’s isolated, they feel that they’re safer, away from the police, and those that are trying to force them into a living situation that they’re not comfortable or want to be a part of.

Unfortunately tent encampments tend to scare off potential business customers or detract from the aesthetics of the park view. As on the mainland, homeless encampments are subject to removal or relocation often on very short notice.

The nature of encampments in Hawaii is complicated by the number of natives—one-third are Hawaiian aborigines—who feel that the land is part of their heritage. Twinkle Borge of Pu’uhonua O’Wai’anae village, Hawaii’s oldest and largest homeless community expressed:

How come the Hawaiians is struggling here, when this is our land, you know? You came here, you took our land from us, and left us, like that. Kimo Carvalho, IHS Development Manager, says that they are working with the state to provide homeless people more shelters.

They have to want that choice, and we have to offer them every single solution to getting there.

Several Hawaiian legislators have come up with innovative ways to help the working class, perhaps in the hopes of slowing the downward mobile trend.

Hawaii Senator Josh Green, a medical doctor, told BBC that “a new model” is needed when homeless patients return to the hospital emergency rooms nearly every two weeks. Dr. Green’s model would include a hybrid program that will “treat homelessness as a medical condition.” Presumably, that will allow for housing for the homeless to be paid for by federal funds. It can be a game-changer—provided there are no proposed cuts to Medicaid or HUD—obviously the Senator doesn’t want things to become worse.

Significantly, a family member who is providing care for an elderly dependent is eligible for receiving compensation of up to $70 per day. National organizations such as American Association of Retired Persons (AARP), and Caring Across Generations (CAG) hailed the bill as a breakthrough. According to Caring Across Generations (CAG) which aspires to improve the quality of homecare programs in America:

Not only is this investment going to make the daily lives of family caregivers in Hawaii better, it also is an inspiring step forward in addressing the economic penalties of the 44 million family caregivers across the country can incur, especially for women who take on this role. For example, 33% of working female caregivers decrease work hours, 29% pass up job promotions, trainings or assignments, 20% switch from fulltime to part-time employment, 16% quit their jobs, and 13% retire early due to caregiving responsibilities. Having the ability to get help on a daily basis will provide many women (and caregiving men!) with the support they need to build their careers at the same time they can provide the quality of care that family members are so well-equipped to offer.

CAG believes the program models pro-family values such as compassion and equity, and can help offset proposed Medicaid budget cuts.

Great plan (“bad” because no timeline or funding yet)

Last summer state legislator Chris Lee sponsored a bill (HCR 89) calling for a Universal Basic Income (UBI). It passed the Hawaiian State Legislature unanimously last June, however no word has been heard about its implementation.

Rep. Lee drew his inspiration for the bill from the fact that not only is the homeless population growing, but it will continue to grow due to the trends towards globalization and automation technologies. More than anything else, HCR 89 opens up the discussion.

As emphasized in the bill itself, civilized society should prepare for a time when up to half of today’s jobs will become automated. Human workers will eventually be replaced by self-help checkout stands, driverless cars, windowless shopping malls, smart medical phones, robot life guards, and even e-lawyers unless we halt the investment trend.

The biggest way to think about this is that right now you have all these major industries that are automating resources… If instead a portion of that additional revenue was used to give back to the people––because robots took their jobs––the company still earns a massive profit, but now there’s an actual revenue stream to support the people left unemployed.

According to Spotlight on Poverty and Opportunity “the Hawaii government is far from issuing checks to its own one million plus residents; Lee says it could be years before a bill endorsing basic income is introduced to the state legislature.”

Lee shared his ideas with a discussion group on Reddit.com including:

HCR 89 also establishes a Basic Economic Security Working Group co-chaired by the Department of Labor and Department of Business, Economic Development and Tourism to analyze our state’s economy, and find ways to ensure all families have basic financial security, including an evaluation of different forms of a full or partial universal basic income. The group will eventually be reporting back to the State Legislature with further recommendations and next steps.

The working group at this point tentatively includes members of the State legislature, Hawaii state Department of Business, Economic Development and Tourism, Hawaii state Department of Labor and Industrial Relations, Chamber of Commerce Hawaii, local unions such as AFL-CIO, and University of Hawaii, and membership is open-ended right now. It is tasked with objectives such as assessing the future job market, estimating social safety net program costs, analyzing the cost and feasibility of UBI, and reporting its findings to the Hawaii legislature.

As debates continue, the dramatic divide between rich and poor is now being given a strange new twist by the Hawaii Legislature. A hearing is set for debate on medically-assisted suicide. According to Hawaii News Now on February 27th, the ‘death with dignity” bill will be discussed at a joint committee hearing. Will this be the year that Hawaii House Bill 2739 ‘Our Care, Our Choice’ passes, legitimizing euthanasia?

And, how does this give the homeless and invalids something new to worry about? AGN:

What is to prevent the hospital personnel from confuting the demands of an intoxicated homeless person with those of someone wanting assisted suicide? Who will ensure that doctors, increasingly burdened by pressure and college loans, will not be lobbied to become secret death-with-dignity doctors?

To summarize, homelessness is a real social malaise, but to ignore or dismiss it only makes the problem worse. There are ways to tackle homelessness humanely and to sensitively address underlying issues. The state of Hawaii is definitely trying to progressively alleviate the problem, including planning more housing and new legislation.

In closing, AGN finds it helpful to share these snippets from “Homeless in Hawaii” commentators as the people in Waianae Harbor homeless encampment are now faced with eviction: