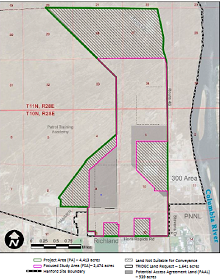 In Part 1 of this report the history of Hanford and the legislation supporting a new National Park, with sections of it slated for privatization are described. In Part 2, the issue with toxic pollutants entering groundwater, along with other objections are covered.

Among the most obvious of concerns is that the land transfer in the 300 Area of Hanford (SE corner along the River) was historically associated with nuclear experimental research labs–and it continues to be under contract with private labs and Energy Northwest. Many different types of uranium fuel rods were developed, furnished, and transported not only to the nine nuclear reactors at Hanford, but also to nuclear plants around the country, such as Oakridge, Tennessee.

Disposal methods included open trench, underground vaults, and “natural attenuation”; in effect using the River to dilute wastes that have leached in from nearby ponds and ditches.

While various contractor corporations have recently excavated, demolished, and transported hazardous wastes to new landfills, such as the Environmental Restoration Disposal Facility, the 300 Area remains a patchwork of contamination. Of concern especially is the long-term plan by Energy and TRIDEC is to transform the River corridor into useful privatized zones for industrial, commercial, and even eventually residential development.

In June 2015, the Hanford Advisory Board presented what lay ahead after Cleanup in its Vision of Hanford Reach National Monument including:

Energy’s vision of Hanford Cleanup appears to confute clean with buried and greenwashed. The primary concerns are Uranium releases in the 300 Area CERCLA Proposed Plan[4]:

For all practical purposes, the Tri-Party Agreement supports the idea that mechanized removal or burial constitutes cleanup; that the primary toxic element to treat is uranium-related, but that toxic uranium in trace amounts shouldn’t be a concern because far more uranium leaches into the River from agricultural lands. In fact, where the monitoring wells are placed or deactivated, there may be a potential for data manipulation and presenting more “favorable” clean up findings, according to Dr. Pete Willing with the NRDC.

Toxic waste travels by air, through the ecological food chain, in water and soil far beyond the boundaries of Hanford; the types of waste present include identified radioactive wastes and chemicals used in processing and construction, and unidentified byproducts formed through disposal reactions. Many maps depict plumes of groundwater slowly but steadily migrating from other parts of Hanford towards the River, where the groundwater elevations generally slopes east and also towards the SE 300 Area of Hanford.

More uranium does leach from agricultural lands than from Hanford; however, fertilizers with uranium from mined phosphate are not milled or enriched. At Hanford, highly enriched uranium was and continues to be used extensively in nuclear reactors. Deadly plutonium was purposely produced for nuclear weapons manufacturing resulting in huge stockpiles.

According to NIRS in report: “Radiation: The Myth of the Millirem”[5] :

A single alpha particle, acting on a single cell, may damage that cell to the same degree as if a thousand x-rays had hit it. That is, one radiation particle can cause great damage to a single cell; that damage can even lead to a person’s death, while registering a dose to the total body of zero!

Energy reports that a variety of chemicals (uranium, tritium, strontium-90, carbon tetrachloride, chromium, cyanide, iodine-129, nitrate, trichlorethene) are present in groundwater, but its significance is downplayed, including in the soil where there are many other contaminants.

Out of five remedial alternatives for treating contaminated groundwater, Energy favors Alternative 3a, “Enhanced Attenuation” Focused 3 Acre U sequestration, MNA for tritium & organics, and GW Monitoring for U & nitrate plumes.[4] In other words, for the 300 Area, Energy favors a plan of limited treatment for uranium using phosphate sequestration and monitored natural attenuation (MNA) for other chemicals polluting the groundwater (GW).

According to Columbia Riverkeeper[6]:

‘Monitored natural attenuation’ relies on natural processes, such as dilution, and radioactive decay, to decrease concentrations of contaminants. At the southern Hanford riverbank, pollutants will be left in the ground and allowed to migrate towards the groundwater and the Columbia River where they will be diluted. Basically, [it] is a ‘do nothing’ approach that allows chemicals and radionuclides to flush into the Columbia River over time.

In fact, below is a floodplain map from the Tank Closure and Waste Management Environmental Impact Statement for the Hanford Site, Richland, Washington (TC & WM EIS) report taken from Chapter 3 Affected Environment report showing how the Focus Study Area for Land Conveyance (circled in brown) has flood prone zones. This means that river water intrusion into the groundwater aquifers is a factor whether during floods, upstream dam failure, seasonal tidal differences, or embankment erosion. Although TRIDEC maintains that this is historically the way land has been transferred between the federal government to Richland, concerned parties disagree.

The Oregon Department of Energy expressed concerns with additional uranium mobilization due to runoff infiltration from developed areas including into the groundwater.

The Umatilla and Yakama Indian tribes expressed concern with the bypassing of thorough environmental impacts and the “side-stepping of national laws and policies including, but not limited to, radiological clearances.” Both tribes expressed the desire for the government to either honor its past historic Indian treaties or to follow the standard process for allowing other federal agencies to bid on disposal real property. They mention that the 300 Area lies “within the potential path for migrating groundwater from the conveyance lands.”

The Yakama Nation whose lands are adjacent to Hanford site expressed disagreement over the adequacy of the Environmental Assessment (EA) with regard to cultural, natural, wildlife, historic, plants, and archeological resources. Both confederated tribes of the Umatilla and Yakama Nation expressed indignance over Section 3081 Ensuring Public Access to the Summit of Rattlesnake Mountain in the Hanford Reach National Monument.[7]

Yakama Nation is even more strongly opposed to this amendment. “Laliik” (our named for Rattlesnake Mountain) is a sacred mountain to the Yakama People and promoting public access–including motorized access–would constitute an adverse effect to the spiritual quality of the Mountain and the character defining features that make it eligible as a Traditional Cultural Property under the National Historic Preservation Act. Senators, Laliik is our Mount Sinai. This is where Smohalla, our most revered prophet and teacher set forth teachings and practices that are followed to this day. When our Long House leaders feel that a young adult is ready and worthy, Laliik is where they are sent to fast and to have vision quests. This is not a place for Airstreams and Winnebegos.

The Nez Perce tribe and Wanapum tribe also filed letters expressing concerns such as impacts to and changes in access to the River. Audubon Society questioned why the land could not be leased in keeping with an entire national monument under federal environmental management.

Columbia Riverkeeper, a citizen group dedicated to protecting and restoring the Columbia River since 1989 voiced their concerns in support of a “clean-up first” approach at Hanford to “protect the Columbia River and the economic and ecological health of downstream communities”[8]:

Cleaning up Hanford’s radioactive legacy is a monumental task, and only about one-third complete. Until the entire Hanford Site is clean and safe, the U.S. government should not engage in side-projects that detract from Energy’s conservation and restoration mandate.

Riverkeeper raised concerns that “the most contaminated site in the Western Hemisphere” is about to become more contaminated by new industrial and energy developments in the 300 Area, but that this jurisdiction will no longer be subject to stringent federal laws. This is supported in the Energy Final EA in Section 5.5.1. Furthermore in a report prepared in 2013, “Private Industry on Hanford Land,” Riverkeeper revealed:

TRIDEC envisions a clean energy park that is much larger than the 1,641-acre parcel currently at issue. TRIDEC’s request for 1,641 acres stated that this is merely the first of many parcels of federal land at Hanford that TRIDEC hopes to acquire. Documents obtained via public records requests are replete with statements indicating that TRIDEC and the cooperating municipalities want more land…

How much more federal land is unclear, but this paper, and TRIDEC documents posted online confirm that TRIDEC along with the City of Richland, the Port of Benton and Benton County have invested in economic studies on various possibilities for attracting investment as a “clean energy” park partnering with AREVA, and another foreign-owned company, creating a megasite that would help anchor and grow the industrial zone, and create many new jobs.[9]

Worker health and safety in the face of ongoing waste contaminants are a focus for citizen groups such as Hanford Challenge which filed a letter stating their reservations on the Hanford Land Conveyance. Challenge’s definition of clean energy is energy which is renewable, and this would include solar and wind energy generation, but not small modular reactors because “there is still no solution for the cost, safety, and waste problems of nuclear power.“[10]

As Columbia Riverkeeper told AGN in an email:

The process DOE failed to draw on regional and national perspectives on the future of Hanford. Every American has invested in Hanford’s cleanup, and the process for Hanford’s future should be inclusive and comprehensive.[11]

The Final Environmental Assessment, Finding of No Significant Impact, and Mitigation Action Plan for the Proposed Conveyance of Land at the Hanford Site, Richland, Washington were all finalized in September 2015. A recent article was published about it in the Tri-City Herald.[12]

Hanford Land Conveyance is an example of how public business is increasingly conducted under the table; public citizens appear to have little recourse when arguments such as economic benefit and job-creation are used to flummox public debate centered around clean up of Hanford Reach and restoring the Columbia River for future generations.