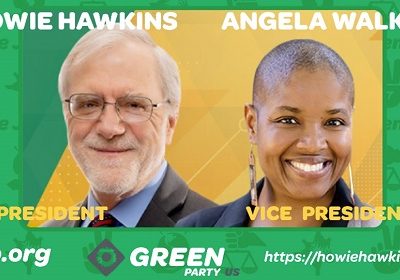 “A retired Teamster, Howie Hawkins is the original Green New Dealer, the first US candidate to campaign for a Green New Deal in 2010.”

This is a mighty claim backed up by a detailed proposal, The Green New Deal, which has been studied, adapted, and improved over the years as a foundational charter specifically by the Green Party USA. It is the signature policy proposal which, thanks to Dr. Jill Stein, a strong backer of the People’s Climate March, is brought to the fore among progressive Democrats.

But the Green New Deal blueprint which the Democratic Party has appropriated for itself is still substantively different from that proposed by the Green Party. Their plan will generally be much more expensive, decades slower, and is constrained by the plutocrats who own corporations which do not want to switch to carbon-free—at least any time soon. The basic difference is that Green Party envisions its original Green New Deal will pay for itself, while the Democratic Party’s Plan will increase the national debt. According to a comparison chart from the GP.org, the biggest reason why it can pay for itself is because the money is transferred directly from military spending to implement a Green New Deal at warp speed by reducing defense spending by at least 50%, maybe up to 75%. The timeline and investment is key to a successful implementation that will train and provide whole new workforces—over 30 million jobs, plus guaranteed job or basic income for all Americans who want to work.

The warp speed Hawkins refers to as a wartime-mobilization effort, includes authorizations such as the Defense Production Act used to spur upcycling-style manufacturing, will allow the U.S. to meet the Paris Climate Accord, such as 100% renewable energy by 2030, and elimination of fossil fuels by 2030. In contrast, the Democrats’ plan only provides for a mix of cleaner energy sources, meaning that dependency on high-emissions manufacturing sources such as natural gas or nuclear may remain in use until at least 2050, potentially missing critical targets in emission reductions and slower temperature increases.

Specialists within the Green Party have written books and presented at science conferences on how to successfully implement solar and wind while helping the U.S. to maintain its entrepreneurial edge, countering claims that the Green Party is socialist, but instead “eco-socialist.” They point to countries in Europe, such as Britain, Spain, and Germany, and to the Far East, such as Japan, China, and India, which have already implemented far-reaching plans for developing sophisticated rail systems, independent solar farms or off-grid townships.

At the first Eco-socialism Conference on September 19, 2019, Hawkins explains the term “eco-socialism” in his talk, “Versions of a Green New Deal” [as heard]:

“It goes back to centralized state control versus federalist administration. We want a bottom-up movement. We don’t want an authoritarian movement. We want a new state with more people power, more federalist. For example, the rail system is a nationalized system of enterprise. It will be labor-controlled. The Green New Deal will be built out, and then leased out to work in as cooperatives, so within the framework there will be entrepreneurship. What we don’t want to do is have a lack of clear communication that engenders the kind of capitalism we have right now…”

These possibilities have worked in many different countries and from manufacturing, to farming, and health care. It would not be the variant we have now, such as a tendency for building out technocratic bureaucracies that become infested with sinecures and nepotism. In the bottom-up type of Mondragon-cooperative described by author-lecturer Richard Wolff, workers united will never be defeated, and can offer the critical checks and balances needed to deter top-down greed and corruption.

In fact, Howard Hawkins, along with V.P. candidate Angela Walker have gained endorsements from U.S. national socialist party organizations for 2020, a unique accomplishment. Socialist Alternative, Socialist Party USA, Workers Liberty, Independent Socialist Group, and various state chapters have offered endorsements. Perhaps at heart, principles such as full employment, cultural freedom, and ecological harmony go back to the U.S. Constitution stating our rights to “a life of freedom, liberty, and the pursuit of happiness” contradict the present populist President’s who is walking us down the primrose staircase of police-state authoritarianism.

Walker and Hawkins also believe this connects to transformative 21st century living. As Hawkins explains with regard to a question about our culture of efficiency [as heard]:

“We need an economy based more on use-value than on exchange-value. Under use-value GDP [gross domestic product] may shrink, but quality of life will increase. As for 5G—we should use a precautionary principle. We should not go ahead till we know if its safe. After we build this out, for example, solar panels, we don’t have to buy fuel all the time. We build the infrastructure, and then we can just work on maintaining it. And we have more free time; we need a fair distribution of work and income. Everyone should have access to productive work, and income for living life.”

This is radically different from the current trend towards ending unions, curtailing hiring people in traditional jobs with benefits, and privatizing the public commons, which may continue apace even under the Democratic President, Joe Biden. The Democratic proposed Green New Deal does not stipulate controls on for-profit energy sectors that support energy deregulation and oil dependency. The Democratic proposed Green New Deal will not end the military complex and financial incentive for war unchallenged. However Hawkins does concede from a moral-high-ground perspective that the Greens take this as an opportunity to educate and inspire advocates and politicians. “If we transform the way we produce, it will transform the way we consume,” he asserts.

Change does not come easily anymore in America. But the Green New Deal has become a Beacon on the Hill and it is remarkable, as a matter of fact, that even Democratic Presidential candidate Joe Biden has now included a version in his plan for the middle-class both in “Build Back Better” and in “The Biden Plan to Invest in Middle Class Competitiveness.” It is a radical vision for a somewhat middle-of-the-road Democrat, and even if it seems to be reaching for the moon, speaks well of including Progressive Democrats plans from Bernie Sanders, to Elizabeth Warren, to Congressional Representative Alexandria Ocasio-Cortez, to even independent Democrat Andrew Yang.

The COVID-19 pandemic has dashed the hopes for a full, timely, economic recovery, but the Green Party has furnished the playbook pretty much in its original form, for the public to read and understand what is at stake. We don’t need a Hollywood movie to understand the frightening calamities unleashed by the forces of flooding, fire, hurricanes, receding coastlines, drought, or water table and farmland elevations sinking by the year. It is more than a question of whether or not voting third-party is a throwaway vote, when in fact, these parties play a critical role in holding politicians to the line.

Green Party 2020 presidential team, Howie Hawkins/Angela Walker believe that this is not purely political pragmatism, but also a vote “based on principles.” In the end, you should “vote based on your conscience.” The Green Party has obtained ballot-line access in 30 states (including Washington, DC, and Guam), and will be write-in for 17 other states.

Find out where the campaign is headed this week @ https://howiehawkins.us/news/