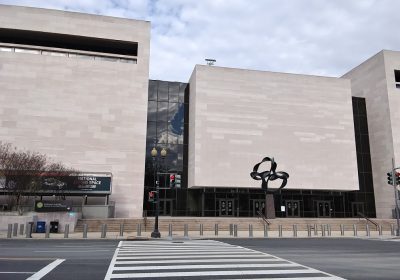 WASHINGTON—Since the government shut down began a couple days before Christmas in December 2018, a segment of President Trump supporters have been rejoicing over the shutdown. This is because security contractors, such as Booz-Allen-Hamilton, who hold huge contracts funded by the Pentagon, are relatively immune. Workers at the Department of Homeland Security, National Security Agency, Federal Bureau of Investigation, and Department of Defense are mostly not forced to stay home or work without pay.
The impact of the shutdown and the implications are less easy to miss for those who are walking along the streets of Washington, D.C.
The most noticeable impact is on tour buses and operators due to Smithsonian Museum closures. Normally tour buses from New York City park alongside Independence Avenue at the National Mall. Crowds of tourists will line up at opening at the National Air and Space Museum, the National Museum of American History, and the National Museum of African-American History and Culture. Today the Mall is relatively empty; even the tents and refreshment stands are shut down. Vendor trucks are also reduced by 80%. Usually lunch food trucks arrive by 11am every weekday morning hoping to attract workers whether at L’Enfant Plaza or near Judiciary Square. Today very few are seen, because business is extra slow. No ice-cream trucks or hotdog stands for hungry families and their wide-eyed children.
All this, the public is told, is by law because of the impasse over whether or not a border wall between the United States and Mexico should be paid for.
Tourists who planned their vacation long in advance of the shutdown are visibly unhappy as they search through their smartphones to find what is open. They will discover that even the Spy Museum has closed in anticipation of its springtime re-opening. However because of loopholes in the legislative budget, the Capitol Building is still open to the public, and so is the Library of Congress. Instead of a day at the National Zoo, which is also closed down, tourists may opt to spend the day at Kennedy Center, which is still open.
The irony of the Trump government shutdown is that its deeper, reverberating effects are blithely ignored in favor of the headlines. The effect on the Treasury Department must be noticeable when workers are not there to process checks or to staff the Internal Revenue Service. In January is when the I.R.S. begins to gear up in hiring extra temporaries for the annual April 15th tax return date. Even two weeks of shutdown impacts the speed at which new employees can be hired. The grand irony is the fact that the Republican base appeals to small business owners and entrepreneurs—exactly who might be impacted most by a government shutdown—from private accountants to buskers.
Everywhere else, from the Environmental Protection Agency, to Housing and Urban Development, to Department of Labor, and Department of Education, workers will deal with a backlog of emails, paperwork, applications, and reviews whenever the shutdown officially ends. To complicate matters, over the course of the past two years, there has been instability due to the controversial hirings and firings of agency directors. For instance, the latest resignation at the Department of Interior is businessman and former Navy SEAL Ryan Zinke; before this Dr. Tom Price, Secretary of Health and Human Services was forced to resign. High profile turnover and personnel of departments currently under siege include former Secretary of State Rex Tillerson and the State Department; and anti-EPA activist Scott Pruitt as the former Head of the Environmental Protection Agency, and the EPA itself.
President Trump has also challenged employees to taking secret oaths of loyalty—the most notable case being the firing of former F.B.I. Director James Comey in May 2017 including for refusal to take the Trump personal loyalty oath. However Trump’s demand for a personal oath does not have to be undertaken in person. In countries where the cult of personality rules, all that is needed are key authoritarians. Whether within the office or outside, via media or in person, agents are trained or understand how to exert social dominance to force the rest to conform and obey.
Federal agency directors and political appointees such as Secretaries are supposed to be loyal to their department, to the mission of that department, and the wider public they represent. However lately it appears that directors and appointees appear to have private interests, whether individual or corporations, at heart. Trump’s targeting of employees based on loyalty could in fact be viewed as illegal since Trump is himself a corporate citizen, first and foremost. If this were not the case, he would have willingly foregone any corporate earnings from holding office simultaneously; however, so far he has not handed over any such earnings to the federal government.
Wider impacts are being felt throughout the Washington metropolitan region from reduced tourism, reduced federal employee workers’ spending, reduced income spent on public or private transportation, hotel or booking cancellations, not to mention the reputation of the nation itself. Many area residents are already reporting delays in food vouchers, delays in government services, and charities are cutting back wherever they can. Affected businesses may also include grocery stores, cafes, personal services, gas stations, rental services, banks, and domestic workers.
A continued shutdown will have wider impacts for those most reliant on government benefits such as veterans, children, disabled people, and seniors. Low income college students who are reliant on federal loan assistance and grants to pay for tuition and other expenses must now be prepared to pay for everything themselves.