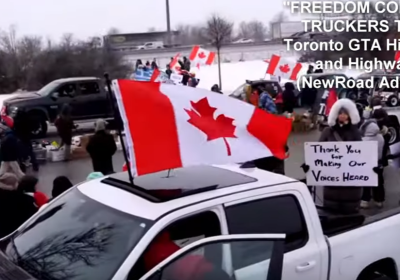 The longest truck convoy in human history has amassed in Canada since January 28th. The #FreedomConvoy saga began three weeks ago in January and headed mostly to Ottowa, Canada, the nation’s capital. Truckers planned for months how to respond to a growing list of stipulations. This would include longer hours between rest breaks, higher fuel prices, lower pay, carbon taxes, and less parts availability due to the Covid lockdowns.

The mandate to enforce rounds of vaccines and Covid passports to travel back and forth across the U.S. border was the last straw. Since late last year, various unionized truck drivers have lost their jobs, and there are negative impacts on the trucking economy from service stations to roadside diners, and including two years of global lockdowns.

Many who have lived near the Canadian border, including AGN, recall the days when nothing more was needed than a valid drivers license for an idyllic day excursion. Those days are fast coming to an end, for the inspections are increasingly complicated when the trucker has his wife by his side, and maybe children in the back, all of whom will be questioned and have their passports subject to inspection. What is awe-inspiring is that millions of people are now involved, not just tens of thousands of truckers, but extended families, friends, and peers. Independent media is releasing montages of hours of videotaping of huge throngs of people peacefully assembling in Ottowa, bravely putting up with freezing snow and biting winds, standing on overpasses along the highway in Toronto holding signs and waving, miles of cars and people parked along the highways across Canada greeting truckers with cheers and supplies.

The phenomenon is truly astonishing, something one would never expect from the low-key, amiable Canadians, this kind of grit and determination. Nevertheless, the mindset of those in power is so narrow that they no longer appreciate the human comedy whatsoever. If one has a cough, it must be Covid, and that person is reduced to a PCR test and getting vaccinated. Stew Peters reports that various people are being turned away from hospitals if they are not vaccinated; for instance, if they are reporting from a car accident, they will be maltreated for a Covid-patient and even hooked up for intubation. No wonder more copy-cat convoys are being planned in U.K., United States, India, and Australia.

While the mainstream media has done nothing except attempt to portray the truckers as law-breakers and their demands as those of a fringe group, throughout 2021, especially in Europe there have been massive demonstrations against Covid mandates and business lockdowns. Why is everyone suddenly universally required to take rounds of vaccines, and at the cost of their livelihoods or being able to conduct business as usual? People are beginning to suspect a global plan to induce a Great Reset, and that leaders trained at the World Economic Forum’s Young Global Leaders School learn to implement the plan, including inculcating a medical dictatorship for a future that will include human micro-chipping, digital identification, digital currency, and an end to all human privacy. Already there are quarantine camps in Australia and Washington State, and house-arrests in Austria and elsewhere for the unvaccinated.

If the politicians were wise to their constituencies concerns, they would be eager to meet with the top organizers, but instead, the Prime Minister Justin Trudeau has basically hidden himself away, issuing a speech in late January rejecting any sort of recognition of the movement, and telling them to go home. Since February, some of the premiers of the provinces, such as Saskatchewan and Alberta, are proposing rolling back the mandates partially or in full. The truckers, who are elated over the worldwide attention (especially from broadcasts by independent news media over the internet), are not planning to decamp until their demands are met. They want a full end to all the mandates, and to prove they mean business, more truck blockades are being erected in Alberta and British Columbia near border crossings.

The full extent of the coordination and planning cannot be appreciated from a mere bird’s eye view, but the variety of small news outlets reporting on the #FreedomConvoy give a taste on the momentum that is unleashed around the country, and beginning to overlap with the United States. According to A&R Videos, which operates as a logistics hub for truckers, there are 20,000 truckers from America right now in Canada, and they have come from as far away as Texas and Florida. IrnieRacingNews is reporting live on the Okanagon blockade, filming the convoy heading south to the blockade at the border. ResistingtheReset provides report and analysis on how the revolution is gathering force, with people getting in their cars (no masks) to join. However there is no doubt the police are attempting a “surge and contain” strategy against what has become an “occupation” that is “promoting lawlessness and violence” including increasing the number of police and plainclothes detectives. In fact, A&R and RebelNews reports that the police have held a participatory stance, with red-vested police even serving as area ambassadors. Still,  billionaire-supported-and-influenced media continues to sow public distrust despite the free, inclusive, diverse number of protesters at the #FreedomConvoy events.

Vloggers, such as Ottowalks, BowlleuxMobile, Vidstorm, and Tireroaster’s Garage show that the huge demonstrations are indeed festive and including chanting, dancing, and free food. Traditionally it’s the time of year when people come to skate at the world’s longest ice-skating rink—the frozen canal running along Parliament Hill in Ottowa. Now there are even bouncy castles set up for toddlers to play inside, and small stoves to help people stay warm. In fact, amid the hundreds of thousands of additional visitors, it is amazing that there has been virtually no vandalism, and that the board of the #FreedomConvoy are not only fundraising for their own truckers, but have shared their food with the homeless, undertaken to protect the monuments (which were not defaced but draped with Canadian flags), are conducting their own patrols, and are even shoveling the sidewalks free of snow. Having brought wives and children to the capitol, many truckers have a vested interest in peace and stability, despite the sonorous musical honking going on all day, and sometime late into the night.

There are various trucker responses to the slander, such as by ET Transport, but the best is a press conference held by #FreedomConvoy board leaders on Friday February 4, 2022, broadcasted by PeoplesWorldWar.com, about the frustrations with the police and the hold up of $10 million dollars donated to the truckers at GoFundMe. To everyone’s frustration, GoFundMe came to the determination “following a review of relevant facts and multiple discussions with local law enforcement and city officials” that “this fundraiser is now in violation of our Terms of Service (Term 8, which prohibits the promotion of violence and harassment) and has been removed from the platform.” For truckers who are sacrificing alot to be at the forefront of the Guinness World Record in convoys, one spanning 50 miles long at some points, these funds would have helped them bridge the gap in working income.

One thing is for certain, for once, blue-collar workers are at the forefront of standing up to the world’s elite with their covert agenda of transhumanism. While doctors are present on stage in Ottowa, and speaking out against the mandates, they have not been able to amass any protest of this magnitude and duration. The government with their bureaucrats would love to starve and cripple the movement, however, as of right now, the throngs are too great and too many people are able to think and reason independently in Canada. Big corporation-supporting media is distressed at being shown up by people they have long labeled as illiterate, unskilled, and even racist. In contrast, everything about the nationwide convoy demonstrates coordination, technical autodidacticism, logistical talent, and deep values such as putting the love of family and community first over blind obedience. The music-making, folk-songs, stories, and radio information are all part of trucker culture, as free and independent a profession as farmers, who are now also planning to join the convoy working to defend human biological liberty.

“Thank You, Truckers” Montage by Tribute to Canada