Fork in the road: Improve or Replace ACA, Part 1 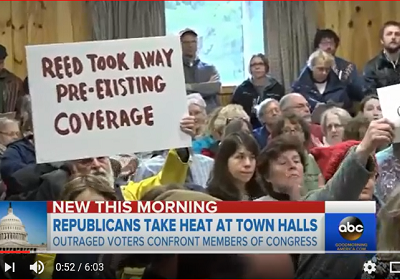 As millions of voters have mobilized around the country over the past six months, it’s clear that the majority want support government sponsored healthcare. Pew Research in January 2017 (before all the marches) reveals 60% of Americans favor government responsibility for healthcare coverage over 38% who felt otherwise. However the Republicans have long had as their objective the goal to destroy affordable healthcare.

It’s logical that the Affordable Care Act (ACA), still in its infancy, would experience growing pains. While not perfect, it’s been more than good enough for many who either didn’t have healthcare before, or couldn’t afford it.

There is plenty of evidence that despite flaws, it’s good has more than outweighed the bad. Over the past six years, outpatient clinics have expanded their services while continuing to streamline and standardize reporting methods. People who never had a healthcare plan before received full, complete checkups along with diagnostic screenings for the first time in their lives.

Preventative and wellness care has been shown to help save costs in the long run. A healthy workforce also stimulates economic growth. A study published by the Center for Economic Policy and Research in March 2017 finds that the security offered by the ACA has afforded long-time older workers the opportunity to take retirement. It also adds dignity to the lives of those choosing to work part-time. Voluntary part-time work allows younger people, mothers, and older workers the chance to lead more fulfilling lives.

With the pressure to enact change in the first 100 days of the Trump Administration, the House acted swiftly. Introduced on March 8, 2017, the American Health Care Act (AHCA) took only 16 days to pass several House Committees, and was declared ready for vote on March 24, 2017.

During the delay of a month, many ACA grassroots organizations hoped the bill had died. However, all that was needed was a compromise between the neoconservatives, who desired a stronger repeal, and their fellow Republicans.

Again the timing was such that the amendment was made available only shortly before the call for a vote. It was introduced on April 25, 2017, and by May 4, 2017 (only 10 days later) the repeal act passed the House.

It’s not enough that both President Trump and House Speaker Paul Ryan constantly describe the ACA as being on a “death-spiral.” The politicians on both sides of the aisle, but especially on the Republican side are lobbied and offered donations by Koch-brother supported organizations, by trade groups such as America’s Health Insurance Plans, and by Big Pharma companies.

As such, all that is needed is the appearance of a repeal battle to appease public sensibilities. Meanwhile unbeknownst to the public the politicians are inundated with lobbyists and donations from Big Pharma and insurance. Drugwatch.com gives an idea of the yearly magnitude:

With the help of staggering profits and an army of 1,378 paid lobbyists, the industry spreads its influence on Capitol Hill. From 1998 to 2016, Big Pharma spent nearly $3.5 billion on lobbying expenses — more than any other industry. In 2016 alone, it spent about $246 million — more than the defense industries and corporate business lobbyists combined.

Hundreds of millions of dollars are spent every year on government representatives and regulatory bodies to help ensure predatory practices such as exclusive rights and price inflation. This is partly why many observers expect that the Senate will cave into special interests over their constituents.

The secrecy surrounding the current Senate version of AHCA also includes the devil in the details, as Our Future describes:

The Senate bill will kick people off the Medicaid expansion; the only question is how quickly. It will cap care under the entire Medicaid program – not just the expansion – instead of continuing to fund Medicaid according to need. The repeal will slash subsidies to make premiums, deductibles, and copayments more affordable. And it will open the door to gutted insurance plans, with no coverage for services like maternity care or mental health.

Secrecy ensures fewer phone call, less outrage, fewer demonstrations–all designed to break the will of the people while sneaking in a deadly bill.