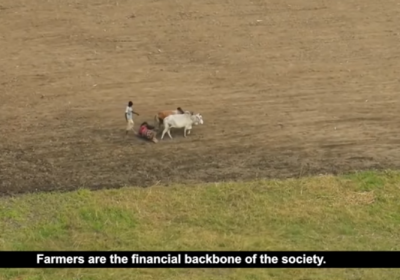 Indian farmers have set a record strike since November 26, 2020. These have made the headlines in India newspapers but are scarcely given any attention in Western media. According to People’s World, farmers, joined with tradespeople from all over India, are striking, and the numbers are daunting. Over 250 million workers, joined by students, supported by farmers wives who prepare food baskets, and organized in many villages throughout rural India, have gathered in New Delhi and other cities in waves of unrest over the past months.

At issue is the stranglehold of neoliberal policies and practices enacted under India’s Prime Minister Modi. At stake are the livelihoods of the farmers who are willing to risk everything. One of the policies they protest is the forced conversion to digital currency or demonetization. Overnight four years ago, the Modi government withdrew the most popular big currency notes from circulation, making it extremely hard for those without bank accounts to conduct business: it decimated the huge informal economy.

Many small farmers rely on currency for transaction because it is one way to circumvent government control on what may be purchased. The government even admitted that taking such measures was to clamp down on the “black market.” However what the Prime Minister Narendra Modi regards as the black market is hardly the sort of tax evasion havens characterising corporate crime. It is trying to force small farmers to abandon traditional business practices and organic farming methods, but instead adopt bank-credit methods. The World Bank and seed giants working with Monsanto have long regarded India as a new futures market.

By forcing GMO seed patenting and industrial farming methods, multinational corporations (MNCs) can create financial dependency, speculate on grain futures, reap huge profits, and take over Indian farms. And it appears that the Modi government policy hopes to accelerate these trends by culling small farmers, forcing them into feudal-style citizenship, or creating mergers that will close down entire villages. One evidence of this is Modi’s policy of eliminating price supports. Another harmful policy allows direct contract negotiations with MNCs or their representatives, meaning that MNCs will be able to dictate prices and force out middlemen buyers. Instead of helping Indian farmers stabilize and nationalize the selling of grain, the effect is more cut-throat competition. In fact, going back to the 2000s, as documented by community activist, author, farmer, and professor Dr. Vandana Shiva, the government of India has been pressured by the World Bank via its Structural Adjustment Programmes (SAPs) to “make the Indian seed industry more viable and result-orientated.” Western multinational corporations, such as Monsanto and Cargill, desire inroads into the Indian farming industry. As in the Philippines with the “golden rice” scheme, MNCs are ready to do this by offering sweetheart deals with agricultural extension programs. They also launch expensive media campaigns replete with field tours of cash monocrops and offer free how-to’s for helping Indian farmers “get rich quick.”

Today’s “green revolution” is a remake of the 1960s “green revolution” with its heavily reliance on petrochemicals. Instead of Dow chemical herbicides, the new ones use exclusive GMO seed patenting and specially brewed herbicides and pesticides. Because many of the middle men are salesman and farm-bureau type representatives, the small farmers are prone to being sold generous packages with GMO seeds that are part of bank-credit offers. However the process of applying supplier’s fertilizer, herbicide, and pesticide add up in the debt package. In many previous instances, the Indian government could not vouch for spurious “trusted” seed or toxic brands of herbicides and pesticides. The farmers who take great risks in changing to the recommended cash-crop lose everything when unforseen things happen, such as fickle weather, pesticide-resistant cotton boll-worms, unexpected disease, or a limited harvest—unpredictable factors which will be exacerbated by climate change. When the farmers trade their cows for tractors and expensive farm implements, not only is their credit over-extended, but the fertility of the farm and its organic methods fall by the wayside. Other farmers in the same predicament can hardly sell their tractors second-hand except on an informal basis using cash or barter. As an added detriment, small trades associated with traditional farming methods also suffer due to lack of circularity in the local economy. Perhaps as an added insult, never minding that these farm villages have practiced sustainable organic farming methods for centuries, Western markets envision selling all kinds of new artificially intelligent gadgets using the meme of “growing smarter and more sustainable.” Yet ironically enough, the Modi regime’s focus on neoliberalizing the markets bans farmers from even earning private income such as by cold-pressing their own harvested seeds for oil.

According to Dr. Shiva, in her lecture “Oneness vs. The 1%” delivered at the United Nations Research Institute for Social Development (UNRISD) Conference in 2018, the local seed-oil ban is because the presses are not certified, even though ever since the Satyagraha movement (initiated by Mahatma Gandhi in 1945), there has been a huge support for home handicrafts whether spinning of cotton, mining of salt, or pressing of seed oil. Thus the point always appears to be whatever the Western market prices will bear rather than what will benefit the people of India. And this is why the farmers are protesting so vigorously against the Modi government to repeal the three farm bills. Just like Modi’s attempt to demonetize the economy had an adverse effect on small trades, so the three farm ordinances passed by the Modi government in June 2020 are having adverse effects and spurring massive protests and demonstrations. The first ordinance, the Essential Commodities Act, has a new clause stating that the government does not have to regulate foodgrains, meaning that private companies will now be able to hoard grain. The second ordinance scraps the Agricultural Produce Market Committees (APMCs) system in which farmers sell produce to commissioned agents offering price guarantees. Now farmers will no longer have minimum price supports against big traders or monopolies. The third ordinance allows contract farming which undermines farmers’ independence and eventually pushes them off their land.

According to PPK NewsClick:

Companies will push farmers to produce certain kinds of crops, say, potatoes (for chips) or tomatoes (for ketchup) and any such scaling up will affect the foodgrain output of the country, opening the doors to other companies offering to import the foodgrain. In other words, the country’s food security may be jeopardised…Sharecroppers and other tillers of the soil will get thrown out though the ordinance says they shouldn’t be. The economics will motivate land owners to increase eviction.

In other words, the rural farmers of India are being abandoned by their elected leaders and sacrificed to the World Bank for the sake of corporate efficiency and profit. In the settlement of disputes in the neoliberal paradigm, the arbiters side with the monied and leverage terms that break with all India traditions. Assets such as private water wells, well-placed lands, herds of cattle, may have to be sold or auctioned off, while farmers’ widows survive only hand-to-mouth, just as described by Vandana Shiva in her book, Seeds of Suicide:

“The lifting of agricultural and power subsidies have pushed up the cost of cultivation substantially and the withdrawal of safety nets like the universal public distribution system for food has increased expenditures for poor families. The burden of irredeemable debt has eroded the living standards of those who are already poor, throwing them to the mercy of moneylenders, and depriving them of their dignity and standing in the rural society. The noose is already around the neck of the farmer….”

As with all movements, the Indian establishment appears ambivalent because the Modi government maintains a chokehold that includes the mainstream and independent media. The police have been invading news bureaus and arresting media journalists (including from PPK NewsClick) on baseless charges. The phenomenon of the long-strike by the Indian farmers is undercovered because the Bharatiya Janata Party (BJP) wants to stay in power. The latest reports indicate that in spite of the COVID crisis, and because elections are being held this spring, farmers and workers resolve to continue speaking up and demanding humanitarian considerations.

Prime Minister Modi and his reactionary government are part of a rising trend in authoritarianism around the world favoring the use of the military, and repression against the people, stemming from the wealthiest classes’ push for control of dwindling natural resources and desire to maintain unfair trade practices that will exacerbate tensions on a smaller Earth.