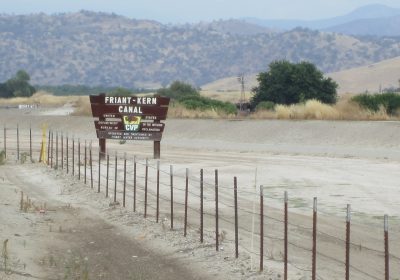 On June 4, 2022, in an interview with California Insider, Brett Barbre, a former Yorba Linda Water Board Member, summed up why California needs more water reservoirs soon:

“We’ve not built the necessary storage to keep up with population growth.“

In an exclusive interview with California Insider’s host Siyamak Khorrami, Brett Barbre, a fourth-generation Los Angelesan, asserts California’s drought is man-made because they have neglected to continue to develop water storage capacity.

California has many reservoirs and dams, and the capacity to pipe water in whether from across the border in Oregon, south from the Owens Valley, or from the Colorado River. But many of these systems have become antiquated. Much of the infrastructure was built during the earlier half of the last century, with subsequent build outs in the 1970s.

After the 1970s, particularly with the passage of the California Environmental Quality Act (CEQA) legislation, water infrastructure projects became bogged down by many rules, requirements, and studies. Years of delay and lawsuits postponed indefinitely various proposals to improve water capacity by enhancing or building new reservoirs.

According to Barbre, “We really have not kept up with the population growth and so you’re going to have built in droughts and shortages.”

Examples of water infrastructure in quagmire include Governor Brown’s proposal to increase the capacity of Shasta Dam by raising the reservoir height 18 feet. This would increase Lake Shasta reservoir by 600,000 acre-feet in extra water storage. The plan, however, faced numerous legal obstacles. After some wetter years, the plan was forgotten.

Another example is Sites Reservoir situated in a pocket south of the extremely wet Humboldt County region and the northern Sacramento River Valley. Again it faces numerous obstacles, whether due to proximity to federal or affected tribal lands.

Here are other salient points from the interview:

First, Barbre does point out that California has indeed worked to implement water conservation policy especially in Southern California. Besides better consumer choices in household plumbing, there are no-watering-lawn days, and recycling of storm and sewage waters. However for Californians who luxuriate in the lifestyle of individual swimming pools and large home ownership, the crimping demands of water savings is still too much. He doesn’t want to be told to cut his water use by more than say, 10%.

“It’s easy to use the hammer of the state government so you will cut 20% of your water usage. But they really don’t look at the regional areas. Southern California has invested billions of dollars in our infrastructure; building new supplies of water. We have a desal [desalination] water plant in Carlsbad that we’re paying for locally. We tried to get one in Huntington Beach but the Coastal Commission shot that down and said, no, you can’t build it. They said you’ll have too much water—which—never can understand how you can have too much water. We’ve built storage in Southern California; we built recycled water facilities; so Southern California, we’ve prepared for droughts; we’ve invested for that. The rest of the state hasn’t.”—-Brett Barbre, Water Consultant

Second, experts rightly point out that insofar as planning goes, generally the engineers had sized California’s reservoirs for future population expansion but predicated upon expanding the State Water Project. Engineers took it for granted that a lifetime’s worth of project planning and design would continue through to construction, something that did not transpire after environmentalists began to stymie hydro-electric dam and reservoir proposed projects with lawsuit after lawsuit. And as the population has doubled to almost 40 million, the needs have grown.

Third, because Northern California has failed to keep up with and opted for water conservation, Central Valley farmers’ water allocations have dropped steadily to the point of zero this year for all but those who hold “senior” water rights. This means that the domestic farm economy will suffer if we can no longer grow California fresh fruits and vegetables.

“The State of California, Sacramento, the San Joaquin Bay Delta which is the hub of the water for the state gets about 32 million acre-feet of water in flows each year. Yet we only have 16 million-acre-feet of storage, so…Colorado River you have four times the average flows in storage available; the State of California only 50%. So if we had more storage, we’d probably need just maybe 5, 6 million acre-feet of storage; if we had that, we’d withstand any drought.”—-B. Barbre, retired MWDOC Director

Fourth, as Barbre points out, even though the Colorado River is suffering lower flows due to drought, nevertheless, in terms of storage capacity, the system holds 60 million acre-feet, which is four times its average flow of 15 million acre-feet per year. That means they can capture all the inflows from throughout the Colorado watershed and be able to withstand extended drought. In fact, cities such as Phoenix have also done water-banking, for instance, recharging their underground aquifers for dry years. California, meanwhile, which only draws about 5 million acre-feet per year from the Colorado, has taken steps to reduce its dependence, but still has expanded water facilities only in Southern California.

Fifth, as the Fresno Bee has reported on extensively, the zero-water allocations for Central Valley farmers mean they must drill deeper water wells on their land or face bankruptcy. Today, thousand feet wells are not uncommon as the California State Water Resources Control Board regulates only surface water. In fact, there is little if any consistent data collection or monitoring of underground water levels, and traditionally farmers can draw as much water as they please provided they can afford to drill down deep.

So how critical are California’s water issues?

However as commentators note, once an aquifer dries up, that aquifer becomes essentially impervious. As the ground sinks and compacts, it also creates sinkholes that endanger the safety of structures throughout the vicinity. Sudden storms can even topple structures that rely on semi-saturated soil embankments for support, further endangering water conveyance.

Thus, one might surmise that there is indeed a too short supply of civil engineers to design new projects and to renovate long-neglected facilities. In fact, the need is critical due to the timeline it takes, generally 10 to 20 years from design to build, for significant improvements for monolithic structures such as dams. The president really must use emergency authorization, such as the National Defense Authorization Act, to build critical infrastructure needs here at home, and especially to bypass all the lawsuits.

But water conservation is also part of the new reality, even if we don’t agree with the tenets of the Green New Deal program. The reason why California has not run out of water despite all the population growth is because thanks to federal water conservation and energy savings standards, people’s water footprint might easily be half what it used to be. As more people take public transportation, there is less car-washing. People are conserving hot water, using less water in daily needs, and factoring in water recycling, there is at least 25% reduction.

Since 2000, many small farmers throughout the Valley have faced difficult choices. They have already implemented a variety of sustainable practices in order to compete whether installing drip irrigation systems, blankets to protect new crop or soil cover, green houses for seedlings, timed watering systems, hand weeding, crop diversification, crop rotation, networking for supplies, harvesting, etc. In the Central Valley, generations of farmers and experts at Fresno State have fostered community farming including massive studies on pumping methods. Nevertheless, the drought has driven farmers out of business, and put at risk Hmong and Sikh family-owned, who soon will be forced to join the urban poor. Here are some rough estimates of the annual supply of drinking water and other water needs in California:

Method #1 AGN takes a quote from When the Rivers Run Dry by Fred Pearce:

“The Sierra Nevada normally provides a third of the state’s water. But it was in its fifth year of drought—perhaps the worst spell for a thousand years. Combined with higher temperatures, which meant more winter precipitation falling as rain, the drought meant that the snowpack—the state’s most reliable source of water—was faltering. Other California water sources were doing no better. Underground water was being pumped dry, especially in the agricultural heartlands of the Central Valley, where farmers had always been allowed to pump as much as they wanted–with predictable consequences. The state’s pumping has for many years exceeded the replenishment from rainfall by about 15 percent. That meant an overdraft of 1.3 million acre-feet a year.” — Fred Pearce, When the Rivers Run Dry

Method #2 In the second method AGN uses the traditional design calculation of drinking water needs of 100 gallons per person per day. Using the 2020 population and rounding to 40 million people:

Applying a safety factor of 2-3 for drought and population growth, the storage range is about {46, 69} million acre-feet per year in annual water storage

AGN finds that ranges in planned storage volumes ought to be 100-200 million-acre-feet annual water storage capacity minimum, even if the rain is not quite falling as much as it ought, for once these sorts of reservoir volumes are in place, the current system can be altered to reverse flow, pump from even further out of state, or the ocean as needed.

After all, water is a human right, even if reasonable conservation measures should be taken and encouraged, and metering or automatic shutoff is warranted in cases of extreme water theft.

Photos and report by Christine H. Kroll, P.E., M.A. (Oregon)– Note the estimates are really to encourage readers to read and learn more about the critical drought issue, for with water, nothing is set in stone.