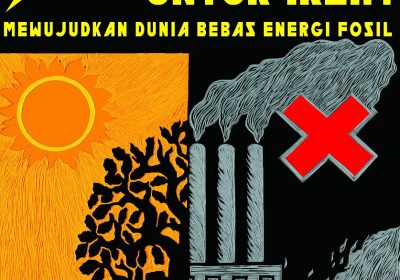 Rise for Climate is one of many grassroots organizations turning out during the week of September 8-14, 2018 around the world to demonstrate on the need for stronger commitment to action to prevent global warming. Already events are underway in Britain, Germany, Africa, Kyrgyzstan, Indonesia, Philippines, Vietnam, and Australia.

Global warming is already affecting our livelihoods in the Southern border provinces of Thailand. We cannot even afford a single coal-fired power plant to be built. We are rising to stop coal and call for renewable and sustainable sources of energy. — Lamai Manakarn, Activist and Representative in Pattani, Southern Border Provinces of Thailand Network

In what 350.org describes will be the largest mass mobilization event in U.S. West Coast history, huge throngs are predicted on September 8th &9th the weekend before the 2018 Global Climate Action Summit in San Francisco. Other marches will take place in Los Angeles, and in San Diego, California emphasizing their area-related issues.

According to the It Takes Roots:

With these events, that will run parallel to the Global Climate Action Summit, we will call on Governor Jerry Brown, media, elected officials from across the country, and corporate executives to listen and acknowledge frontline and grassroots communities as the real Climate Leaders protecting people, land, water, and air. We will demonstrate how the most regenerative solutions to the climate crisis require not only decarbonization, but also strategies to decolonize, detoxify, demilitarize, de-gentrify and democratize our economies and our communities.

The United Nations Global Climate Action Summit taking place between September 12-14 bills itself as a “galvanizing opportunity for global businesses, investors, states and regions, cities, civil society and citizens to showcase and deliver bold new action on climate change.” However reading the event information carefully, it’s easy to see why environmentalists are concerned.

This international meeting is yet another checkpoint in the progress being made to reduce the world’s global carbon emissions according to the historic Paris Agreement to limit global temperature rise to below 2° Centigrade. But the 2018 Summit Steering Committee Statement sounds overly optimistic, and the challenges are many and complex. The potential for delay, and sanctioning of fake greenwashing solutions will not buy humanity time.

This is why lead grassroots organization, such as 350.org, established a host of sister organizations. They hope to draw more youth and young professionals into the climate action movement especially building on California’s unique geographic pluralism. They include Climate Jobs and Justice, Grassroots Global Justice Alliance, and Right to the City. Together they are saying: No more stalling, no more delays: it’s time for 100% renewable energy for all.

California is currently besought by climate change challenges. On the one hand, its State Legislature, including Governor Jerry Brown are among the nation’s most progressive. The Legislature recently passed SB100, a bill that will mandate zero-carbon emissions by 2045. On the other hand, there is tension due to the increase in wildfires, water scarcity, pesticide use, and permits for hydrofracking.

According to Juan Florez of the Center for Race, Poverty, and the Environment, Kern County is the second-place county when it comes to extraction of oil. Residents of Kern County in the Central Valley have long struggled with air and water pollution, and the advent of hydro-fracking for fossil fuels has exacerbated health problems and job exploitation. Activists hope to convince all climate leaders to walk the talk.

The goal of environmental and civic organizations such as Californians Against Fracking, Citizens Climate Lobby, SEIU, Greenfaith, and many other partnering organizations is to draw attention to the demands of ordinary people. Fracking and off-shore drilling are not sustainable, and viable climate solutions that are inclusive of economic and racial justice are needed.

Environmentalists also decry prioritization of oil and natural gas developments over the needs for clean water and safe food. Groups such as Protect California Food, a growing coalition of environmental justice, agricultural, health, political, and environmental organizations working together to stop the dangerous re-use of fracking water for crop irrigation are sure to be at the march taking place on Saturday, September 8th.

We are marching alongside thousands of people from around the world who are on the frontlines of fighting big polluters and building new ways to power our neighborhoods through 100% community-owned renewable energy. We’re sending a message to the elected officials and corporate executives gathering for the summit next week that we need equitable, community-led solutions, not profit-driven approaches like cap-and-trade that allow big polluters to buy and sell our right to clean air and a stable climate.

Throughout Sunday September 9th there will be nonviolent action training taking place as well as a variety of community solutions tours. From August 25th through September 25, 2018 hundreds of affiliate events are planned. Many events are also listed at the Global Climate Action Summit Events page, including Freedom to Breathe, Green Film Festival, Stories from the Frontlines, and technical showcases. Meanwhile thousands of rallies, marches and events are scheduled around the world according to Action Network.

To ensure that U.N. Summit participants might take notice, nonviolent direct actions, such as rallies, are planned next week. Before the Summit, the grassroots marches and rallies around the world will be posted on social media at 350.org Facebook and Twitter at #RiseforClimate and in California at #climatejobsjustice. Grassroots citizens can share and upload photos which 350.org will also pick for its Flickr album.

The 2018 Global Climate Action Summit will focus on themes such as healthy energy systems, inclusive economic growth, sustainable communities, land and ocean stewardship, and transformative climate investments. Their proceedings will be live-streamed on Facebook and Twitter at #StepUp2018.

Together it is hoped that business leaders, investors, experts, politicians, farmers, and activists can enjoin in building of solidarity and amplifying the people’s solutions.

Rise for All Creation by Peace Poets and Thrive Choir, posted at https://youtu.be/VWzcPDrKIfI