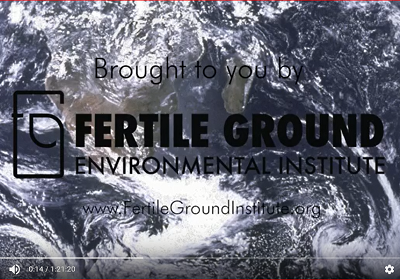 Derrick Jensen is the author of more than 20 books, one of the founders of Deep Green Resistance, and the key note speaker of Earth-at-Risk Conference 2014. The video was recently released by the organization, most likely as a reminder: Earth is at-risk.

AGN had the opportunity to listen to the talk. In this hour-and-a-half-long seminar, Jensen explains why our planet is at-risk, why it matters, and how bound up humanity is with destruction. Jensen offers a powerful socio-analytical metaphor of complex post-traumatic stress disorder (CPTSD) syndrome in his talk, “Why are so few of us fighting back?”

The analogy that we are victims of conquest is not exactly new, however it has never been explored so openly, passionately, and naturally. Professor Jensen’s outlook is as earnest and convincing as a colonial revolutionary (think Samuel Adams); he peppers his talk with ecology, asks his audience fun questions, and doesn’t mince words.

Essentially, his thesis is that we are living in a PTSD culture and entrapped in modes of learned helplessness. Our “frenetic passivity” is redirected towards acceptable forms of Death-Urge. Our lifestyles embrace a culture that cuts off our ties and kinship with nature in its most wild primeval forms. Our media depicts us as masters tinkering with nature using technology. Even our sustainable practices justify usurping indigenous forest for palm-oil plantations.

“Burning oil isn’t the problem,” Jensen asserts, “It’s a symptom of the problem.”

Jensen cuts to the chase common explanations of failure to curb greed, natural predatory instincts, or failure to incorporate conservation into our daily lives as reasons the planet is dying. Instead, he questions the framework: what is our epistemology?

Of course many developing nations, especially in recently-industrial Asia, are following closely the same models, making rapid strides in worshipping the same Death-Urge.

Jensen credits the work of R.D. Laing in analyzing and postulating how the dominant culture operates somewhat like an “abusive family.” In the Marxist sense, one might argue that industrial mercenaries profit most from dysfunctional families while doing their best to sow division. From the ecological perspective, however, the pollution of the Commons and wanton destruction of forests and habitat is an extension of our psyche.

“The entire culture is suffering from PTSD”

Jensen credits researcher Judith Lewis Herman for providing him insight into how complex PTSD can apply to the societal psyche. Today’s collective stupor emanates from the societal narcissism, one in which humans, bolstered by Western science, rule the planet with impunity. More importantly, this stupor is an associated characteristic of trauma or PTSD. J. Herman:

“In the aftermath of trauma, people see danger everywhere; this seems to be a biological phenomenon, not just a psychological one.”

In this context, destruction of forests, over-harvesting of fish, massive downing of buffalo did not just stem from machismo. They represented opportunities for role reversal. Picture the landless peasants finally getting to enact their unconscious fantasy of royal fox-hunts. Victims believe they are in control when, in fact, their emotions are shut down, their intellect is confined to role-playing, and they are acting out in internalized brutish displays of conquest.

This analogy may be extended to today’s high-tech life-styles. Not only are people today isolated from Nature, but we figuratively worship and love our abuse, further indulging our victimhood and perpetuating the cycle.

Dolphins are dying, but my iPhone contains lots of pictures of them.

Many of the kinds of questions Jensen asks startles listeners because they are so untypical of what we might be expected to ask ourselves whether it’s the establishment or the institutions we work, attend, or train in. For instance, has anyone ever asked:

“How many machines do you have a daily relationship with?”

“How many plants and [wild] animals do you have a daily relationship with?”

In the ecologic sense, few of us are conscious of how we have become systematically cut off from Nature’s wellsprings. Few of us will ever travel up a watershed to its far reaches. Fewer of us grasp the concept that the dominant industrial civilization is one that “must destroy or assimilate every Native American culture that it can.”

We can’t fight back against the system if we don’t understand the nature of our oppression or the extent of destruction taking place on Earth at our future ecological expense.

Furthermore, Professor Jensen postulates that the reason we don’t fight back, the reason why we co-opt the master and then become abusers, is because everything is innocuously codified to underscore the right of conquest.

“Seeing someone free is too painful, so we have to destroy every reminder of who we were. Instead we have to seek and exert control. We must be the ones who Do-to, not To-whom-it-is-done.”

For someone who hasn’t heard any of this before, it is a serious wake-up call. The message resonates for any person who has ever been part of an abusive relationship. It’s only when we see how we have externalized our sense of helplessness that we come to realize why it is important that we do something about it before it is too late.

Dr. Jensen goes on to discourse on types of pro-social communal behaviors: the society we can become, if we worked on identifying and rejecting the Technics of control. Here Jensen refers to Lewis Mumford and his theory of Technics, and how it is our culture and milieu that gives rise to certain types of technologies which ultimately enslave us.

Democratic technics are those confined to local community resources, such as building canals and supporting agronomy. Authoritarian technics are those which cannot be locally sourced whatsoever, such as nuclear power plants. Conversely it may explain why certain inventions were overridden by cultural values, such as valueing peace and harmony over bomb-making.

Deep Green Resistance (DGR) is in a class of its own. It won’t rely on green private-public partnerships; it extends far beyond the classist labels of human society; and it encourages people to do what they love to create natural change in harmony with the real world. It reaches into our core belief systems and challenges our most fundamental assumptions.

This lecture convinced me to begin imagining new ways of surviving so that the planet and its inhabitants can survive. Once I started to review my notes from the 2015 USSF seminar, it was a matter of time before appreciating the ecological touchstone many ancient cultures relied on for millenia. In this sense, the Deep Green Resistance movement is designed to be education worth living.