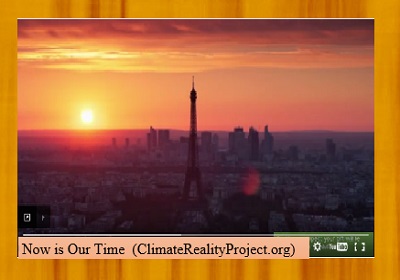 Diplomats, experts, and advocates are preparing for the 2015 United Nations Climate Change Conference convening on November 30, 2015 in Paris, France. COP21 aims for legally binding, international agreements for reducing carbon and greenhouse gas emissions. The acronym stands for the 21st yearly session of the Conference of the Parties since the 1992 United Nations Framework Convention on Climate Change (UNFCCC).

Millions of grassroots citizens to professionals joined the People’s Climate March around the world last year in September 2014. Organizers drew attention to the fact that critical changes in energy allocation and use are needed to keep global warming under control.

Last year the Intergovernmental Panel on Climate Change (IPCC) reported that 2 ºC (3.6 ºF) is the threshold of global catastrophe. Beyond this the threat of uncontrollable warming from positive feedback loops loom together with massive natural species extinction, rising ocean salinity, sea-level rise, glacial retreat, and severe weather events. Translated: life will be much more difficult for billions of poor people around the globe.

Here is what the United Nations High Commisioner for Refugees states on climate change:

For UNHCR, the consequences of climate change are enormous. Scarce natural resources such as drinking water are likely to become even more limited. Many crops and some livestock are unlikely to survive in certain locations if conditions become too hot and dry, or too cold and wet. Food security, already a significant concern, will become even more challenging.

The Paris Conference takes place November 30 – December 11, 2015 in Le Bourget, Paris a suburb near adjacent Paris Airport-Le Bourget. Over 50,000 participants are officially registered. As frequently the case with climate conferences there will be pre-conference lead-up and events.

Climate Reality Project is an affiliate website for civil society and geared towards grassroots advocates, volunteers, and students. Accessible on smartphones and laptops, you can quickly learn what’s going on. Videos demonstrate how local individuals around the world are teaching their own communities ways to utilize best available practices in eco-energy development.

AGN would like to recommend two films worth watching so far:

Tune in on November 13-14th when 24 Hours of Reality and Live Earth will present a global day of action and music with live segments from around the globe. Hosts and guests will include former US Vice President Al Gore, artists and influencers.