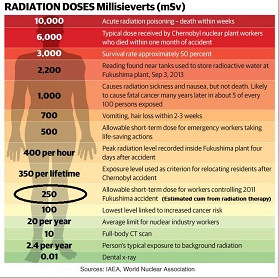 When the oncology team informs you that you need to receive adjuvant therapy for cancer treatment, it sounds scary–really scary, especially if it is mixed with periodic chemotherapy—and it comes after several major surgeries.

Usually the cancer patient is told it will help ensure that mutant cells, which are vulnerable to things like radiation, are destroyed. The goal is to prevent remnants lingering in that particular region from growing a new tumor.

How can one’s body absorb all that radiation?

First, it’s usually parsed into small fractions administered over a longer time period. For instance, the patient will maybe receive 1.8 Grays per day for 25 days.

Second, the dose time is very short. Instead of all day, it usually lasts no longer than several minutes.

Third, the radio-isotopes used are not deadly (like Uranium), but those commonly used in medical radiation therapies, such as Carbon or Barium which—although ionizing, may have comparatively shorter life spans.

Fourth, the radiation oncologist designs the treatment for optimal precision using 3-dimensional technology shaped to aim the beam at different angles in order to reach the tumor areas while minimizing harm to other organs.

Radiation exposure of any kind carries risks, according to the Nuclear Information and Resource Service (NIRS):

Exposure to radiation increases the risk of damage to tissues, cells, DNA and other vital molecules–potentially causing programmed cell death (apoptosis), genetic mutations, cancers, leukemias, birth defects, and reproductive, immune, cardiovascular, and endocrine system disorders. The varying impacts on health of each of the hundreds of different nuclides to which people may be exposed are simply not known.

The empirical measure of radiation standards against a “standard man” is one instance where the industry fails to account for real people. In particular, there are more extreme impacts on women, fetuses, infants, children and elders.

One has only to think of the Bell-shaped curve with standard deviations to conceptualize why it may be oversimplistic to group nuclear wastes; or to base safe exposure levels on low versus high exposure statistical limits.

Only a few seconds of exposure to highly radioactive low-level waste can be permanently debilitating. Even the scientific units are based on heuristics. NIRS:

Since scientists do not truly know the specific impacts a given radionuclide may have on the organs and tissues of a specific person, the translation of the amount of radioactivity to which that person has been exposed (in curies or fractions of a curie) into a radiation dose (in rems or millirems) is basically speculation. That is, determining the quality and the quantity of a radiation dose is far from an exact science.

In a short space, it’s impossible to explain the complex biophysical arguments filling the coves in nuclear engineering and medical libraries, nevertheless, many of us have seen simplified charts published by agencies on levels of exposure.

How could 45 Greys (45,000 Rads) be quantified in terms of bodily exposure? Is it potentially fatal, as Natural News points out in his concerns?

45 Grays=45,000 mGy over a month is a lot of radiation, but it was in short doses for only minutes at a time aimed at specific organs inside the body.

The above calculation quantifies the entire exposure time period with the entire dose, which comes to about 1.6 Grey in one day or 0.00432 Grey in one year.

Consider that Greys (radiation absorbed) are roughly equal to Sieverts (radiation dose); however to convert use a factor of 0.96. (Factor may also by a tenth since this is an applied science).

The common measure for radiation dose charts is milliSievert:

Now you have a figure to work with for comparing with radiation dose charts. However, you also received many CT scans during this year, at least 2 per month starting from when you were diagnosed. So altogether, rounding up, you received 245 mSv from CT Scans plus radiation therapy over that one year.

That one year, including background radiation, estimated at 3.6 mSv, you received:

That’s really quite a lot of radiation for one year, but this is milliSieverts. Magnification of what 250 mSv may entail (adapted from https://xkcd.com/radiation/)

According to the Monroe & Reed Research Reactor Radiation Dose Chart, 100 mSv is the “lowest one year dose clearly linked to increased cancer risk.” This is the same value on the Chart of Radiation Dose Levels in MilliSieverts by IAEA, World Nuclear Association.

Here you can see that while 250mSv is the recommended allowable short term dose for emergency workers trying to control the Fukushima accident of 2011, it is still below the 350mSv recommended lifetime threshold for relocating residents after the Chernobyl Nuclear Accident.