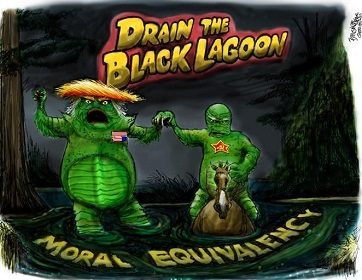 For those of us who are feeling underwhelmed with the soap-opera like events taking place at the nation’s highest office, the White House, these last few days, here’s some comic relief.

Democratic Underground‘s “Pic-of-the-Moment” discussion post is one of many cartoons spawning from the latest debacle. To fill in briefly, last week, President Trump fired FBI Director Comey amid conflicting reports of whether he did it because he thought the Director was inept, lacked leadership ability, or other indiscretion. Scene right out of The Apprentice

Upon closer examination, news media revealed that Trump felt Comey was getting too close to the Russian investigation. Then there was the meeting with Russian officials, and now there is Washington Post ‘s report that during this meeting highly classified information was shared with the Russians.

All this time, while CNN  and MSNBC  have been reporting unfolding events by the hour much like reality T.V., while state-sponsored RT  stiffly denies and downplays any presumed Russian investigation as political spoofing. Of course the more the Russians deny any involvement, the more suspect the allegations. If you have any experience with Russian hackers, you know that when a search term like “Putin” is executed, the algorithm can bounce your search into hacker-land in clandestine ways. Your device may even start to stall, an indicator of hijacking. A new kind of infrastructure is being installed

The problem about who has been had or is being had is indeed quite serious. It’s not merely that your personal safety or our national security is compromised by suspicious foreign alliances. Our trust is being eroded in the very person whom every school-child is taught to look up to while saying the pledge of allegiance each morning. Can you afford this

The antidote of cartoons is of the highest order: A visit to U.S. News with it’s “Cartoons on President Trump and Russia” ordered by the Muse.

Eat, drink, share, after all, laughter is still one of life’s best medicines.