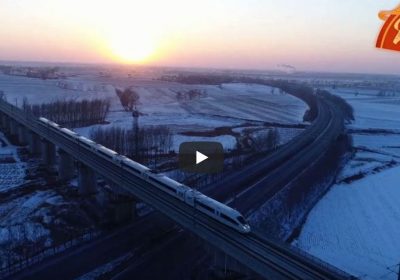 China has spent more than $1 Trillion in its high-speed rail (HSR) and transportation infrastructure since the 2000s. While some of the seed money came from the World Bank, vast sums are borrowed and the in-house design-build since 2008 has occurred at an increasingly frenetic pace. Railways Explained even jokes whether or not China (PRC) has lost its mind.

Actually not. What the world does not know is that China often identifies its losses from the colonialist period as stemming from its slack industrialization. During the Sino-Japanese War, many of China’s railways and infrastructure were bombed to smithereens. In hindsight, Chinese historians identified the weakness of transportation infrastructure as a factor in slow commercialization, preventing the timely flow of raw materials north to south in the country. Thus, a strong national vision for the Party has always included rebuilding its railways. In fact established national proposals were published and approved in 2004 in the form of implementable 5-year plans.

In 2008, the World Bank approved seed money for 2600 km of high-speed rail. Initially the PRC would only develop HSR between Beijing and Tianjin, a suburban city located 112km (70 miles) away. However after only five-years, the project embraced in-house design, production, and standardization to such a degree that the vision expanded to one significantly more ambitious. A map shows major high-speed rail lines, the “Four verticals and Four horizontals,” included in the master railway network plan for 2020 shows HSR trunk lines spanning from the coastal east to its remote NW outposts, and even to Tibet. In a feat unimaginable by Western standards, by the end of 2020, China had constructed 100,000 km (62,000 mi) of railway line of which 36,000 km (22,400 mi) are HSR trunk lines. The trunk lines have speeds of up to 350 kmph (217 mph) for travel between major cities and are designated “bullet trains.” Secondary lines with speeds of up to 250 kmph (155 mph) connect major to medium-sized cities. New local lines sharing passenger rail with express freight travel with speeds of up to 200 kmph (124 mph). In fact all the new rail lines are high-speed capable, but the trunk lines are officially built exclusively as “bullet trains” with its sophisticated viaducts and tunnels designed to provide no-stops and smooth operation.

Of course “bullet trains” are actually not a new phenomenon at all. The first country to initiate research and development on high-speed rail was Japan. By 1964, Japan launched its first bullet train, the Shinkansen, which traveled along its mountainous western coast at speeds of up to 200 kmph (137 mph). While by today’s standards it is high-speed, there were many challenges to overcome from survey to design as well as in railway construction. This included building dedicated rail-line with many tunnels and bridges, developing precast railroad ties, using a wider gauge track, and installing seismometers to ensure that the system could shut down quickly at the first sign of an earthquake.

It’s popularity and safety record spurred European nations to follow suit, and over the decades France, Germany, Italy, and Spain have all developed high-speed rail lines. Whether operated as private or publicly funded systems, however, the legislative challenge in the European Union over standardization often leads to inconsistencies in schedules, confusion over transfers, and the need to travel to different locations.

In China, standardization of procedures has contributed to remarkable efficiency as shown in documentary news videos unveiling the latest openings in Shenyang and Yinchuan. In fact many new railway stations and lines have opened all along the trunk grid over the past five years including in Xi’an, Chengdu, Guangzhou, Shenzhen, Shanghai, and Ningxia. Spanning thousands of miles, and passing busy urban areas, challenging fords, and through steep mountains, the China Railway Corporation implemented stringent national standards to create efficiency and uniformity in administration, architectural planning, engineering design and specification, manufacturing, supply chain development and delivery, research and development. Mammoth-sized rail-line placement machinery was studied, modeled and field-tested.

According to New China TV, each region also has its unique subsurface and environmental challenges. For instance, CGTN reporter Guan Yang describes the special challenges in Shenyang’s icy northern region, including temperatures reaching -40 degrees Celsius, the seasonal freeze-thaw, and the need to install soil-subsidence monitoring stations to measure swelling of the soil. Maintenance and operations can also heap on extra costs, however, the government asserts that this line is needed because of the numbers of people traveling from the northeast who work in Beijing. Now their travel times can be cut in half, important considering that Shenyang passes through the manufacturing hub of China.

In fact eliminating traffic congestion and bottlenecks is a big part in the need for designing HSR decades in advance. According to Railroads Express, “Since 2008… passenger volume has grown 8.5% each year. As a result, China now produces more passenger ridership per kilometer than all of Europe and Japanese high-speed network.” In any event the effect on domestic air travel is a huge drop in ridership because the train stations are often designed as multi-modal transportation hubs located along existing rail corridors more readily accessible to the public. With reduced air-travel, China can also better easily monitor or repurpose the air-space.

However insofar as the debt China is accruing with respect to its huge investments, the capitalists may shake their heads and tug at their beards. Its like sending an indigent person in for the government to pay for removal of its metastatic tumor, including treatment followup with chemotherapy and radiation. Which sane person would do that in today’s world? Which kind lawyer or share-trust would support such a handicap? Is it not why there are so many “extras” dying from COVID-19?

At best, from the capitalist standpoint, the accrual in benefits is based not necessarily on amortizable factors, such as externalized benefits to the community as a whole. Workers being able to visit their families more frequently, business travel requiring less time, vacationers being able to travel to new destinations, foreign tourists able to virtually map their itinerary, and citizen-journalists eager to gain experience have lots to gab about. In fact if China can recoup its costs at all, it may be from the intangible socio-economic and political benefits in appreciating that the country is better integrated and has overcome historical hurdles.

On the other hand, if from the financial standpoint, even with advances in ingenuity, rail communications, and research partnerships, the China Railway Corporation must eventually be sold off to one of America’s billionaires, at least at this point in time, there is no intention for China to pull the brakes on railway development. Indeed, the Chinese Railway Network is already working hard on its next 5-year plan which is to densify its high-speed rail corridors to “Eight verticals and Eight horizontals.” As the nation with the most length laid in high-speed rail line, the PRC hopes to utilize its design-build standards to export production for other hopeful consumers.

In any event, its clear that neighboring ASEAN nations have already taken notice. CNA recently announced in “Singapore unveils Green Plan 2030” that the island intends to increase its bright-green glow by speeding up its building and infrastructure capabilities through fulfilling “ambitious and concrete goals for sustainable development that cuts across areas that include transport and waste management.” Essentially it unveiled new plans for strengthening its multi-modal rapid transit grid. The same is reported by Power Train on India which recently unveiled feasibility studies and development plans for 7 proposed bullet train routes. New rapid rail lines are being touted and advocated as well in the Philippines, South Korea, and Vietnam, while HSR improvements will continue in Japan and Taiwan.

As China has achieved a benchmark in the world bullet train industry, faraway nations even in the European Union are taking notice. While ASEAN envy may be evident, there is also ill-disguised admiration and for a good cause: China’s HSR augurs well in how to lower the world’s carbon footprint while creating jobs and eliminating poverty. And in the process, it has achieved its UN2030 Sustainable Development goals earlier.