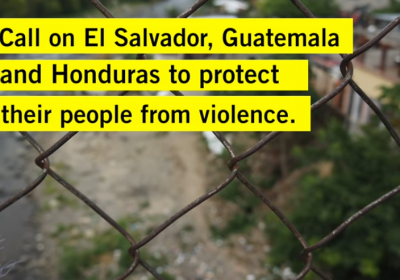 According to the Center for Migration Studies (CMS), violence and organized crime from the Northern Triangle of Central America is creating a crisis at the border.  The countries of Guatemala, Honduras, and El Salvador, known as the Northern Triangle, or the Isthmus due to common cultural ties, are responsible for the largest flows in refugees. To solve the immigration problem, the United States needs to consider diplomatic approaches.

However the Trump Administration is fixated on protecting the U.S.-Mexican border with a proposed wall. President Trump’s determination on funding the wall from billions of diverted U.S. taxpayer dollars has already created the longest government shutdown in history. Meanwhile the caravans of thousands of migrants are desperately on the march. CMS executive director Donald Kerwin states:

The real crisis exists in the Northern Triangle of Central America, where organized crime threatens residents with impunity and there exists a lack of stability and opportunity.

While most American nongovernmental organizations point out that the wall prevents criminals, thieves, and drug traffickers from entering the United States, no one is asking why so many are forced to such ends.  In particular, Americans are being kept in the dark about why such large migrations are occurring, why they are repeatedly being told that Central American refugees are criminals, when in fact the majority are ordinary people fleeing from unsafe environments?

The situation is tragic and also incredibly dangerous for those undertaking the overland two-thousand mile journey. Often they must submit to the whims of human smugglers who confiscate personal belongings including passports, drivers licenses, and other identification. There are horror stories of smugglers leaving their human cargo in the middle of the desert. Heinous acts are committed including rape of women and children, or redirecting migrants to underground factories where people are used as slave labor, forced to become sex workers, or have their organs cut out.

According to Amnesty International, the corruption in Honduras is so rampant that criminal gangs operate in daylight in the capital, Tegucigalpa. Ordinary middle class workers, such as bus drivers are held up for extortion money, while whole families may become internally displaced to seek relief from kidnappings, turf wars, or gang curfews. But the worst part is that those returnees to their homeland are often murdered in revenge.

Vicious criminal gangs control large areas of these countries—forcing young boys to join them, girls to become sexual slaves, shop owners and bus drivers to pay hefty taxes and killing anyone who dares to say no. By failing to tackle this crisis, governments are effectively forcing thousands of people to run north in search of safety.

Amnesty International (AI) is advocating that the governments of Guatamala, Honduras, and El Salvador offer guarantees for protection. AI is petitioning these governments to assume greater responsibility for deportees—refugees captured and forced to return to their country of origin—who risk being killed for having spoken out on corruption or deprived of their rights as citizens. Deportations from Mexico have increased dramatically, up to 200 percent, over the past decade with hundreds of thousands of people trapped in limbo, especially young people. With little to hope for from within their country, the dream of resettling in another country becomes a goal worthy of repeated attempts despite the risks. The Washington Office on Latin America (WOLA)’s report “Children and Families Fleeing Violence” emphasizes how violence, gang activity, and murder are daily occurrences. For instance, security forces often exacerbate violence, such as by taking sides, or conducting extrajudicial executions and other abuses. Reasons that citizens flee the Northern Triangle also include domestic violence. According to a U.N. report, the Northern Triangle contains the top-ranked countries with the highest female homicide rates between 2007-2012, with El Salvador ranked number one, Honduras number two, and Guatemala number four. In Guatemala, of over 50,000 cases of violence against women or femicide reported, only 983—about two percent—culminated with a prison sentence for the aggressor.

Coupled with the insecurity of urban areas controlled by street gangs are maras who negatively quality of life and compound the lack of economic insecurity in a region where the poverty rate is up to 60 percent. Over the past few years, drought has further aggravated daily living conditions for subsistence farmers and day laborers. The stability of the family also affects children, of whom an estimated one million are referred to as ninis, neither in school nor employed. WOLA states:

The inability to find a job, advance through education or support themselves through self-employment or farming, compels many young Central Americans to leave their homes and communities.

However the report glosses over the root causes for flight according to the Violence of Development. Since the 1990s there have been rollbacks in 1960s land reforms with encouragement by the World Bank. Since the 2000s, transnational companies have increasingly forced small farmers—even killed campesinos—off from farming on land once theirs. As families relocate to cities and compete in urban surroundings, children are then recruited into the gang and drug cartels. In that context, local transportistas—drug smuggling operations doing the bidding of transnational drug trafficking cartels—is only a secondary effect of the neoliberal maelstrom. On the generous US aid package of $750 million in fiscal year 2016 for the Northern Triangle, Central American expert Martin Mowforth comments that even with all kinds of recommendations for reducing crime and investigating corruption:

The US government has a history of directing its aid through anti-democratic (and occasionally clandestine) agencies such as the National Endowment for Democracy which tends to funnel funds to economically neoliberal and politically right wing causes. [comment (2)]

In fact Amnesty International also asks why the push factors in migration remain so high: In “Whose Prosperity” they ask, where is the money going?

According to Rights Action director Grahame Russell, the mainstream media is complicit in ignoring the connection between refugee flight and the underlying causes in their home countries that force them to flee. RightsAction.org believes that U.S., Canada, and other actors in the international community are part of the problem. Yet human rights activists, advocates, and most experts tend to focus only on the plight of the refugees themselves.

Everyone is encouraged to ignore the elephant in the room, Russell believes, which is how the Western elites have, for generations, taken advantage of the Northern Triangle to build business relationships favorable to the World Bank and Inter-American Development Bank.

The power and wealth of the Honduran and Guatamalan economic elites, governments, military and police derive primarily from their relations with this “international community”, not from the democratic will of the people.

Rights Action is one of a handful of organizations around the world which recognize how the exploitation of refugee homelands relates to intentional displacement of native populations whether it is for farmland, water rights, or mineral rights. For instance, in “Carbon Blood Money in Honduras,” activist Rosie Wong investigates how the government of Honduras reversed progressive land reforms, stifling what had been thriving farming cooperatives and small land ownerships. When farmers try to stay and defend their lands, private mercenaries are hired to kill the campesinos. During her travels she wrote:

The irony is that giant palm oil plantations, such as Dinant, are approved to receive international funds for carbon mitigation under the UN’s Clean Development Mechanism. Because growing palm oil and recycling the waste is carbon considered “clean,” the corporations are awarded tradeable carbon credits; however it ignores mass deforestation, displacement of organic farmers, the local needs for locally grown food, and the bloodshed caused in killing campesinos. There is nothing too clean in profiting off the suffering and pain of former communities so that private development schemes play out.

Rights Action has historically fought to defend the Central American peoples against repression and other injustices caused by developments including in mining, growing african palm, dam-building, and tourism. Their 2019 work plan is to support more education, activism, and social justice work to raise awareness on how North American companies exploit countries such as Honduras and Guatemala.

Rights Action’s report is corroborated in “The Second Implosion of Central America” by William I. Robinson, whose historical and economic perspective on the matter is that this is evidence of a spiraling new economic crisis attributable to accumulation of phenomenal wealth in the hands of a few but where non-binding players—-such as the masses of poor people—are part of its collateral damage, along with local ecology and livelihoods.

In the latest round of global investment projects: a lot more palm plantations; gold, silver, and other mining projects; as well as fossil fuel development. Anyone daring to stand in the way faces government harassment, death threats, even assassinations, despite the fact that these companies pollute the surface water with impunity, and generally lay waste to the environment with only a modicum of visual restoration. Rural people are forced to move to urban areas, which admittedly are vastly improved with the expansion of transnational retail stores such as Walmart and fast food chains, but thousands of small traders, local manufacturers, and food producers struggle to survive in once guaranteed niches. According to NACLA:

A staggering 72 percent of workers in the region labor in precarious work arrangements, often in the informal economy, and some seven out of every eight new jobs are precarious.

The neoliberal capitalist market structure cannot absorb the growth in urban population and is unwilling to accommodate the inequity, so vast numbers are forced to look for work by migrating. The boom-bust cycle has happened before, but according to Williams, the new crisis is reaching global proportions, indicative of deep structural flaws and characterized by social polarization and over-accumulation:

Given unprecedented levels of inequality worldwide, the global market cannot absorb the rising output of the global economy, which is reaching limits to further expansion. The transnational capitalist class cannot find outlets to profitably reinvest the trillions of dollars in accumulated profits.

Can the nature of capitalism itself be the driver of boom-bust cycles, because the market requires not just profit but hand-over profits for the stockmarket, for the board, and for the owner, and because stock market capitalism is reliant on an ever-increasing profit dynamic? Perhaps it is this profit dynamic which has created millions of rootless, insecure migrants with little hope for a better future, since they have been robbed of their farms, while their urban opportunities are nil, their children’s opportunity to go to college are nil, and while drought dampens their opportunities further.

Alternative media and think-tanks are exposing the real roots behind the Central American caravans, and it is linked to the excoriations of capitalism, where disenfranchised communities are merely seen as collateral damage, and where the environment costs are externalized. This relationship is not covered by the media nor the issues carefully or critically examined. Like the refugees of Syria, increasingly these people are seen as refuse, but now they may be killed on the spot if they try to escape to America’s shores.

As more and more money is spent on the border wall, and other government programs are commensurately defunded, people should take notice that under the February 15 Emergency Order, President Trump is mobilizing troops to “improve border security.” Troops will likely be directed to take hostile action against immigrants including killing them. The comparatively defenseless migrant caravans have no where to flee. If they return home, they face violence; if they stay in Mexico, they are deported; and if they arrive in the United States, they are imprisoned in detention centers.