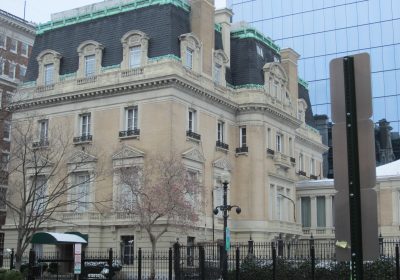 Infowars are damaging the potential for access to public information of the war situation in Ukraine from the Russian perspective. RT (Ruptly), a state-owned media, has never promoted violence or hate-speech, but is largely focused on presenting balanced news and perspectives as a counterbalance to the U.S. mainstream media. Since the Russian special operations commenced on February 24, 2022, the U.S., which has various vested interests in faraway Ukraine, has placed a variety of stringent sanctions upon Russia.

Since last week, RT America (formerly Russia Today) was ordered to shut down its media offices in Washington, D.C. This is in addition to RT shut downs in Europe and Australia. Google/YouTube also turned off media access to all RT America channels including RT, RT News Broadcast, and RT News Livestream 24/7. Staff laid off include local favorites, such as hipster comedian Lee Camp, and also independent news reporters such as hosts from The Grayzone, Max Blumenthal and Anya Parampil.

Here is where RT broadcasts can still be found. RT.com is the online news service. Ruptly.tv/en provides up to date videos and live events. Unlike before, however, 24/7 live feeds are limited. RT can also be found at Rumble.com (Rumble.com/c/RTNews), and at Odysee (Odysee.com/@RT:fd?view=content). Both channels feature live streaming, with Odysee (Odysee.com/@ActualidadRT:9/rt_en_vivo:a) offering a Spanish-speakers channel.

Watching live is the best way to access such favorite political talk shows as CrossTalk, Worlds Apart, and Going Underground. The Grayzone has its own website and YT Channel; and LeeCamp.com is hoping to expand hosting capabilities. Many independent journalists are now publishing in hubs such as substack.com, but the RT America jetset is joining with other alternative media groups in a new hub, Rad Indie Media, billed as “the antidote to corporate media.” (Rad Indie Media is not the open publishing platform Indymedia.org).

For media journalists who are searching for other live media feeds, India Today is a good option on YT with ground-zero reporting and updates all day long. War analysis and live feeds are also offered by CGTN. VeteransToday.com provides a transcription of Russia President Putin’s historic speech on February 21, 2022, as does Michael Rossi Poli Sci on YT. Rossi‘s translations on speeches include Ukraine President Zelensky, and other diplomatic luminaries. Democracy Now! is also offering some solid reports.

However without RT readily available, Americans are not going to be aware if, when, or how the Russians decide to take cues from the Chinese. For instance in a recent Worlds Apart segment, host Oksana Boyko discussed with Dr. Yi Wei Wang of Renmin University ways to overcome the limitations of search engines owned by Google. The recent censorships demonstrate the need for developing independent search engines along with independent social media, such as the People’s Republic of China has, to protect national privacy. Further interesting topics included decoupling from the dollar-based hegemony, and semiconductor chip development—stuff we would never hear on mainstream media.

Regarding protecting press freedom, PressTV “state-owned by Iran” was banned last year; will India Today “state-owned” be next? What about CGTN “China state-owned”? Why not any other nation with objectionable policies and human rights violations? Which journalists will find it “impossible” to find relevant work? For minority women of color, such as AGN, the reliance on name-based networking, sexism, nepotism, and racial prejudice, are already so rank that the chance to work in media is limited. It’s not uncommon to see people turn their backs on Asian-American journalists or refuse to engage with them whatsoever, even when they are on the scene faithfully rolling away on the footage.

Only through more free and open media can people piece together truths, develop compassion and empathy, and become more tolerant of differences. Instead, we are allowing post-colonial sectarianism to flourish in the United States, which was founded upon principles of freedom, tolerance, and equality for everyone. As Psychology Today stated, “Cancellation is the new blacklist.” Ironically, what appears to be the sheepdog of social justice contains the wolfishly violent, unforgiving, dogmatic streaks of intolerance. As Grace Daniel describes it, it is based less on fact than on zealotry that singles out persons not behaviors, and even with the unstated goal to hijack or replace organizational leadership.

“This identity-based gatekeeping is a result of the presupposition in critical social justice that all truth is ‘positional.’ Therefore, only those who have a certain ‘social position’ due to their identity can perceive or speak truth on topics related to their identity.” — Grace Daniel, “My woke employees tried to cancel me,” DailySignal.com

Censorship is harmful for the American citizens who want to learn about the issues from both sides, particularly from the human dimension, in order that the war is not escalated or prolonged, and so that peaceful solutions are envisioned. A prolonged war will lead to the kind of balkanization of Ukraine that has occurred in 1990s Bosnia-Serbia, 2000s Afghanistan, 2010s Syria, and elsewhere. Only through alternative news can we learn how or why Ukraine President Zelensky or the United States intends war escalation. A media blackout deprives the public of the human story and context of Ukraine’s Donbass region. It downplays any humanitarian aid provided by Russia along U.N. designated Green Corridors. It denies to reporters a comparison of historical facts, exposure to details on human rights violations, statistics, or what kinds of negotiations the Russians desire or are willing to undertake. It restricts the narrative to the central one perpetuated by the Western elite and backed by its strongholds such as at the World Economic Forum, World Bank, and NATO.

The implications of censorship are hysteria and hostility against people, something Asian-Americans are already familiar with even before the Great Reset began in 2020. However it is surprising to see the creation of Otherism being manufactured against Russians who often share deep racial and cultural ties with Europe. Aside from media censorship, there are reports of closing down venues previously booked for Russian entertainers, ballet company, and symphonies. Charlotte Dubenskij found in the “cancel Russia” contest:

“They have public funding and in the eyes of the world, talking about the Bolshoi and talking about the Russian state is the same thing.” — Laurent Bayle, Former Director-General, Philharmonie de Paris, “Cancel culture cancels culture,” RT, March 11, 2022

Targeting of civilians who do not denounce Putin vehemently enough is political coercion, but to make matters worse, the tech-giants are fostering hate-speech against the Russian President. Social media has adopted an ambivalent policy on hate speech against Russia or Russian officials. Since 2020, the normalization of wokeness ideology has spurred a surge of spurning of traditional values and logic in favor of emotionalism and tribalism. While cancel culture is conducted in the name of social justice, politicians have discovered how it can be weaponised to enforce vigilantism and mass-formation psychosis. With such distractions the politicians can continue to rob the treasury while the media scarcely covers it.

This is the clear and present danger when the public is openly stirred via the propagandistic media to focus on demonizing Russia President Putin, rather than explore any legitimate concerns which Russia had with the expansion of NATO (sponsored by the United States) into a number of former Soviet-satellite countries along Russia’s western border. The arms buildup, as AGN previously reported, has been extreme in Ukraine, with additional reports of American citizens being hired to serve in the Ukraine’s state agencies and in state jobs.

The logical questions that American tax-payers ought to be asking are: Why is the U.S. so involved in foreign countries so far from home? What are the goals in the creation of Ukraine as a client-state? What are the dangers in a long, protracted war in the Ukraine? What options for peace are there, and how are they being pursued? Who is available to help in negotiated peacetalks? How soon can that be expected to happen? Will anti-war Americans be allowed to share their views with legislators or will they be blacklisted and scapegoated?

Such logical questions and explorations are routinely ignored by the mainstream media, such as during the long war in Afghanistan, or wars in Libya, Iraq, and Syria. Many of today’s youth are so conditioned to obey and ignore the large issues that they readily self-censor, avoid conversation on politics or religion, and are demonstrably incapable of independently formulating any kind of dissent, let alone questioning authority. Even with the world at the brink of World War III, this is why such collective punishment on Russians, Russian-Americans, and RT News will ultimately boomerang against all Americans in their relentless gamified march away from the death throes of their once-great nation.

Photo by AGN, Russian Embassy only a few blocks north of the White House, closely monitored by Five Eyes.