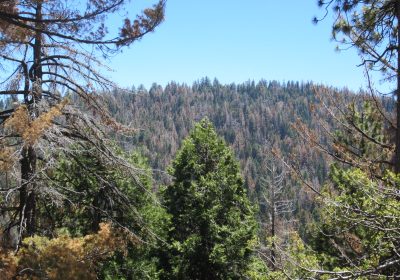 There is no doubt that the drought over the past several years has hit the Sierra Nevada forests hard. Any visitor to the Kings Canyon National Park will see signs of the devastation just about everywhere. On fly-overs, extensive stands of yellowish-brown trees dominate the landscape especially in the southern Sierra Nevada forests. Tourists are having to wait in car queus along routes while crews inside the park circle around with excavators to safely remove dead or dying trees. The sound of chain-saws is an unpleasant reminder of the number of zombie-like trees drained of their functionality by bark beetles. The negative impacts on the Sierra mountain forests stem primarily from drought which has visited California yearly since 2011. (A time-lapse is visible here). Even with El Niño rainfall last year the snow that replenishes the mountain snowpack fell to the north rather than the south and central Sierra Nevada. Less than normal snowfall meant less snowmelt in central and south valley reservoirs.

For instance, while Fresno received almost 15 inches of rain between September 2015 to May 2016, water reservoirs remain at record low levels. To make matters worse, politicians have been arguing among themselves how to deal with the crisis, whether to build more reservoirs at higher elevations or to build the Delta tunnels project.

In the Central Valley, with huge local farm investments, the media has largely focused on mitigating agricultural losses. Farmers are more reliant than ever on pumping from ever-deepening groundwater reserves or allowing their land to fallow. Farmers are either borrowing money for drilling deeper wells or buying water from irrigation districts at exorbitant prices. Seasonal farm laborers are moving to Minnesota where there is more work to be had.

Nonetheless, the unfolding catastrophe in the forests is raising alarm bells. Lead government agencies such as the Forest Service, USDA, Park Service, State of California, and NOAA have teamed up to provide up-to-date news, coordination, information on impacts, and share ideas on mitigation, such as at the California Drought website.

The unhealthy state of the coniferous trees in the Sierra Nevada and National Park forests are amply apparent. Even AGN learned how to spot rudimentary symptoms of bark beetle infestation after several days outdoors. A coniferous tree likely attacked by bark beetles from midtrunk, then spread up and down; little can be done to save it. The problem is that there are over 600 beetle species in the United States and Canada with approximately 200 in California alone, according to the University of California. Beetles prey on favorite trees, however cross-over adaptations are not uncommon. For instance, engraver beetles attack firs and pines; mountain and pine bark beetles attack a variety of pines such as lodge pole, sugar, or ponderosa. According to the UC-Integrated Pest Management:

Bark beetles frequently attack trees weakened by drought, disease, injuries, or other factors that may stress the tree. Bark beetles can contribute to the decline and eventual death of trees; however only a few aggressive species are known to be the sole cause of tree  mortality.

In other words, tiny insects like beetles and carpenter ants normally do not pose a threat to healthy forests. Winter cold temperatures, sticky sap from healthy trees, a healthy forest ecology including woodpeckers—all normally bring infestations under control. Sequoia Parks Conservancy told AGN this summer that while bark beetles may be the cause of tree die-offs, it’s the cumulative effects of drought that makes it a record-setting event.  Pollution rising from the Valley floor lowers tree resistance to disease. Were rainfall sufficient, the firs would produce sufficient sticky resin to trap and suffocate boring ants and beetles. Pinholes can be from beetle larvae or carpenter ants

The coniferous forest being observably dry and unhealthy, it is more disease-prone. Animals (wild fowl, bears, wolves, beaver, badgers, and cougar) in the ecosystem are virtually unseen at lower elevations. Many had moved up the range where healthier stands, such as of Lodgepole pines, planted long ago by forestry workers, provide a more suitable and attractive habitat. Beetles carve J-galleries between the bark and tree tissue, disrupting the tree’s ability to transport nutrients thereby starving it

The enormity of the emergency has not gone unnoticed by authorities. Federal, state, and local officials have been coordinating, and even integrating informational resources since 2011. One result is ongoing development of toolkits such as the California Tree Mortality website. The implications are stark for nearly all stakeholders. Californians are worried about water resource depletion; farmers fear losing their livelihoods; foresters understand the myriad of interrelated ecological threats; lumbermen wonder if the forests will be desertified. In a news release this June, Forest Service officials acknowledged that since 2010, over 66 million trees have died. The bulletin begins:

Four consecutive years of severe drought in California, a dramatic rise in bark beetle infestation and warmer temperatures are leading to historic levels of tree die-off.

However Agricultural Secretary Tom Vilsack’s overarching concern with regard to the unfolding crisis seems to be creating an adequate separate emergency fund to help combat wildfires. In an era of climate change, Vilsack is concerned that funds allocated for adaptive forest land management practices will be dwarfed and consumed by fighting massive wildfires. Frass or tailings from insects boring through bark

In fact, several years of El Niño rain and snowfall are needed to prevent massive wildfire disasters and ongoing coniferous tree epidemics. According to the San Francisco Chronicle, the California Department of Forestry and Fire Protection estimates that 20 to 40 percent of the trees are dead or dying between Calaveras County and the Kings County area near Fresno.

In Cambria, the picturesque coastal community between Big Sur and San Luis Obispo County, 80 to 85 percent of the region’s native Monterey pine forest is dead or dying. Tree mortality is also bad in the Tehachapi Mountains, in the far southern part of the state.

Even from an engineering perspective, large stands of dead trees represent marked reductions in commercially prized structural grade lumber; diseased trees are inconsistent in quality, and contain more bores, warps, or other defects.

However beyond huge wildfires, public safety concerns, and floating bark beetle clouds, there is the reality of climate change. While the U.S.D.A. and other lead progressive agencies are among the first officials to connect drought with climate change, will it be enough?

According to large grassroots organizations and environmentalist think-tanks, it isn’t, because whatever humans accomplish, such as the chopping down of 77,000 dead trees compared with 66 million dead in total, it’s just a drop in the bucket.

Director Kathryn Phillips of the Sierra Club California opined in an open letter published on August 21st, “Letter From Sacramento: The Message from the Forests: They Still Don’t Get It,” that even while the wildfires, drought, and warmer weather are indications of climate change, policy-makers seem unwilling to deal with root causes. Legislators are unwilling to provide logging industry mandates that would help save trees for future generations. She comments:

There has always been a strange disconnect between what’s actually happening in the forest and how forest policy is being crafted and carried out. The tree die-off illuminates this disconnect.

The root cause of global warming and climate change is proven by scientists, such as those working for the U.N. Intergovernmental Panel on Climate Change (UNIPCC).

From a global perspective, Bina Venkataraman in Foreign Policy writes in “The Breathtaking Beauty of Our Planet’s Destruction”:

Humanity has redrafted Earth’s landscape — and even more urgently, its atmosphere — to the point that the planet’s state of transition now reflects both control and utter chaos. Fossil fuel extraction to power civilization has reconfigured forests, oceans, and mountains…Droughts, pests, and heat waves ravage farms and forests, and rising seas threaten iconic cities. Fifteen of the 16 warmest years in the Earth’s recorded history have occurred since 2001, with 2016 on pace to be the warmest yet — a feat owed to emissions from the fuels that electrify, transport, heat, cool, and feed human society. [emphasis mine]

The artists in their aerial visual presentations from above and below on the earth’s resources dare to raise the provocative questions: how are humans changing the planet forever through its extractions, and where do we go from here? What must we do to become better stewards?

As climate experts, environmental scientists, and grassroots activists warn, aerial view of the forests devastated by bark beetles available or not, humanity is now in a race against time.