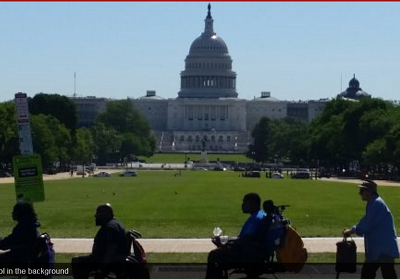 A more macabre scene could not be imagined. As the so-called caring Senators prepared to speak before the Senate and the press about the Better Care Reconciliation Act of 2017, Capitol Police were called to drag and haul away about 60 disabled people because “they were blocking the hallway.” The Independent published an article with photo of the hauling away as staffers avoided or hid from the advocates. According to leader Bruce Darling, the situation was tense, and several activists received minor cuts and bruises. He continued to interview with Pacifica radio reporters even as he was being led away, up through the elevators, and into cell-block holding areas.

It takes guts for the most vulnerable of populations to stage a protest of this type. However, ADAPT has a history of nonviolent direct action from bringing attention to unequal access for wheelchair-bound to proposed Medicaid cuts. For instance Capitol Police records indicate the group had protested and occupied Congressional office buildings back in 2005.

In fact there was a double-entendre for the date on the Hill today according to ADAPT:

June 22nd is the 18th anniversary of the 1999 Olmstead v. LC Supreme Court Ruling which first recognized disabled people’s right to live in the community.

The ruling was the first that enabled more disabled people to live in the comfort of their own homes rather than in institutions, where frequently patients are confined to their beds, and where too often they suffer other mistreatments.

Not only will AHCA take away our freedom….That lost freedom will also cost Americans much more money. The nursing facilities that people will be forced into are much more expensive than community-based services that AHCA would cut.—-Dawn Russell

While disabled people are struggling with fears of Medicaid cuts—emotions ranging from despair and anxiety to depression—former President Obama is out defending the healthcare bill he fought for. We didn’t fight for the Affordable Care Act for more than a year in the public square for any personal or political gain – we fought for it because we knew it would save lives, prevent financial misery, and ultimately set this country we love on a better, healthier course.

What’s changed between 2010 and now is the tenor and stride of the Republicans who seem to have sworn their allegiance to President Trump (and Trumpcare which for some reason sounds like an oxymoron).

The former president is pleading for bipartisan cooperation—hadn’t they done this a few times before? In fact in 2011, Senator Bernie Sanders’ amendment to the ACA passed with bipartisan support and helped double the funding for new community health clinics.

For the first time, more than ninety percent of Americans know the security of health insurance. Health care costs, while still rising, have been rising at the slowest pace in fifty years. Women can’t be charged more for their insurance, young adults can stay on their parents’ plan until they turn 26, contraceptive care and preventive care are now free. Paying more, or being denied insurance altogether due to a preexisting condition – we made that a thing of the past.

A lot more people benefited than lost out, despite all the naysayers and those who qualified for subsidies but did not want to bother learning how to apply. Now, if the Republicans get their way, everyone will basically have to start all over again from the bottom, when that’s so unnecessary.

At the same time, I was careful to say again and again that while the Affordable Care Act represented a significant step forward for America, it was not perfect, nor could it be the end of our efforts – and that if Republicans could put together a plan that is demonstrably better than the improvements we made to our health care system, that covers as many people at less cost, I would gladly and publicly support it.

However the previous President does not believe we should start from square one again nor does he believe that the Healthcare Reform bill (as House Leader Nancy Pelosi stated earlier) is a bill in good faith. Mr. Obama’s letter goes on to explain why the American Health Care or Better Reconciliation Act of 2017 is going to make Americans lose coverage, penalize those with pre-existing conditions, and revert the quality of health care administrative systems back to the days of chaos and crowded emergency room visits.

Don’t let the perfect be the enemy of the good! Express your concern about Affordable Care Act repeal and replace.

Tell your legislator or aide that you oppose the American Healthcare Act of 2017 and briefly why, such as how the ACA has helped you or someone you know. Remind them that you support your Representative and will hold her/him accountable. Thank them for supporting the ACA and for killing the American Health Care Act or Better Care Reconciliation of 2017.