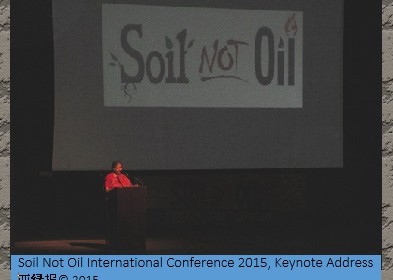 The Soil Not Oil Conference took place on September 4th & 5th (Friday & Saturday) at the Richmond Memorial Convention Center in Richmond, CA. The conference’s theme is one of progressive adaptation of the United Nations Food and Agriculture Organization (FAO)’s designation of 2015 as the International Year of Soil.

While the FAO hopes to raise awareness among civil society and decision makers about the profound importance of soil, Soil Not Oil focuses on the whys-and-hows of sustainable practices emphasizing community farms, organically grown foods, and environmental sovereignty.

Overall, the conference was really well-organized even if it felt a bit overscheduled at times. With everthing so centrally located, the atmosphere had a wonderful ambience which was heightened by the volunteer security, meals, and coordination provided by BioSafety Alliance.